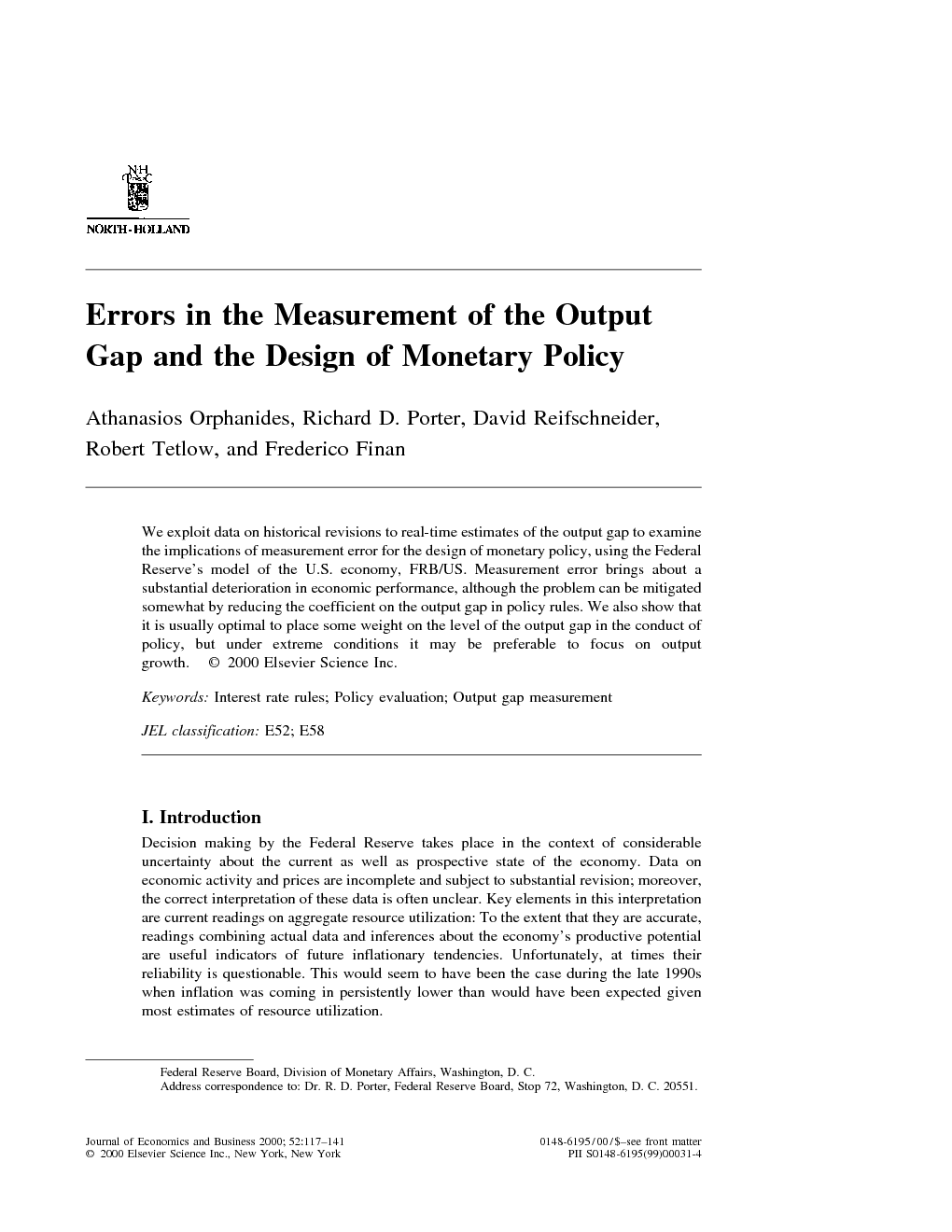 We exploit data on historical revisions to real-time estimates of the output gap to examine the implications of measurement error for the design of monetary policy, using the Federal Reserve’s model of the U.S. economy, FRB/US. Measurement error brings about a substantial deterioration in economic performance, although the problem can be mitigated somewhat by reducing the coefficient on the output gap in policy rules. We also show that it is usually optimal to place some weight on the level of the output gap in the conduct of policy, but under extreme conditions it may be preferable to focus on output growth.

Decision making by the Federal Reserve takes place in the context of considerable uncertainty about the current as well as prospective state of the economy. Data on economic activity and prices are incomplete and subject to substantial revision; moreover, the correct interpretation of these data is often unclear. Key elements in this interpretation are current readings on aggregate resource utilization: To the extent that they are accurate, readings combining actual data and inferences about the economy’s productive potential are useful indicators of future inflationary tendencies. Unfortunately, at times their reliability is questionable. This would seem to have been the case during the late 1990s when inflation was coming in persistently lower than would have been expected given most estimates of resource utilization. This paper examines the role of the output gap and other measures of aggregate resource utilization in the conduct of monetary policy, given that readings on the state of excess demand are inherently imprecise. In particular, we examine how the usefulness of the estimated output gap declines when its measurement error increases in magnitude, and how macroeconomic performance can suffer as a result, even if policymakers respond to increased uncertainty by reducing the weight placed on resource utilization in the formulation of policy. The problem we investigate is by no means new; in discussions of monetary policy and macroeconomic stabilization, researchers have recognized the difficulties associated with the measurement of potential output and resource utilization for years, beginning at least with Friedman 1947 and Friedman 1953). Many authors have highlighted the issue since then. For example, Kuttner (1994) and McCallum (1998) emphasize that monetary policy is complicated by mismeasurement of the output gap. Estrella and Mishkin (1999) and Staiger et al. (1997) draw attention to the corresponding problems associated with errors in estimates of the unemployment gap. However, quantitative assessments of the policy implications of mismeasurement have appeared only recently. Smets (1998) integrates estimation of the output trend in a policy evaluation model, and illustrates the effect of errors in this estimation on the choice of efficient simple policy rules. Using estimates of measurement error derived from real-time estimates of the output gap, Orphanides (1998) shows that such errors lead to a significant deterioration of feasible policy outcomes and cause efficient policies to be less activist. Finally, Rudebusch (1999) shows that these considerations are essential for reconciling estimated policy reaction functions and optimal policy. The contribution of this paper is twofold. First, in order to assess the measurement error problem, we follow Orphanides (1998) in taking advantage of the real-time estimates of the output gap that were historically available to the Federal Reserve. Unlike preceding papers, however, we use the Board of Governors’ staff econometric model, FRB/US to analyze the implications of output gap mismeasurement in the policy process. The size and scope of the model ensure that a large range of disturbances and propagation mechanisms in the economy are incorporated into the analysis. Second, we specify that agent expectations are model-consistent. This assumption assures that private agents take into account the response of the Federal Open Market Committee (FOMC) to uncertainty and that any results we obtain are not a manifestation of arbitrary or unstated assumptions of policymakers’ ability to systematically mislead private agents. This formulation makes our analysis less vulnerable to the Lucas critique. In this analysis, we use simple interest-rate reaction functions to characterize the setting of the federal funds rate. In particular, our focus is on rules that respond to the measured level of resource utilization (among other factors), although we also consider alternative policies that respond to growth of actual and potential output. Such simple policy rules, the Taylor rule for example, have been shown to perform well at stabilizing the economy in experiments with a variety of economic models, at least if the output gap is measured well. Based on the experience of the last 30 years, real-time assessments of the output gap have often fallen wide of the mark, as judged in hindsight with the benefit of more complete information and analysis. By contrast, revisions to measures of inflation, the other input to these rules, are much smaller. Hence, we assume that the monetary authority has only an approximate knowledge of the true current level of resource utilization in the economy, but retains a correct understanding of the true inflation outcomes. The degree to which it errs in judging the true state of excess demand is calibrated to match the historical record. Because there is some question about the actual degree of measurement uncertainty the FOMC is likely to face prospectively, we consider alternative magnitudes of measurement error, again based on historical experience. To presage our results, we find that measurement error has important effects for the appropriate conduct of the monetary authority as well as for policy performance. In most circumstances, an authority that takes explicit account of the uncertainty in the environment in which it operates is more successful than an authority that turns a blind eye to the issue. Under some circumstances it may also be optimal for policymakers to ignore almost completely measures of the level of resource utilization in the conduct of policy. The rest of this paper is organized as follows: Section II summarizes the historical record regarding revisions to the output gap. Section III discusses several features of the FRB/US model that are relevant to our analysis, and details how model simulations are used to evaluate the effect of measurement error on the macroeconomic performance yielded by alternative policy rules. Section IV presents our findings. We close with a summary of our main conclusions and some directions for future research.

This report has examined the implications of imprecision in output gap estimates for the design of monetary policy. Broadly speaking, we find that measurement error of the magnitude experienced historically has important consequences for policy, as evaluated in the context of policy rules that respond to the estimated level of aggregate resource utilization (among other factors). In particular, such error makes the output gap a less useful guide to setting the funds rate, and leads to an increase in the variability of output and inflation. Based on the experience of the 1980–1994 period, the consequences of measurement error are significant but not that pronounced. However, the experience of the 1970s suggests that there are circumstances in which the output gap is an extremely poor guide to policy—for example, when the economy undergoes significant structural change, and real-time estimates of potential output are seriously flawed. Under such conditions, the monetary authority could impart considerable unnecessary variation in output and inflation by responding strongly to (mis)estimates of excess demand and supply. One appropriate response to rising uncertainty about resource utilization is attenuation, that is, a reduction in the coefficient on the output gap in the interest rate policy rule. However, while attenuation mitigates the increase in output and inflation variability that arises from measurement error, the extent of mitigation is limited. Another possible response to uncertainty is to ignore the estimated level of resource utilization altogether in setting policy, and to instead concentrate on other economic indicators, such as output growth. Our analysis suggests that such a strategy—specifically, the use of a funds rate rule that responds to the difference between actual and trend real GDP growth in place of the output gap—yields inferior macroeconomic outcomes if the magnitude of measurement error is moderate (the base-case or small errors cases discussed in the text). However, if uncertainty about the level and growth rate of potential GDP is especially pronounced, then growth rules are superior to rules that rely on the output gap. In this paper, we calibrated the properties of measurement error to that of historical revisions to real-time estimates of the output gap and capacity utilization—an approach that strengthens the empirical relevancy of our results. However, in doing so we side-stepped the difficult issue of the causal links between historical revisions and the fundamental shocks to productivity and other factors that have hit the economy over the past 30 years: For tractability, we assumed that measurement error and fundamental shocks are uncorrelated in the simulations. An interesting (albeit ambitious) avenue for future research would be to model these links empirically, and to incorporate the complicated filtering exercise involved in such a problem into the stochastic simulations. Perhaps the most important lesson to be drawn from our analysis, however, is simply that successful monetary policy design needs to be founded on realistic informational assumptions about what policymakers can and do know when policy decisions are made. Unless such realism is incorporated into the analysis, the benefits from following activist stabilization policy may appear greater than what is likely to be achievable in practice.