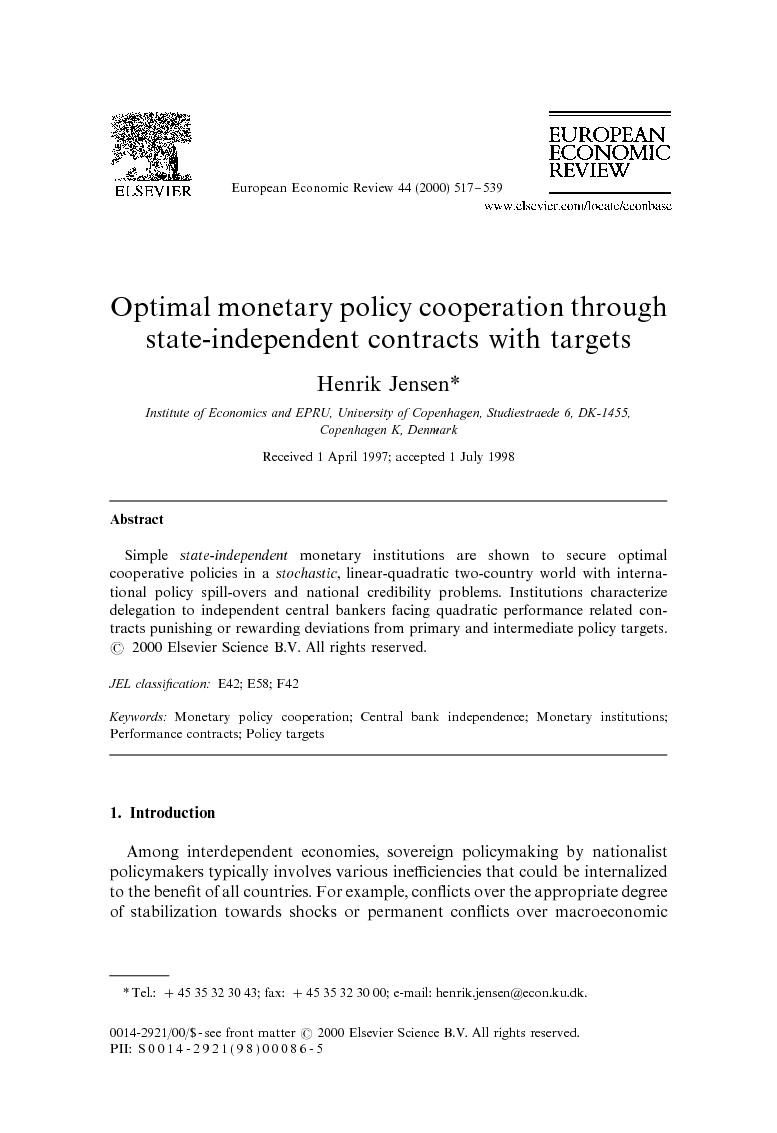 We have shown that governments in a stochastic, interdependent world can achieve optimal, cooperative monetary policies by delegating policy conduct to independent CBs facing state-independent quadratic contracts with targets. This is in contrast with existing analyses where delegation is viewed as a second best problem when it cannot be conditioned on the realizations of underlying shocks. This holds for both the linear contract solutions proposed by Persson and Tabellini, 1995, Persson and Tabellini, 1996a and Persson and Tabellini, 1996b and the proposals of appointing more or less conservative CBs; cf. Laskar, 1989 and Laskar, 1993, Dolado et al. (1994), Currie et al., 1995 and Currie et al., 1996. Apart from lifting the delegation design above second best considerations, our proposed contracts also seem more reminiscent of real-life institutions as they – broadly interpreted – portray institutions which make deviations of constant, primary or intermediate targets from particular values more or less difficult. Moreover, their qualitative features seem more politically feasible compared with existing proposals which to various degree promote inflation targeting in a much stricter sense as envisioned here (e.g., by making price stability the more or less sole objective for monetary policy). That our contracts with targets are able to achieve first-best, in contrast with other proposals, reflects a rather general and old principle. In the classic Tinbergen (1952) terminology, a policymaker can only achieve his desired values of target variables if the number of policy instruments is no less than the number of targets. This principle is at work in our model as well. When shocks are arbitrarily correlated, the governments want to remedy three distortions (the inflation bias and the international externalities arising from symmetric and asymmetric components of shocks), and the CPI-inflation contract with a target and the CPI-inflation differential contract exactly offer three instruments in institutional design . Adding more distortions to the model would then require a wider set of contracts so as to accomplish the first-best.13 Thus, even though our contracts remove the usual trade-off between credibility and flexibility present under Rogoff-conservativeness and state-independent linear contracts, this principle suggests that another trade-off may appear in the design of institutions. Namely that between efficient economic performance and the `degree of complexity' of institutions. This trade-off does not seem to be relevant in the simple world envisioned here, but even in more complicated scenarios, where it potentially would, our quadratic contracts with targets may still outperform other forms of delegation. With respect to the plans for monetary unification in Europe it should be mentioned that our proposed contracts do not require a fixed nominal exchange rate. Equivalently, under the interpretation of the model as portraying blocs of countries (each with a common currency), nor do they, e.g., advocate that countries outside the EMU should peg their currencies to the Euro (it is well-known that models of the kind used here leave little room for fixed exchange rates when asymmetric shocks are present; cf. Canzoneri et al. (1997) and Persson and Tabellini, 1995 and Persson and Tabellini, 1996a). But if fixed nominal exchange rates, for some reasons, are advantageous and is going to be a fact of life between countries or blocs, it is of importance to examine whether quadratic contracts with targets of some form are still able to secure first-best policies. With asymmetric shocks, however, such institutions must involve fiscal policy, and we leave the issue for future research. Finally, note that the current approach presumes that governments jointly set up the institution that governs CBs' behavior and that this institution always bind. This ignores potential strategic aspects of institution building, which arises as the incentives causing policymakers to deviate from cooperative policies would also cause governments to deviate from cooperative institutions. Hence, one could argue that the problem about sustainability of cooperative behavior is merely `relocated' to the institution building stage; cf. the critique McCallum (1995) and Jensen (1997) put forward against closed economy models of monetary delegation.14 We do not dismiss such strategic aspects as unimportant, but emphasize that the identification of optimal monetary institutions is of considerably interest in its own right, and that their credible implementation is still an unresolved issue.