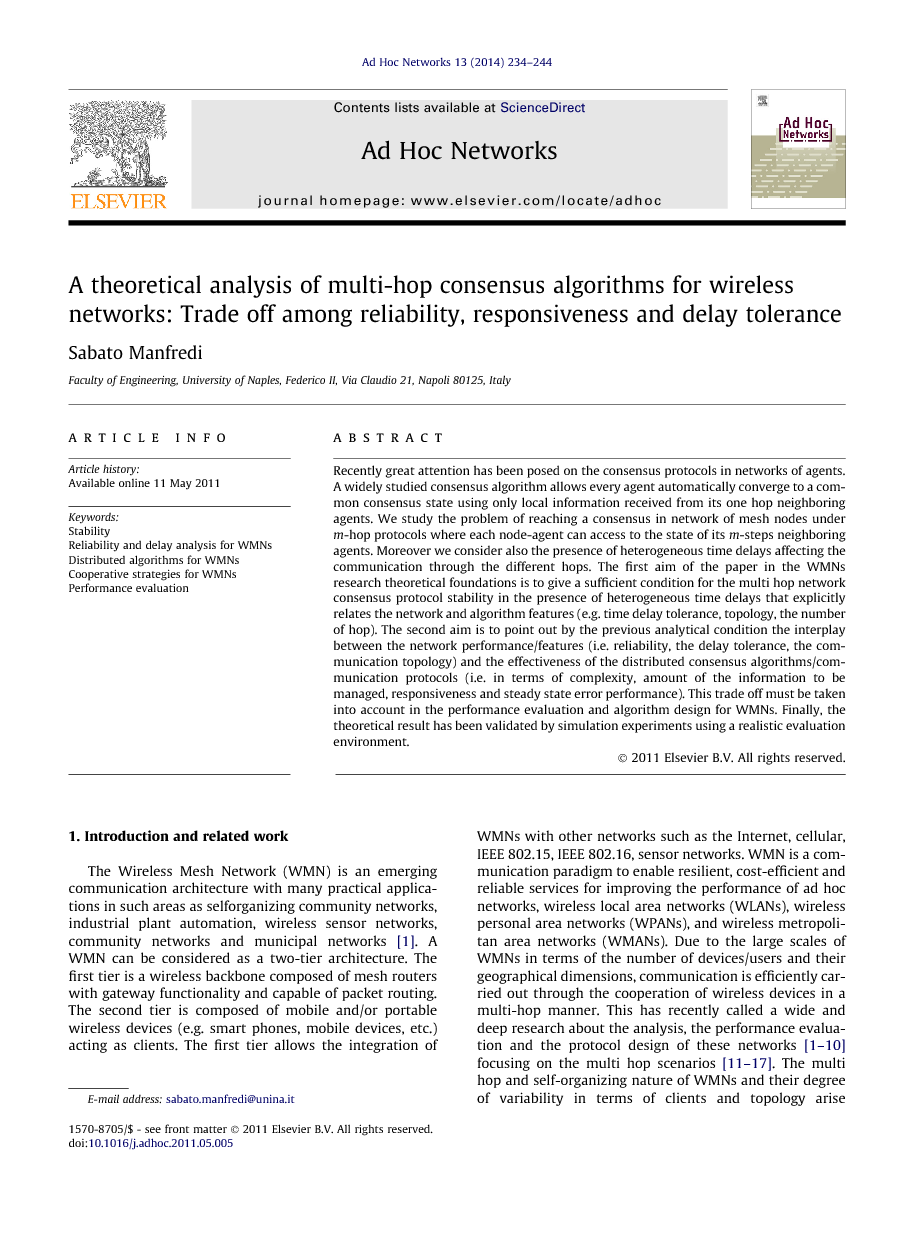 Recently great attention has been posed on the consensus protocols in networks of agents. A widely studied consensus algorithm allows every agent automatically converge to a common consensus state using only local information received from its one hop neighboring agents. We study the problem of reaching a consensus in network of mesh nodes under m-hop protocols where each node-agent can access to the state of its m-steps neighboring agents. Moreover we consider also the presence of heterogeneous time delays affecting the communication through the different hops. The first aim of the paper in the WMNs research theoretical foundations is to give a sufficient condition for the multi hop network consensus protocol stability in the presence of heterogeneous time delays that explicitly relates the network and algorithm features (e.g. time delay tolerance, topology, the number of hop). The second aim is to point out by the previous analytical condition the interplay between the network performance/features (i.e. reliability, the delay tolerance, the communication topology) and the effectiveness of the distributed consensus algorithms/communication protocols (i.e. in terms of complexity, amount of the information to be managed, responsiveness and steady state error performance). This trade off must be taken into account in the performance evaluation and algorithm design for WMNs. Finally, the theoretical result has been validated by simulation experiments using a realistic evaluation environment.

We have analyzed the problem of reaching the average consensus in WMNs under multi-hop protocols where each agent can access to the state of its m-steps neighboring agents. The presence of heterogeneous time delays is considered and a sufficient stability condition to reach a consensus is explicitly given as function of network and algorithm features. The latter analytical condition has been used for pointing out the interplay between the network performance (i.e. reliability, the delay tolerance, the communication topology) and the effectiveness of the distributed consensus protocol (i.e. in terms of responsiveness and steady state error). This interplay highlights different trade off, summarized in the follows: • the algorithm responsiveness improves for increasing number of hop m. This is particularly desired in the case of high dynamic scenario (i.e. average value tracking application) where the average value computation need to be done in a short time; • the maximum admissible time-delay for the network is inversely proportional to m resulting in a trade off between delay margin robustness, number of hop and algorithm responsiveness; • the algorithm steady state error between the average value computation and the actual average value increases with the increasing of m. Indeed increasing m, increases the number of packets in the network and their probability to be lost for collision effect with a consequently reduction of network reliability; • the mesh node computational capacity and the communication bandwidth might limit the maximum number of hops of the consensus algorithm and in turn they might affect the algorithm responsiveness; • an increasing of m yields an increase of energy consumption due to higher number of packets to be managed by the node and higher number of retransmissions for packet losses; • collision effect and node buffer size affect the network reliability and therefore the algorithm steady state error performance; • when the target is to have both high responsiveness and reduced steady state error, the node buffer size and computation capacity have to be designed in order to make up the drawbacks of the high value of m. The simulation experiments have validated the sufficient stability condition and shown up the above trade off that must taken into account in the analysis and design of cooperative strategies for WMNs. Finally, the algorithm presents a good scalability property with respect the number of nodes.