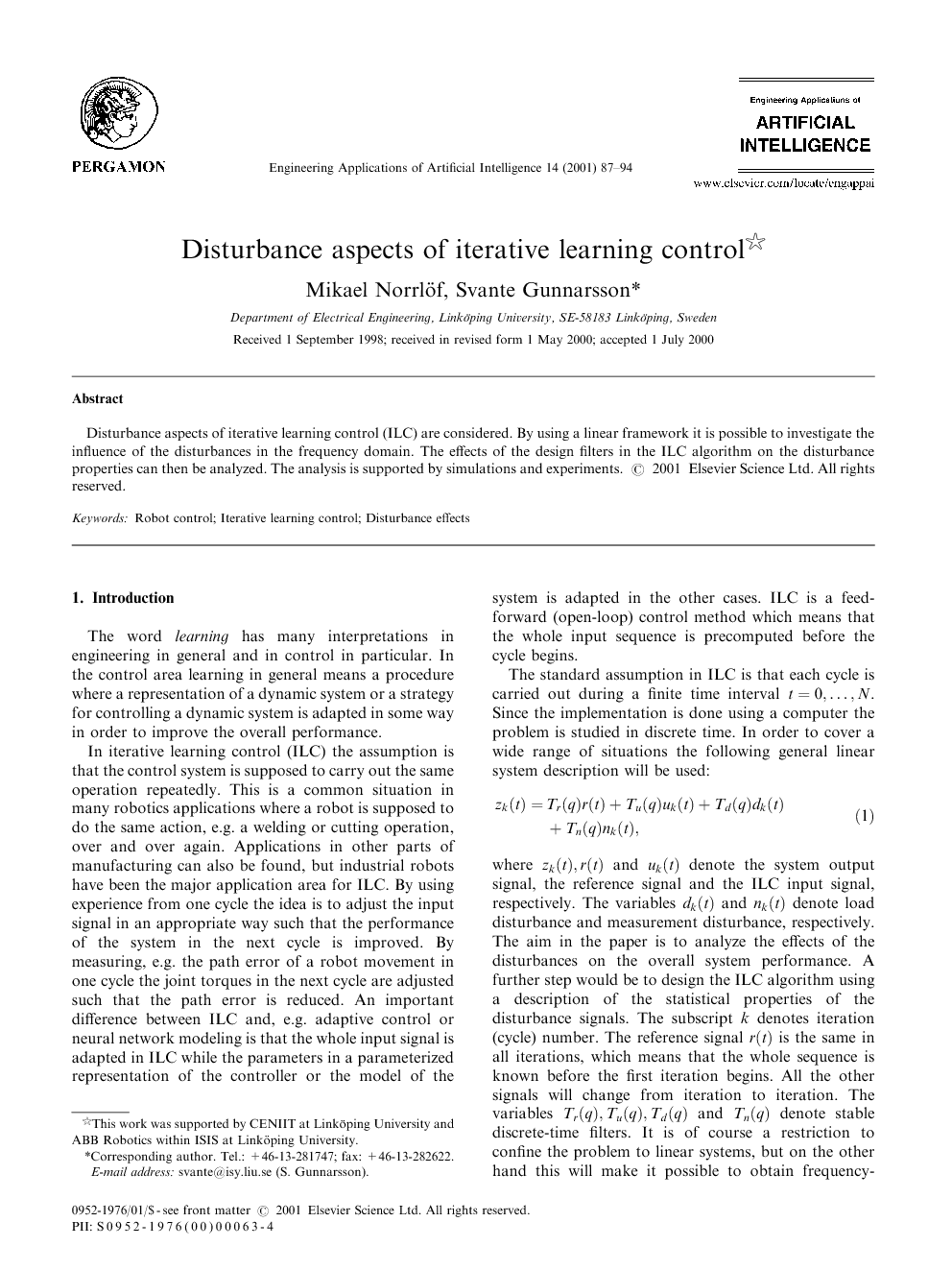 Disturbance aspects of iterative learning control (ILC) are considered. By using a linear framework it is possible to investigate the influence of the disturbances in the frequency domain. The effects of the design filters in the ILC algorithm on the disturbance properties can then be analyzed. The analysis is supported by simulations and experiments.

The word learning has many interpretations in engineering in general and in control in particular. In the control area learning in general means a procedure where a representation of a dynamic system or a strategy for controlling a dynamic system is adapted in some way in order to improve the overall performance. In iterative learning control (ILC) the assumption is that the control system is supposed to carry out the same operation repeatedly. This is a common situation in many robotics applications where a robot is supposed to do the same action, e.g. a welding or cutting operation, over and over again. Applications in other parts of manufacturing can also be found, but industrial robots have been the major application area for ILC. By using experience from one cycle the idea is to adjust the input signal in an appropriate way such that the performance of the system in the next cycle is improved. By measuring, e.g. the path error of a robot movement in one cycle the joint torques in the next cycle are adjusted such that the path error is reduced. An important difference between ILC and, e.g. adaptive control or neural network modeling is that the whole input signal is adapted in ILC while the parameters in a parameterized representation of the controller or the model of the system is adapted in the other cases. ILC is a feed-forward (open-loop) control method which means that the whole input sequence is precomputed before the cycle begins. The standard assumption in ILC is that each cycle is carried out during a finite time interval t=0,…,N. Since the implementation is done using a computer the problem is studied in discrete time. In order to cover a wide range of situations the following general linear system description will be used: equation(1) where zk(t),r(t) and uk(t) denote the system output signal, the reference signal and the ILC input signal, respectively. The variables dk(t) and nk(t) denote load disturbance and measurement disturbance, respectively. The aim in the paper is to analyze the effects of the disturbances on the overall system performance. A further step would be to design the ILC algorithm using a description of the statistical properties of the disturbance signals. The subscript k denotes iteration (cycle) number. The reference signal r(t) is the same in all iterations, which means that the whole sequence is known before the first iteration begins. All the other signals will change from iteration to iteration. The variables Tr(q),Tu(q),Td(q) and Tn(q) denote stable discrete-time filters. It is of course a restriction to confine the problem to linear systems, but on the other hand this will make it possible to obtain frequency-domain insight into the disturbance properties of ILC. In many situations such insight is useful from an engineering viewpoint. The formulation in Eq. (1) is taken from (Norrlöf, 1998), and it covers a wide class of situations ranging from an open-loop control problem to a closed-loop system operating under both feed-back and feed-forward control. In Arimoto et al. (1984), which is often referred to as one of the original papers in the field of ILC, the ILC algorithm was used to generate the input to the system directly. In the framework here this corresponds to equation(2) where G is the transfer function of the system to be controlled. In (2) and the sequel the argument of the involved transfer functions will sometimes be omitted for convenience. The case that will be considered in this paper is depicted in Fig. 1, where the signal uk(t) represents a signal added to the reference signal normally generated in the control system. Hence ILC is used as a complement to the conventional robot control system.The structure depicted in Fig. 1 corresponds to the situation equation(3) where G,F and Ff are the transfer functions of the system to be controlled and the feed-back and feed-forward regulators, respectively. A slight modification of the system structure shown in Fig. 1 is to let the ILC input signal be used as a feed-forward signal added to the control signal generated by the feed-back and feed-forward parts of the controller. This just corresponds to a redefinition of the transfer function Tu(q) in Eq. (1). The fundamental problem in ILC is to design an update algorithm for the input signal uk(t) such that the error equation(4) is reduced in some appropriate sense as the iterations proceed. A general formula for updating the ILC input signal is given by equation(5) where denotes the measured error signal i.e. equation(6) and Q and L are linear, possibly non-causal, filters. Since uk+1(t) is computed off-line, with both and uk(t) given over the whole time interval, non-causal filtering can be carried out. ILC has been an active research area for almost two decades and numerous publications have been published. Among earlier contributions one finds (Craig, 1988; Hideg, 1992; Moore, 1993; Horowitz, 1993), while recent surveys of the area of ILC are given in Moore (1998) and Bien and Xu (1998). The results presented in the paper are extensions of the results presented in Gunnarsson and Norrlöf (1997) and Norrlöf (1998). The main contribution in this paper is the frequency domain analysis of the disturbance properties of ILC. The paper is organized as follows. In Section 2 the ILC algorithm properties in general are discussed, while in 3 and 4 the effects of load and measurement disturbances are investigated. Section 5 then contains simulations that support the theoretical analysis. Experiments carried out on an industrial robot are then presented in Section 6. Finally some conclusions are given in Section 7.

Disturbance aspects of iterative learning control algorithm have been studied using frequency-domain methods. It has been shown how the choice of design filters, in particular the filter Q, affects the way load and measurement disturbances affect the performance of ILC algorithms. The results have been supported by simulations and experiments on a real robot.