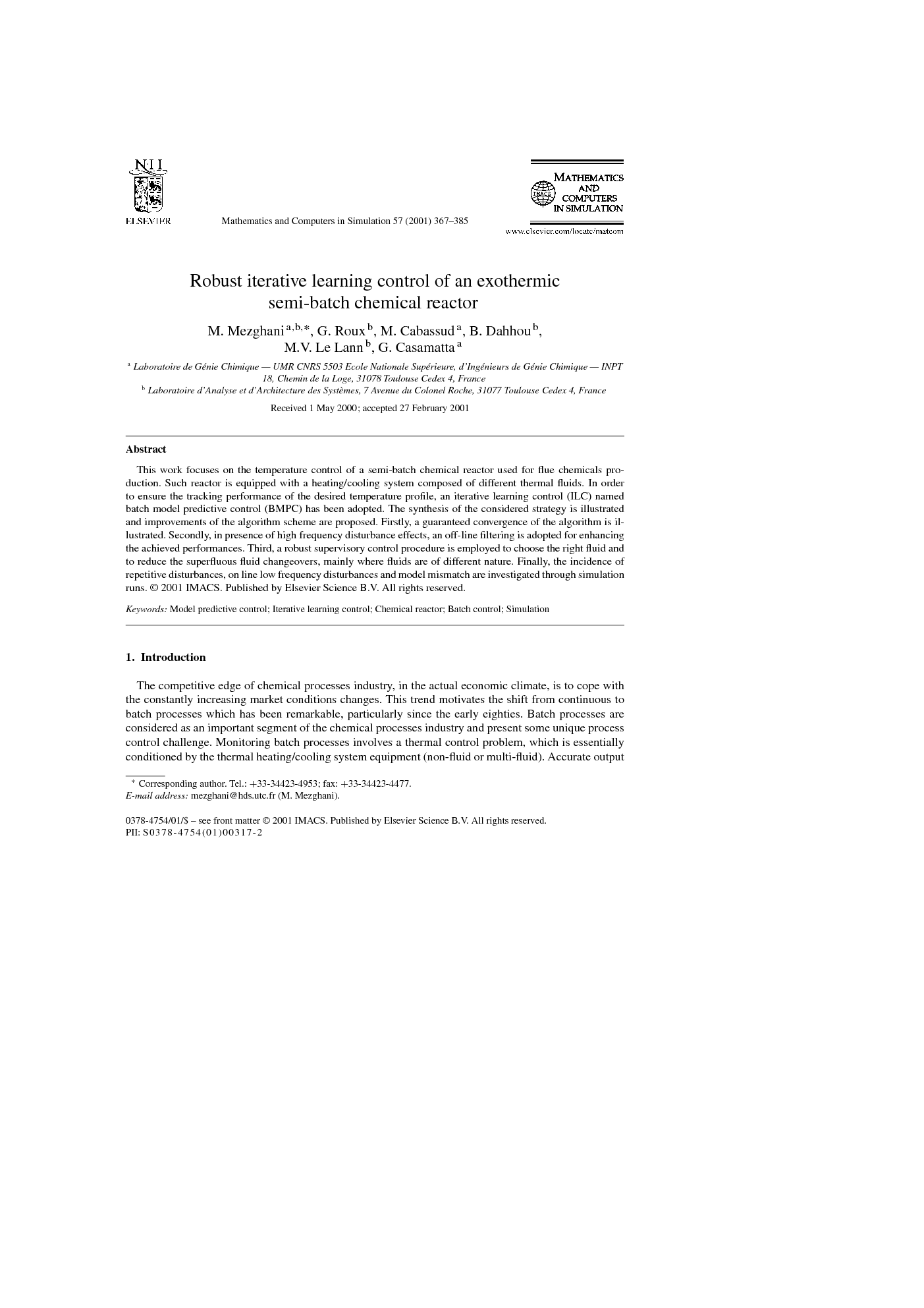 This work focuses on the temperature control of a semi-batch chemical reactor used for flue chemicals production. Such reactor is equipped with a heating/cooling system composed of different thermal fluids. In order to ensure the tracking performance of the desired temperature profile, an iterative learning control (ILC) named batch model predictive control (BMPC) has been adopted. The synthesis of the considered strategy is illustrated and improvements of the algorithm scheme are proposed. Firstly, a guaranteed convergence of the algorithm is illustrated. Secondly, in presence of high frequency disturbance effects, an off-line filtering is adopted for enhancing the achieved performances. Third, a robust supervisory control procedure is employed to choose the right fluid and to reduce the superfluous fluid changeovers, mainly where fluids are of different nature. Finally, the incidence of repetitive disturbances, on line low frequency disturbances and model mismatch are investigated through simulation runs.

The competitive edge of chemical processes industry, in the actual economic climate, is to cope with the constantly increasing market conditions changes. This trend motivates the shift from continuous to batch processes which has been remarkable, particularly since the early eighties. Batch processes are considered as an important segment of the chemical processes industry and present some unique process control challenge. Monitoring batch processes involves a thermal control problem, which is essentially conditioned by the thermal heating/cooling system equipment (non-fluid or multi-fluid). Accurate output following by a dynamical system is a frequent problem that arises in many applications such as the unit batch chemical operations, mainly when using a linear concept design. Besides, essential features of batch processes are underlined by the absence of a steady state behaviour whilst the batch, behind the non-linear variations that can be induced. While most of chemical batch operations are characterised by their repetitive behaviour, a related technique has been suggested to overcome the conventional design techniques limitations [1], [2] and [3], in order to improve the achieved performances. Such technique developed as an alternative approach under the generic name “iterative learning contro1” (ILC), where learning can be intuitively considered as a bridge between knowledge and experience: that is to say the lack of knowledge is compensated by experience. When only partial knowledge about the plant is available, learning can then be described as a process where the desired objectives are achieved by experience. The concept of ILC was originally introduced in 1984 by Arimoto et al. [4], [5] and [6], who presented an algorithm that generates the new trial control input by adding a “correction” term to the control input of the previous trial. This is the key feature that distinguishes the ILC from the conventional feedback control. The field of iterative learning control (ILC) has a relatively small, but steadily growing literature: some surveys can be found in [7], [8] and [9]. In order to improve the tracking control of batch processes, namely coping with on line disturbance removal and constraints handling, an elaborated learning control algorithm was developed by Lee et al. [10] and [11]. Such algorithm combines the predictive control enhancements with the ILC ones under the name of batch model predictive control (BMPC). Based on this advanced learning control technique (BMPC), an effective control synthesis for batch process industries will be investigated in our studies. The methodology is based on a set of repetitive simulation runs, the first run will be controlled by a conventional predictive feed-back controller (in our case the generalised predictive controller (GPC)). Then, the acquired input/output data, will be considered as the initial training data for the BMPC algorithm. Somewhere, between GPC and BMPC controllers, joint efforts will lead to improve unit batch operations. This paper will be organised as follows: Section 2 provides a brief description of the semi-batch chemical reactor, its environment and the associated thermal control strategy. Based on, the derived input/output model of the temperature mixture, the model of the whole repetitive operation is presented. In the Section 3, we define the predictor which incorporates two indexes: the batch number (k) and the time evolution (t) during the batch. In Section 4, we briefly describe the objective function and the control synthesis. Then, the proposed improvements of the BMPC strategy are presented, through a reinitialisation of the output error sequence, an off-line filtering and a robust supervisory control. In Section 5, series of simulation sets are presented to show features of the BMPC algorithm face to: noise on the simulated process input/output, repetitive disturbances, on line disturbances and model mismatch. Finally, conclusions are given.

In the initial BMPC version [10], in order to ensure a compromise between the convergence rate and performances, synthesis parameters (weighting and structure matrices (Q, R, and and ) must be manipulated carefully, and finding the convenient weighting and/or structure is often achieved after several trials. Therefore, adjustment difficulties (due to the absence of pertinent rules for choosing such matrices) disappear as soon as the proposed off-line filtering and the reinitialisation of the estimated error sequence by the previous measured tracking error sequence are considered. Moreover, the choice of the convenient covariance matrices ( and ) is not only typical for the BMPC synthesis, but also for the “linear quadratic Gaussian” (LQG) controller. Since, the operator is aware that such covariance matrices are not of fixed structure, but some synthesis parameters, as illustrated above by the disturbance internal model integration in such matrices structure ( and , see Eq. (40)). It is clear through such design, that without an important synthesis refinement of a classical controller, the ILC allows to achieve a satisfactory thermal control of batch processes according to the mentioned strategy (BMPC). The studied simulations have illustrated the improvement of the achieved performance applied to a batch chemical reactor equipped with a thermal system composed of several fluids by using an appropriate ILC. In order to evaluate the robustness of such strategy dedicated to the class of repetitive operations, various scenarios have been tested the impact of random disturbances at the process input/output, uncertainties (ΔGm=40%) affecting the physical parameters used to derive the dynamic matrix G, on line disturbances caused by a small variation of the feed component flow rate. For each scenario, we have proposed an appropriate filtering and/or integration of the disturbance internal model, in order to ensure a compromise between robust performance and learning convergence rate. It is to be underlined that such a BMPC approach is not aimed neither at improving the quality of the stoechiometric model of the carried out reaction, nor at identifying it. By other means, one run allows to enhance the next run, thereby, the field of application of such control is opened to any repetitive system of unknown dynamics.