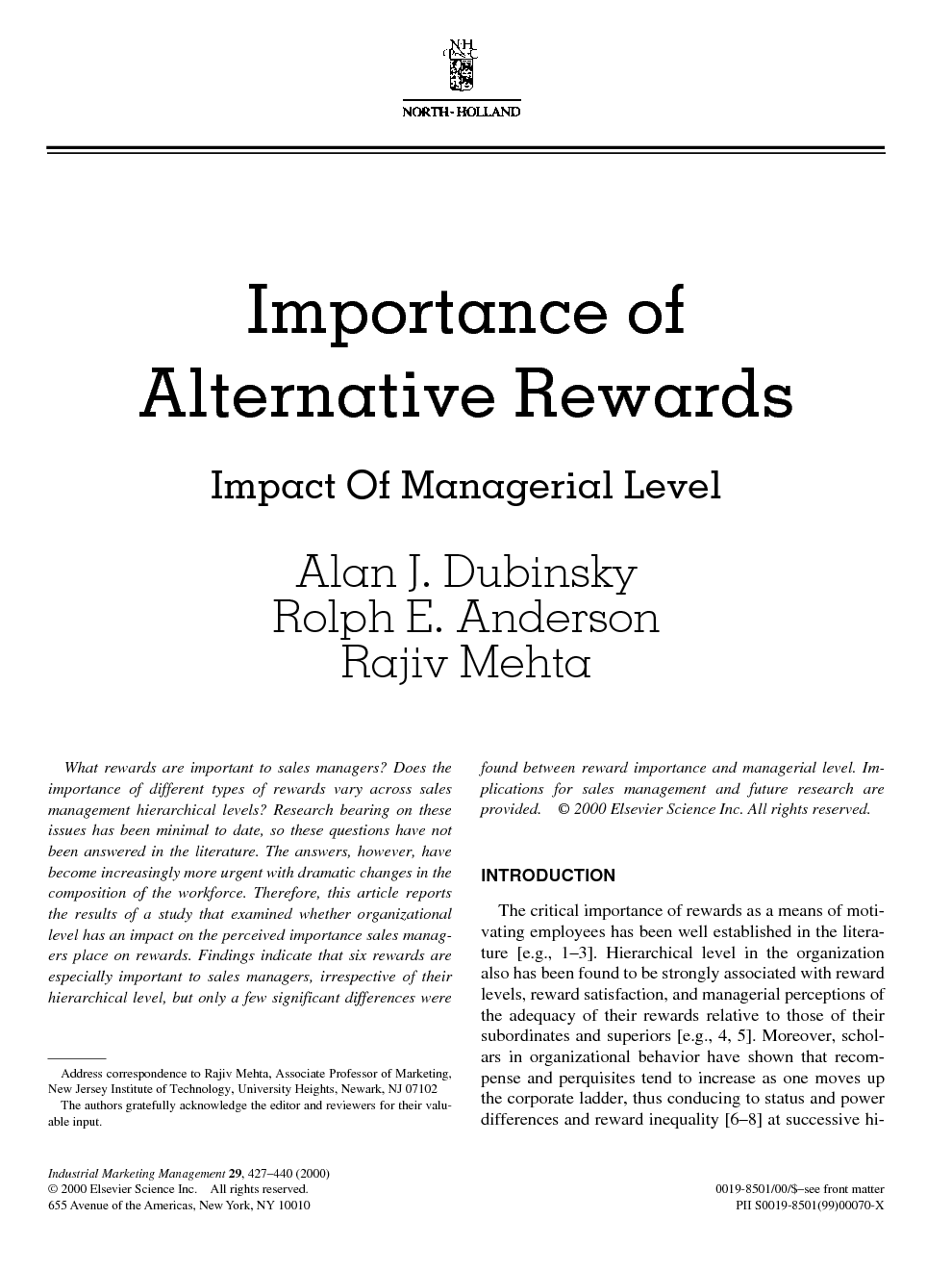 What rewards are important to sales managers? Does the importance of different types of rewards vary across sales management hierarchical levels? Research bearing on these issues has been minimal to date, so these questions have not been answered in the literature. The answers, however, have become increasingly more urgent with dramatic changes in the composition of the workforce. Therefore, this article reports the results of a study that examined whether organizational level has an impact on the perceived importance sales managers place on rewards. Findings indicate that six rewards are especially important to sales managers, irrespective of their hierarchical level, but only a few significant differences were found between reward importance and managerial level. Implications for sales management and future research are provided.

The critical importance of rewards as a means of motivating employees has been well established in the literature [e.g., 1, 2 and 3]. Hierarchical level in the organization also has been found to be strongly associated with reward levels, reward satisfaction, and managerial perceptions of the adequacy of their rewards relative to those of their subordinates and superiors [e.g., 4 and 5]. Moreover, scholars in organizational behavior have shown that recompense and perquisites tend to increase as one moves up the corporate ladder, thus conducing to status and power differences and reward inequality 6, 7 and 8 at successive hierarchical levels. For example, chief executive officer (CEO) average total compensation in 1996 rose 54% compared with a 3.2 and 3% raise for white collar and factory workers, respectively. Average CEO compensation in 1996 was an astonishing 209 times higher than that of a factory employee [9]. And according to New York City–based compensation consultants, Pearl Meyer and Partners, approximately one-half of a CEO's pay, on average, is now in the form of stock options, but the roller-coaster stock market may cause some CEOs to change their compensation preferences [10]. Published research also suggests that the importance that employees assign alternative rewards differs according to their changing needs, career stage, and organizational level 11 and 12. Over the last two decades, the profile of the typical worker has changed dramatically with expanding numbers of minorities and women at all organizational levels [13]. The U.S. work force now includes large numbers of dual-career households whose employers tend to provide similar, overlapping reward or benefit programs in which only one spouse can participate. Also, there are many older employees (perhaps remarried and starting a second family) whose needs for rewards and benefits may not be traditionally consistent with their chronological age or organizational level. In addition, benefits formerly restricted to highly compensated employees may now be considered discriminatory under the federal tax code 14 and 15, so there is new management focus on finding an array of benefits from which employees may make their own choices. Because of the wide range of family situations and reward preferences, flexible, cafeteria-type benefit systems have become an increasingly popular alternative to standardized reward systems 14 and 16. With intense pressure being placed on organizations to implement reward programs that will prove truly effective in improving productivity, renewed emphasis is being given to determining the specific reward preferences of various worker and manager categories 12 and 17.

The purpose of the present investigation was to shed some light on the issue regarding the potential impact of sales manager level on the perceived importance of organizational rewards. MANOVA findings demonstrated an overall effect of manager hierarchical level on nine typical sales manager rewards. Additionally, significant differences in the perceived importance of six of the nine rewards were observed with ANCOVA. When univariate analyses (Scheffe contrasts) were conducted on these six rewards, however, only three of the six manifested a significant difference owing to sales manager level. The findings for the contrast tests, though, were all in the hypothesized direction. The general trend in the results of this study, then, essentially reflects that hierarchical level has relatively little impact on the perceived importance sales managers assign to rewards.