عنوان انگلیسی
Is virtue its own reward? Self-sacrificial decisions for the sake of fairness
دانلود فوری مقاله + سفارش ترجمه 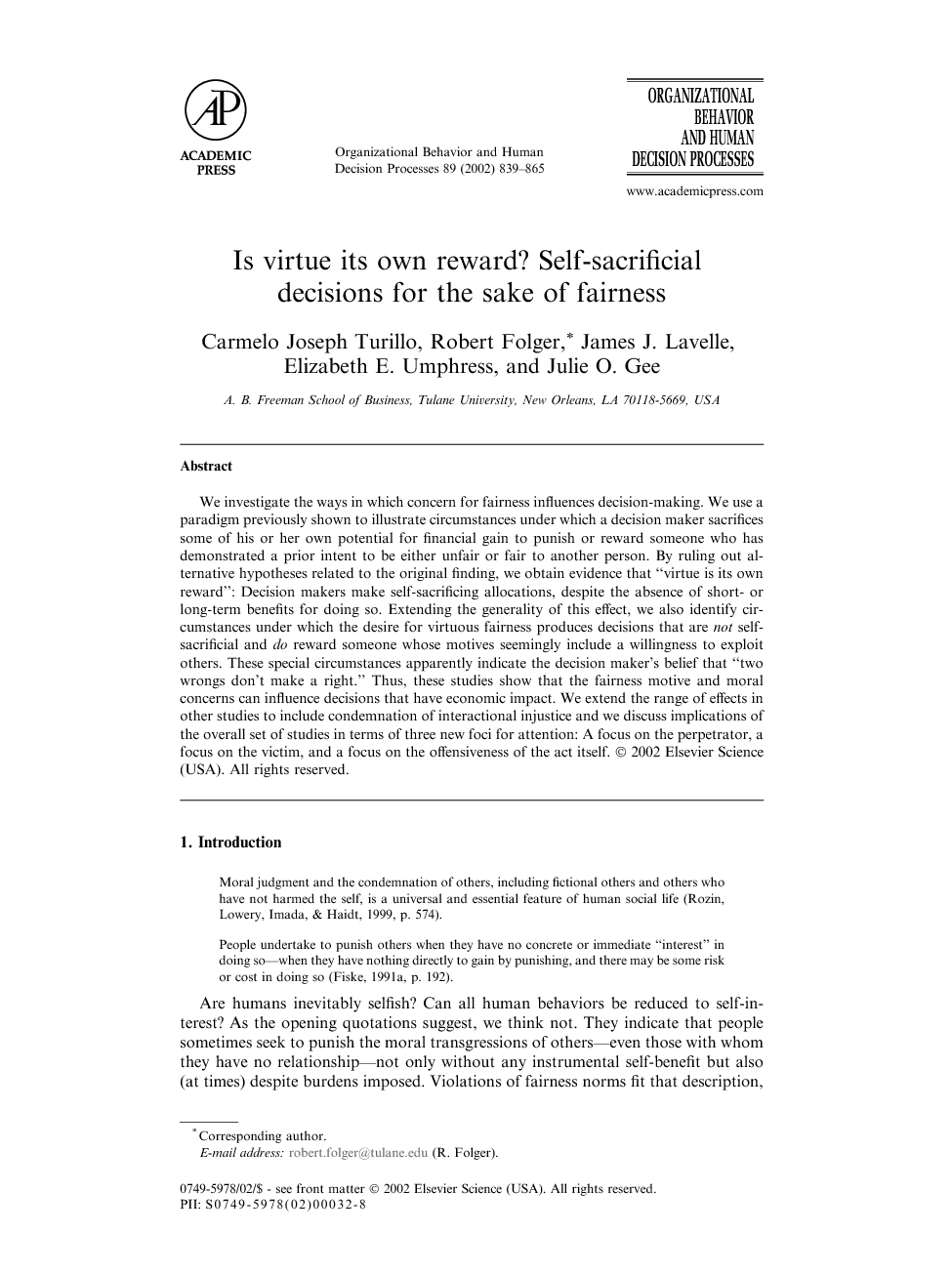 We investigate the ways in which concern for fairness influences decision-making. We use a paradigm previously shown to illustrate circumstances under which a decision maker sacrifices some of his or her own potential for financial gain to punish or reward someone who has demonstrated a prior intent to be either unfair or fair to another person. By ruling out alternative hypotheses related to the original finding, we obtain evidence that “virtue is its own reward”: Decision makers make self-sacrificing allocations, despite the absence of short- or long-term benefits for doing so. Extending the generality of this effect, we also identify circumstances under which the desire for virtuous fairness produces decisions that are not self-sacrificial and do reward someone whose motives seemingly include a willingness to exploit others. These special circumstances apparently indicate the decision maker's belief that “two wrongs don't make a right.” Thus, these studies show that the fairness motive and moral concerns can influence decisions that have economic impact. We extend the range of effects in other studies to include condemnation of interactional injustice and we discuss implications of the overall set of studies in terms of three new foci for attention: A focus on the perpetrator, a focus on the victim, and a focus on the offensiveness of the act itself.

Moral judgment and the condemnation of others, including fictional others and others who have not harmed the self, is a universal and essential feature of human social life (Rozin, Lowery, Imada, & Haidt, 1999, p. 574). People undertake to punish others when they have no concrete or immediate “interest” in doing so—when they have nothing directly to gain by punishing, and there may be some risk or cost in doing so (Fiske, 1991a, p. 192). Are humans inevitably selfish? Can all human behaviors be reduced to self-interest? As the opening quotations suggest, we think not. They indicate that people sometimes seek to punish the moral transgressions of others—even those with whom they have no relationship—not only without any instrumental self-benefit but also (at times) despite burdens imposed. Violations of fairness norms fit that description, but, as we will show, existing organizational justice literature derives fairness-oriented reactions by assuming universal self-interest. We propose that such reactions reflect the presence of endogenous “deontic emotions” (from the Greek root deon for obligation or duty)—emotions elicited by perceiving the transgression itself, just as aesthetic emotions (e.g., the enjoyment elicited by viewing a dramatic sunset) are endogenous and intrinsic to the experience itself. The intrinsic, endogenous nature of such reactions is expressed in a common colloquial expression regarding moralistic reactions: “Virtue is its own reward.” 1 To preclude self-interest, our research has respondents function as observers of a moral transgression between two parties with whom they have no relationship (i.e., as disinterested third parties in the sense of the opening quote from Fiske, 1991a). Our respondents never know the identity of either of the other two parties, the victim or the perpetrator. Respondents who express antipathy toward the perpetrator of a transgression or who punish that perpetrator at the cost of their own self-interests therefore act consistently with the opening quotes from theorists who hypothesized the existence of such behavior. In our final discussion, we speculate about possible links between our results and emergent theories on “deonance” (Folger, 2001; see also Cropanzano, Byrne, Bobocel, & Rupp, Byrne et al., 20012001), which aim to explain moral emotions and reactions to others' actions as morally creditable or blameworthy (see also the attribution-of-blame based Fairness Theory of accountability, Folger and Cropanzano, 1998 and Folger and Cropanzano, 2001). Our next section contextualizes the deontic approach by distinguishing it from two others.