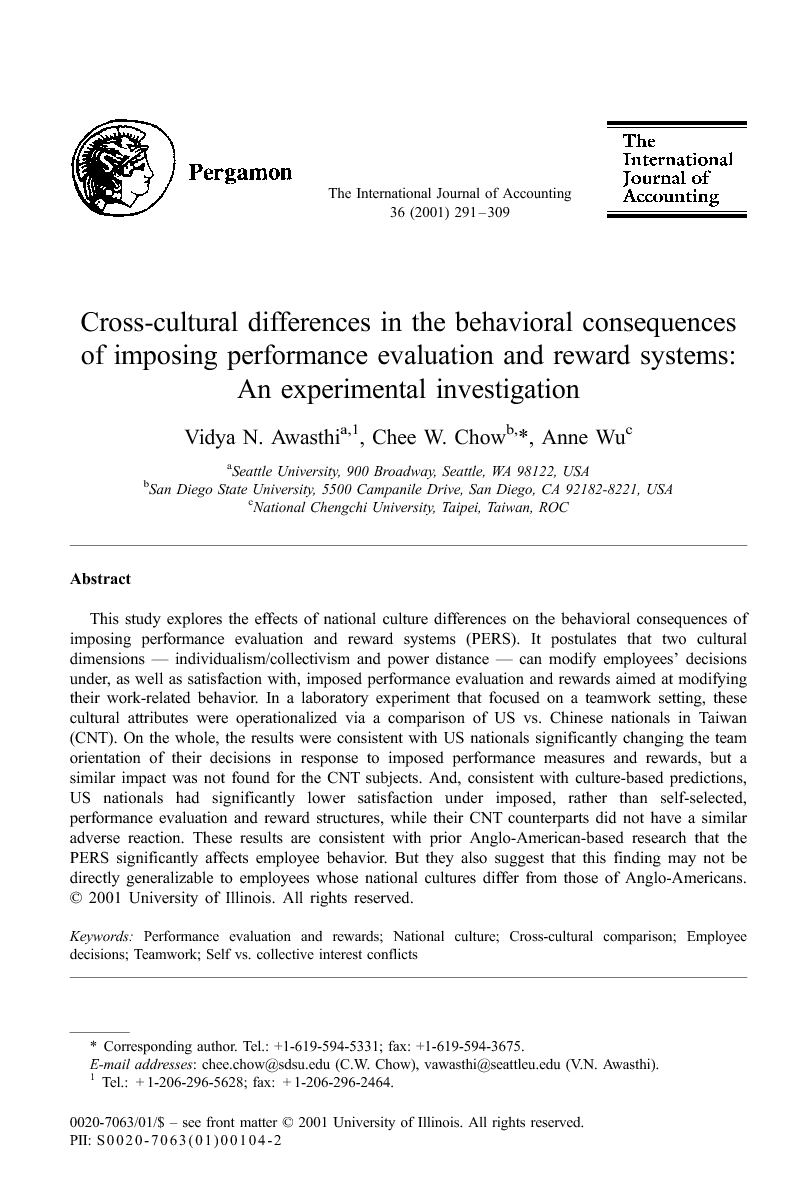 This study explores the effects of national culture differences on the behavioral consequences of imposing performance evaluation and reward systems (PERS). It postulates that two cultural dimensions — individualism/collectivism and power distance — can modify employees' decisions under, as well as satisfaction with, imposed performance evaluation and rewards aimed at modifying their work-related behavior. In a laboratory experiment that focused on a teamwork setting, these cultural attributes were operationalized via a comparison of US vs. Chinese nationals in Taiwan (CNT). On the whole, the results were consistent with US nationals significantly changing the team orientation of their decisions in response to imposed performance measures and rewards, but a similar impact was not found for the CNT subjects. And, consistent with culture-based predictions, US nationals had significantly lower satisfaction under imposed, rather than self-selected, performance evaluation and reward structures, while their CNT counterparts did not have a similar adverse reaction. These results are consistent with prior Anglo-American-based research that the PERS significantly affects employee behavior. But they also suggest that this finding may not be directly generalizable to employees whose national cultures differ from those of Anglo-Americans.

A central concern of organizations is ensuring that employees' decisions and actions are aligned with their best interests Merchant, 1985 and Merchant, 1989. A large body of research, primarily conducted in Anglo-American contexts, has shown that the performance evaluation and reward system (PERS) can significantly influence employee behavior Young & Lewis, 1995 and Young & Selto, 1993. This finding is taken to imply by both theorists and practitioners that organizations can use the PERS to ensure or increase the congruence between employee behavior and their own objectives Merchant, 1989 and Merchant, 1998. Yet a question that arises in the current era of global markets is whether this implication will hold across national boundaries. A growing body of research has consistently observed that national culture affects employees' work behavior (see Erez & Earley, 1993, Harrison & McKinnon, 1999, Hofstede, 1991 and Trompenaars & Hampden-Turner, 1998). More specifically, it has been observed that similar controls have different effects on the work behavior of people from different cultural backgrounds Birnberg & Snodgrass, 1988, Chow et al., 1996, Chow et al., 1991, Daley et al., 1985, Harrison, 1992 and Harrison, 1993. The potential implication of these findings is that the effectiveness and effects of PERS may differ across nations, with attendant implications for global firms' design of management systems and processes. The objective of this study is to explore the effects of national culture differences on the behavioral consequences of PERS. In a laboratory experiment involving a teamwork setting, national culture dimensions hypothesized to be relevant to this phenomenon were operationalized via a comparison of US vs. Chinese nationals in Taiwan (CNT). We found that among CNT subjects, imposing PERS, which differs from individuals' self-selected ones, only minimally affected the team vs. individual orientation of their decisions. In contrast, and consistent with prior Anglo-American-based studies on the effects of compensation contracts, there generally was a significant effect on US subjects' decisions. And, as expected based on the cultural dimensions of individualism and power distance, US nationals who worked under imposed performance-based pay structures were significantly less satisfied than their compatriots working under pay structures that they had self-selected. Also consistent with culture-based predictions, a similar difference in satisfaction was not found among the CNT subjects. These results caution against a direct extrapolation of research results and practices relating to PERS across nations with significantly different cultures. They also may imply that the effect of PERS on employee behavior and reactions may be less powerful than is generally conceived. The remainder of this paper is organized as follows. Section 2 reviews related prior literature on national culture, teamwork, PERS, and job satisfaction. Then we describe the empirical method, analysis, and results for the experiment. Section 4 discusses the limitations of this study and offers suggestions for future research.

In the current era of global economic exchange, it is important to acknowledge that people of different national origins can have different work-related cultures. These differences may facilitate or impede the adoption of management practices that have worked effectively in other national settings. This study has investigated the behavioral effects of imposing performance-based pay structures in a teamwork setting. It postulated that the effects of such imposition on employees' decisions and satisfaction would depend on two work-related cultural values — individualism and power distance. Subjects from the US represented a high individualism–low power distance culture, while CNT represented a low individualism–high power distance culture. The findings indicated that imposing a more team-based pay structure on the CNT subjects did not induce behavior that was more in favor of collective interests, while imposing a more individual-based pay structure on the US subjects did tend to shift behavior away from maximizing the collective interest. In other words, imposing a PERS was effective in shifting behavior away from the collective interest, but not in the opposite, and presumably desired, direction. However, it is important to note two caveats relating to this finding. First, because the US and CNT subjects had systematically different distributions of self-selected pay structures, the experiment was restricted to shifting the US and Chinese subjects in different directions away from these structures (towards more individual-based for the former and towards more team-based for the latter). The results on the subjects' decisions may have been, at least in part, driven by these different directional shifts.12 Since the data and sample sizes in this study did not permit isolating the potential confounding effects of this factor, future studies — especially ones with much larger sample sizes — are needed to resolve this issue. The second caveat relates to the choice of parameter values. In the experiment, the size of the self vs. collective interests conflict, as translated into pay, was relatively small. Different results might have been found if the divergence between the two were larger. In addition to impacts on decisions, this study also found that US nationals working under imposed pay structures were significantly less satisfied than their compatriots working under self-selected structures. Again, and consistent with culture-based expectations, their Chinese counterparts from Taiwan did not exhibit similarly significant differences in satisfaction. Taken as a whole, this study's findings can provide useful insights for the design of PERS across national boundaries. For example, they indicate that among US nationals — representatives of an individualistic national culture — imposing a PERS can significantly affect employees' behavior, though this effect may have to be traded off against decreases in employee satisfaction. The thrust of these findings would seem to accord with the focus on PERS in the primarily Anglo-American theories and practices. But for CNT — representing a more collective national culture — imposed PERS was more readily acquiesced to, though there also was less impact on employee behavior. Since these are potentially significant implications, it would be important to test the reproducibility, robustness, and boundaries of this study's findings. Below, we discuss four limitations of this study as the basis for offering some suggested directions for future research. First, the laboratory experiment in this study has assumed a linear type of interdependency where one team member's decisions affect only downstream operations, and both individual team members' personal performance and their effects on the team are known with certainty. Many cases of teamwork have more complex interdependencies where effects are recursive and uncertain, with synergies among team members that may only be measured with error. How alternate modes of performance evaluation and rewards affect employee behavior in such more complex team-based work settings is worthy of study. Second, this study has used a one-period experiment, even though it did make explicit the multiperiod nature of the team relationship and task. In an ongoing work relationship, factors such as social pressure, mutual monitoring, and the potential for future retaliation/cooperation may affect each team member's decisions and actions. Expanding the scope of investigation to include these other control and motivational mechanisms in a multiperiod setting would be worthwhile. Third, this study has used only one performance measure for each team member. Increasingly, firms are moving towards the use of multiple performance measures, including both financial and nonfinancial yardsticks. How the use of such combinations (e.g., the “balanced scorecard”) affects individual employees' ability to undertake self-interested actions is worthy of investigation. Finally, new management practices, such as teamwork, often are implemented in tandem with other methods (e.g., total quality management, just-in-time, employee empowerment). These management packages may affect the nature of the individual vs. collective interest conflict, and at the same time involve multiple cultural values (e.g., power distance in the case of employee empowerment). Concurrent with performance evaluation and rewards, organizations also can use mechanisms like recruitment, selection, indoctrination, training, mentoring, and career ladders, to influence employees' behavior and acceptance of their systems Chatman, 1989, Pascale, 1985 and Van Maanen & Schein, 1979. It would be desirable, though admittedly also challenging, to extend empirical testing to these more complex settings.