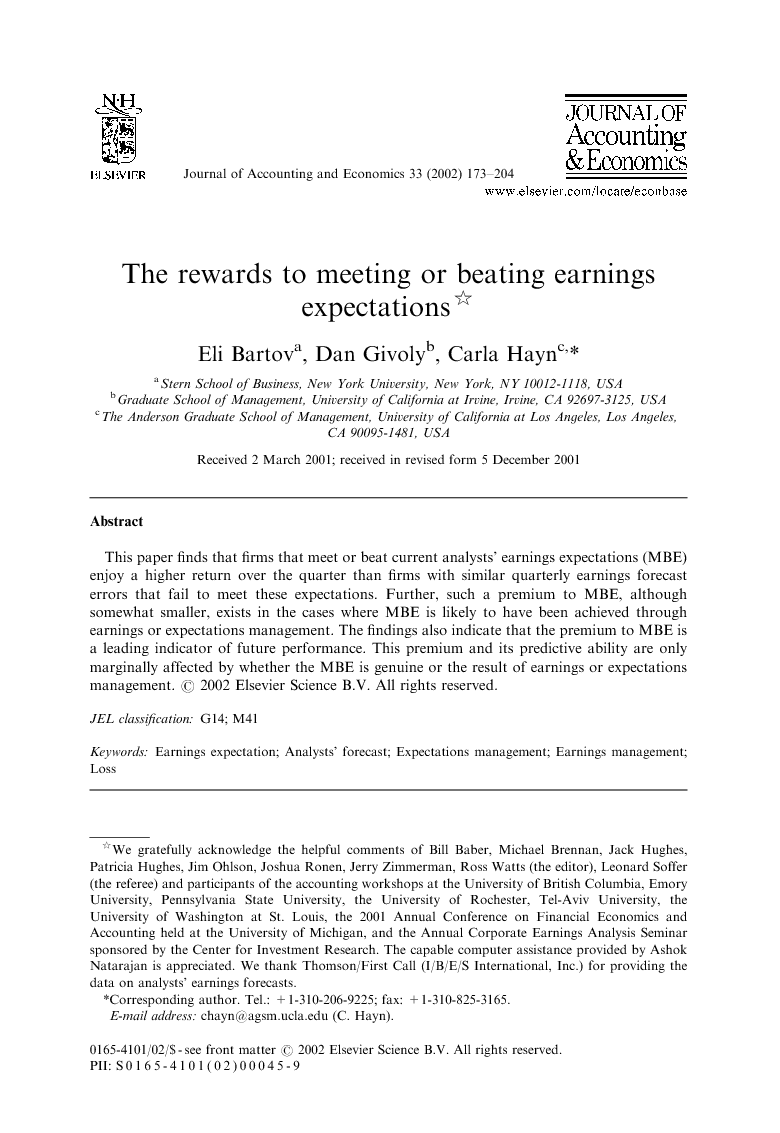 This paper finds that firms that meet or beat current analysts’ earnings expectations (MBE) enjoy a higher return over the quarter than firms with similar quarterly earnings forecast errors that fail to meet these expectations. Further, such a premium to MBE, although somewhat smaller, exists in the cases where MBE is likely to have been achieved through earnings or expectations management. The findings also indicate that the premium to MBE is a leading indicator of future performance. This premium and its predictive ability are only marginally affected by whether the MBE is genuine or the result of earnings or expectations management.

The paper examines the recent phenomenon of the “expectation game” whereby companies and investors focus on the degree to which reported earnings meet or beat analysts’ estimates. Anecdotal and empirical evidence, including findings provided by this paper, suggest that firms have become more successful in MBE and that this success is achieved in part by managing expectations. The evidence further shows that, after controlling for the absolute earnings performance, firms that manage to meet or beat their earnings expectations, even at the expense of an earlier dampening of those expectations, enjoy a higher return than their peers that fail to do so. While investors appear to apply some discount to MBE cases that are likely to result from expectations or earnings management, the discount is small and not significant economically. The finding of a premium to MBE, while explaining firms’ incentive to MBE, raises questions about investor rationality. However, the reward to MBE may be justified on economic grounds since earnings surprises appear to be a reliable predictor of the firms’ future performance. After controlling for the contemporaneous earnings performance, firms whose quarterly earnings releases constitute a favorable surprise show, in subsequent years, a higher growth in sales and earnings and a higher ROA and ROE than firms with the same earnings performance but with unfavorable earnings surprises. Like the premium to MBE, the predictive ability of MBE with respect to future firm performance depends only marginally on whether the MBE is genuine or whether it is produced through earnings or expectations management. The paper's findings leave some unanswered questions, the first of which is why analysts do not correct their forecasts for what appears to be a systematic downward bias in their late-in-the-period forecasts. Or, to put it in more concrete terms, how could analysts continue to underestimate Microsoft's quarterly earnings 41 times in a row? Examination of the characteristics of “habitual beaters” of earnings forecasts may shed light on this question. Another question that merits further examination is why MBE appears to have predictive ability with respect to firms’ future performance.