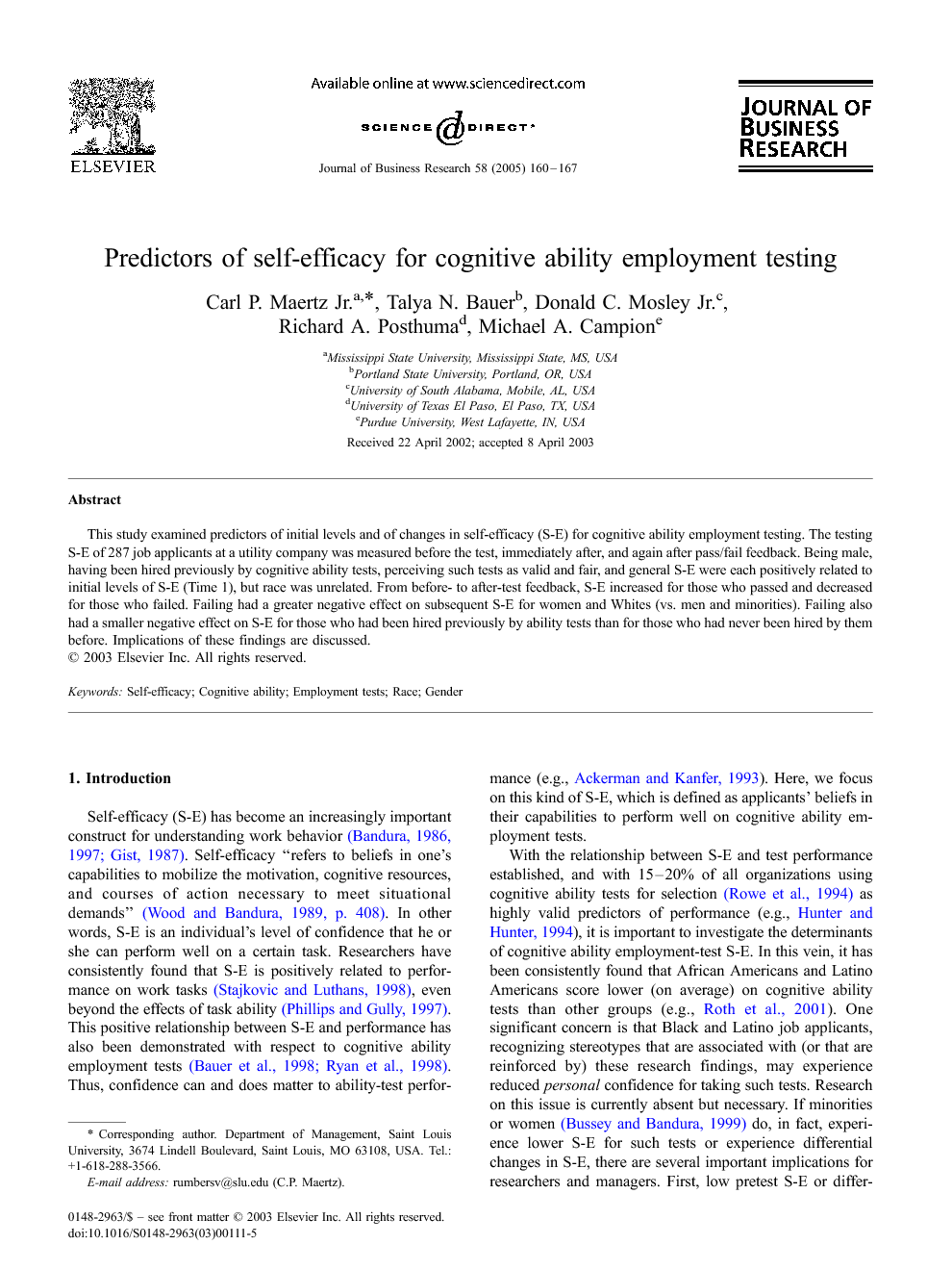 This study examined predictors of initial levels and of changes in self-efficacy (S-E) for cognitive ability employment testing. The testing S-E of 287 job applicants at a utility company was measured before the test, immediately after, and again after pass/fail feedback. Being male, having been hired previously by cognitive ability tests, perceiving such tests as valid and fair, and general S-E were each positively related to initial levels of S-E (Time 1), but race was unrelated. From before- to after-test feedback, S-E increased for those who passed and decreased for those who failed. Failing had a greater negative effect on subsequent S-E for women and Whites (vs. men and minorities). Failing also had a smaller negative effect on S-E for those who had been hired previously by ability tests than for those who had never been hired by them before. Implications of these findings are discussed.

Self-efficacy (S-E) has become an increasingly important construct for understanding work behavior Bandura, 1986, Bandura, 1997 and Gist, 1987. Self-efficacy “refers to beliefs in one's capabilities to mobilize the motivation, cognitive resources, and courses of action necessary to meet situational demands” (Wood and Bandura, 1989, p. 408). In other words, S-E is an individual's level of confidence that he or she can perform well on a certain task. Researchers have consistently found that S-E is positively related to performance on work tasks (Stajkovic and Luthans, 1998), even beyond the effects of task ability (Phillips and Gully, 1997). This positive relationship between S-E and performance has also been demonstrated with respect to cognitive ability employment tests Bauer et al., 1998 and Ryan et al., 1998. Thus, confidence can and does matter to ability-test performance (e.g., Ackerman and Kanfer, 1993). Here, we focus on this kind of S-E, which is defined as applicants' beliefs in their capabilities to perform well on cognitive ability employment tests. With the relationship between S-E and test performance established, and with 15–20% of all organizations using cognitive ability tests for selection (Rowe et al., 1994) as highly valid predictors of performance (e.g., Hunter and Hunter, 1994), it is important to investigate the determinants of cognitive ability employment-test S-E. In this vein, it has been consistently found that African Americans and Latino Americans score lower (on average) on cognitive ability tests than other groups (e.g., Roth et al., 2001). One significant concern is that Black and Latino job applicants, recognizing stereotypes that are associated with (or that are reinforced by) these research findings, may experience reduced personal confidence for taking such tests. Research on this issue is currently absent but necessary. If minorities or women (Bussey and Bandura, 1999) do, in fact, experience lower S-E for such tests or experience differential changes in S-E, there are several important implications for researchers and managers. First, low pretest S-E or differential drops in S-E may contribute to a negative cycle of low performance and reduced confidence for minorities or women known as efficacy-performance spirals (e.g., Lindsley et al., 1995 and Shea and Howell, 2000). This could cause women and minorities to feel increasingly disadvantaged at organizations using cognitive ability tests, possibly prompting charges of discrimination. Second, low S-E may discourage minorities or women from applying for jobs where cognitive ability tests are used (e.g., Schmit and Ryan, 1997), inhibiting affirmative recruiting efforts. Third, to ensure fairness, such potential problems may need to be addressed through prehire management interventions to improve S-E (e.g., Gist, 1987). Finally, if minorities are shown to have lower S-E for cognitive ability tests, researchers should investigate whether this may actually contribute to or account for lower mean test scores for some minority groups (Sanchez et al., 2000). These social justice and practical concerns for hiring women and minorities demand that researchers directly examine race and gender effects on cognitive ability test S-E. This is one purpose of the current study along with examining other theoretically relevant potential predictors. Specifically, we use a model of S-E development (i.e., Gist and Mitchell, 1992) to hypothesize effects for race, gender, past experiences (e.g., Bandura, 1997), and other relevant predictors on (1) initial levels of S-E prior to the employment test and (2) changes in S-E following (pass/fail) feedback on the cognitive ability test.

There are several limitations to this study. First, there may have been some inflation of change effects for gender and pass/fail performance because of the directional ANCOVA bias, but normally preferred difference scores were inappropriate because of some skewness in our data (Cribbie and Jamieson, 2000). ANCOVA bias probably did not greatly affect results because the pattern and significance level of all the hypothesized effects were the same when Time 2 S-E was not controlled. Second, over 90% of our sample were not college graduates and were applying for a relatively low-skill job. Caution must be exercised in generalizing findings to any highly educated professional or managerial samples. Third, our measure of past test experience was categorical: no experience/hire/no hire, not capturing the frequency or timing of experiences. This may have attenuated effects of this variable. Discussion among applicants between survey administrations may have affected S-E changes and threatened the internal validity of some findings. We could not establish measurement invariance across all predictor groups due to small subsamples and the related lack of power. Finally, there may be other determinants of S-E not measured or controlled in this study. However, this criticism is not as serious as it might have been because we chose to develop and test hypotheses, rather than develop a comprehensive causal model. Hopefully, our findings will provide useful inputs to and inspire such future causal modeling efforts on employment-testing S-E. Finally, we make several other notable contributions with this study by presenting first evidence that there may be no direct race effects on cognitive ability testing S-E and by presenting first evidence that Whites and women appear to lower their S-E more than other race groups after employment-test failure