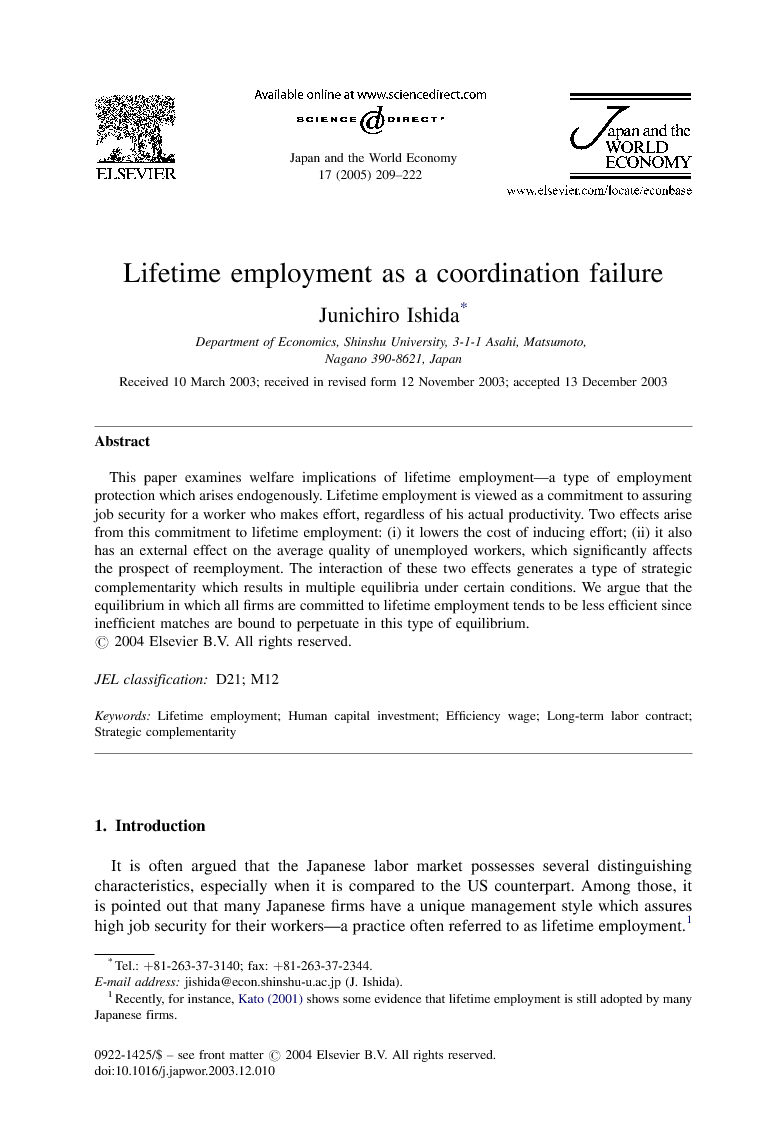 This paper examines welfare implications of lifetime employment—a type of employment protection which arises endogenously. Lifetime employment is viewed as a commitment to assuring job security for a worker who makes effort, regardless of his actual productivity. Two effects arise from this commitment to lifetime employment: (i) it lowers the cost of inducing effort; (ii) it also has an external effect on the average quality of unemployed workers, which significantly affects the prospect of reemployment. The interaction of these two effects generates a type of strategic complementarity which results in multiple equilibria under certain conditions. We argue that the equilibrium in which all firms are committed to lifetime employment tends to be less efficient since inefficient matches are bound to perpetuate in this type of equilibrium.

It is often argued that the Japanese labor market possesses several distinguishing characteristics, especially when it is compared to the US counterpart. Among those, it is pointed out that many Japanese firms have a unique management style which assures high job security for their workers—a practice often referred to as lifetime employment.1 There is a strong belief that this employment practice contributes significantly to the low job turnover rate of the Japanese economy.2 It is a widely accepted view that long-term contracts in general, and lifetime employment in particular, serve as an incentive scheme to induce costly effort or investment from workers.3 This paper extends a classic argument by Becker (1964) and Hashimoto (1979) who maintain that firms may use long-term contracts to encourage and reward the acquisition of firm-specific human capital.4 We consider a situation in which each worker can accumulate human capital and become more productive through training, but the return to training is a random variable. Within this setup, we view lifetime employment as a commitment to assuring job security for a worker who attains a necessary level of training, no matter how unproductive he turns out to be due to the random nature of training. In other words, when a firm is committed to lifetime employment, workers are evaluated based strictly on effort rather than outcome. We then argue that lifetime employment, defined as above, can be supported as an equilibrium outcome even when workers are risk neutral. Two effects arise from a commitment to lifetime employment. First, the return to exerting effort necessarily increases under lifetime employment. As a result, firms can lower the cost of inducing effort. Second, a commitment to lifetime employment also has an external effect on the average quality of unemployed workers, which significantly affects the prospect of reemployment. As more firms are committed to lifetime employment, the average quality of unemployed workers deteriorates and this perception seriously limits the prospect of reemployment. A critical point worth emphasizing is that the magnitude of the first effect depends on the value of the outside option, namely, the prospect of reemployment. We show that the dependence of the first effect on the second generates a type of strategic complementarity where the value of lifetime employment is increasing in the number of firms committed to lifetime employment. Under certain conditions, this complementarity is strong enough to induce the emergence of multiple equilibria. We argue that this accounts for the differences in personnel strategies between US and Japanese firms. Using this framework, the main purpose of the paper is to examine welfare implications of lifetime employment. The argument above indicates that whether a firm should commit itself to lifetime employment depends critically on the employment strategy of other firms: it is always beneficial for a firm to mimic the behavior of others. The entire structure of the model is therefore reduced to a simple coordination game in the presence of multiple equilibria. We show that the equilibrium in which all firms are committed to lifetime employment tends to be less efficient since inefficient matches are bound to perpetuate in this equilibrium. The paper is close in spirit to Okuno-Fujiwara (1987) who argues that long-term labor contracts can be sustained as an equilibrium outcome based on the belief that dismissed workers will not find new jobs. The difference is that, in the present analysis, we endogenize this belief formation by explicitly modeling the external labor market. The difference also results in a drastic change in welfare implications: we argue that lifetime employment tends to be welfare-reducing while Okuno-Fujiwara argues that it is welfare-improving. The paper is also related to Prendergast (1992) in that it relates internal managerial policies to conditions in the external labor market. Prendergast argues that Japanese firms are able to delay promotions because workers have limited reemployment opportunities. In contrast, we argue that Japanese firms are able to sustain lifetime employment for the same reason. To this end, the paper proceeds as follows. Section 2 briefly outlines the model, and Section 3 analyzes the model. Section 4 characterizes the equilibria and establishes the existence of multiple equilibria also examines welfare implications of the model. Section 5 offers some concluding remarks.