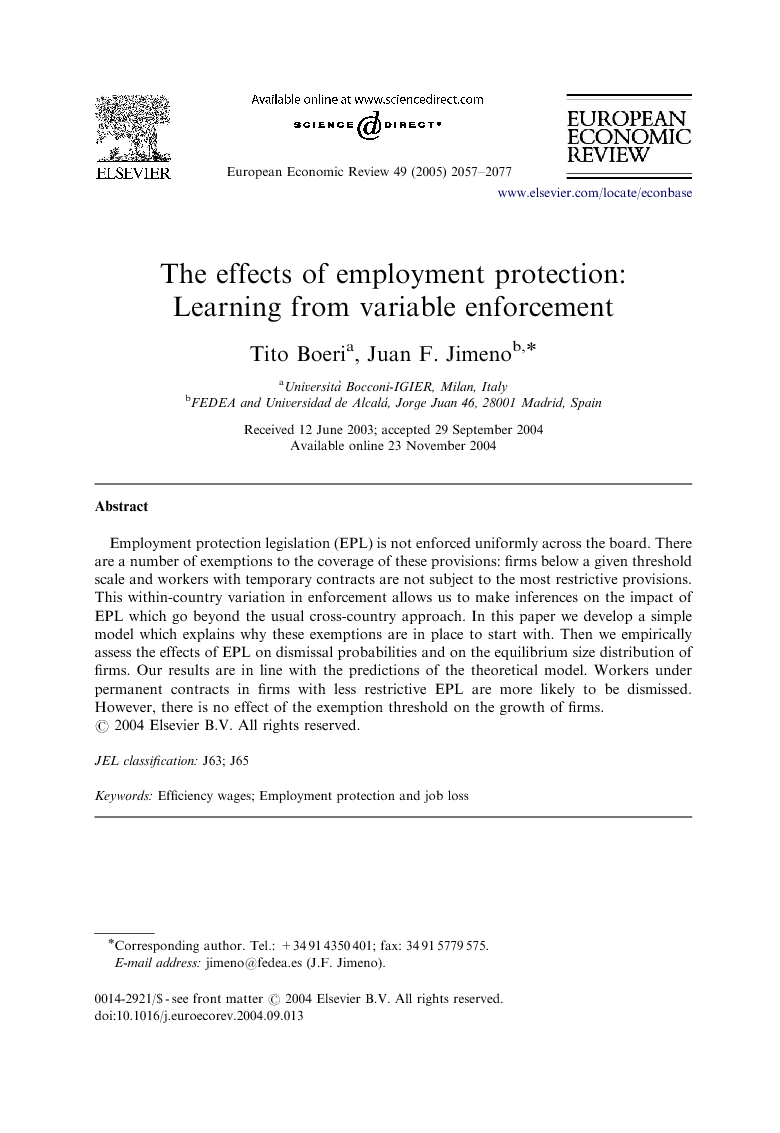 Employment protection legislation (EPL) is not enforced uniformly across the board. There are a number of exemptions to the coverage of these provisions: firms below a given threshold scale and workers with temporary contracts are not subject to the most restrictive provisions. This within-country variation in enforcement allows us to make inferences on the impact of EPL which go beyond the usual cross-country approach. In this paper we develop a simple model which explains why these exemptions are in place to start with. Then we empirically assess the effects of EPL on dismissal probabilities and on the equilibrium size distribution of firms. Our results are in line with the predictions of the theoretical model. Workers under permanent contracts in firms with less restrictive EPL are more likely to be dismissed. However, there is no effect of the exemption threshold on the growth of firms.

The purpose of this paper is threefold (i) to extend standard models of employment protection legislation (EPL) allowing for disciplinary as well as economic dismissals, (ii) to explain why EPL is typically not enforced in the case of small units and (iii) to provide new evidence on the relationship between strictness of EPL and job loss as well as EPL thresholds and growth of firms. Unlike previous studies drawing on cross-country variation, in this paper inferences are made by exploiting the within-country variation in the enforcement of EPL. Regulations on dismissals typically allow for a threshold scale (generally defined in terms of the number of employees) below which the most restrictive EPL provisions (e.g., the compulsory reintegration in case of unjustified dismissal) are not enforced, the legal procedures for firings are eased, or severance payments are diminished. In this paper we develop a simple theoretical model to illustrate the rationale for these exemptions, and use this discontinuity in regulations (as well as the divide between fixed-term and permanent contracts) to infer the effects of EPL within a double-difference approach. The vast theoretical literature on EPL does not take into account that legal restrictions to dismissals affect both economic and disciplinary dismissals. In an efficiency wage environment à la Shapiro and Stiglitz (1984), this observation is very important because the likelihood of disciplinary layoffs deters workers from shirking, whilst the probability of economic layoffs affects positively the efficiency wage the employer has to pay in order to induce workers not to shirk. This is because a higher risk of being dismissed per any given level of effort reduces the penalty associated with the fact of being caught shirking. Hence, insofar as EPL negatively affects disciplinary layoffs, it increases the efficiency wage; when EPL instead acts mainly on economic layoffs, it reduces the efficiency wage. As monitoring effectiveness is decreasing in firms’ size, this simple intuition explains the presence of threshold plant levels below which EPL is only mildly enforced. It would just make it too costly for small units to operate. The vast empirical literature on EPL (surveyed in OECD, 1999 and OECD, 2004) typically uses a cross-country approach in assessing the effects of EPL on labour markets. However, cross-country (and often pair-wise) correlations of indicators of the strictness of EPL with measures of labour market performance cannot disentangle the effects of EPL per se from the effects of EPL when interacted with other institutions. Previous work—i.e., Bertola and Rogerson (1997), and Layard and Nickell (1999)—suggests that the effects of EPL on labour market performance interact with other institutional features, such as wage compression induced by collective bargaining, unemployment benefits and statutory minimum wages or the effects of early retirement and “soft” landing schemes. In a cross-country and multivariate regression framework it is not possible to take into account all of the relevant institutional interactions, owing to the few degrees of freedom available (there are no time-series for many institutions), and measurement problems, which are particularly serious having mainly to do with ordinal measures (country rankings) of institutions, developed out of qualitative information on regulations. In this paper—as in Garibaldi et al. (2004) and Kugler and Pica (2003)—we exploit within-country variation in the enforcement of EPL. This is a clear improvement with respect to the above literature insofar as the different institutions interacting with EPL are invariant across observations or, at least, do not have the same cross-sectional variation as EPL. Firstly, we model the exemptions and EPL rules, and then develop our empirical framework. The model sheds light on the rationale and political support to these exemptions. It extends the standard models of adjustment costs for labour used by most of the EPL literature, allowing for imperfect monitoring of workers’ effort. To keep things simple we rule out adverse selection and assume that workers are homogeneous, so that in equilibrium there is no shirking. Our main theoretical results can be summarised as follows. From a theoretical perspective, EPL has ambiguous effects on wages: on the one hand, employment protection reduces the likelihood of exogenous (economic) dismissals thereby reducing the wage levels which can deter shirking; on the other hand, EPL also makes it difficult to dismiss undisciplined workers, and this reduces the credibility of the threat of dismissal for those shirking, forcing employers to pay higher wages in order to discourage opportunistic behaviour by their workers. The first effect tends to dominate in large units, whilst the wage enhancing effect dominates in small organisations that can monitor workers’ performance better. Thus, exempting small firms from EPL reduces the negative employment effects of employment protection. From a political economy perspective, EPL can only be accepted in large units, as in small firms EPL stabilises employment at levels which can be lower than in a flexible regime under the bad state of the world. Empirically, we show that the Italian EPL threshold scale does not significantly affect employment growth of firms while it affects the distribution of dismissal rates by plant size. More precisely, exemptions from EPL induce a discontinuity in the relation between size of firms and likelihood of being dismissed, but not in the year-to-year probability that units increase their work-force. Our results are obtained by taking a double-difference approach. We compare the estimated dismissal probabilities along two dimensions: firstly the coverage of EPL (workers in units with less than 15 employees are not covered by EPL); secondly, the fact of having a permanent or a temporary contract (as workers under temporary contracts are not covered by EPL, independently of firm size). In estimating the effects of EPL on employment growth we once again use the 15-employees threshold as well as the fact that in 1990 some regulations were tightened exclusively for establishments with less than 15 employees. The plan is as follows. Section 2 reviews the literature. Section 3 develops a simple model rationalising exemptions from EPL of small units. Section 4 provides details of exemptions from EPL in Italy, describes the data and displays our estimates. Section 5 concludes.

There are a few institutional features of the labour market which have been as thoroughly investigated as employment protection. Despite the attention devoted by applied economists to this issue, we still know very little about the impact of these regulations on the employment adjustment of firms. Above all, it is difficult to isolate the effects of EPL from those of other institutional features of the labour market. This is because most of the work has been carried out in terms of cross-country and pair-wise correlations between EPL and various measures of labour market performance. In this paper we take a different approach in that we focus on within-country variation in the enforcement of EPL. In particular, we draw inferences from the exemption clauses which exonerate small units from EPL. To this end, we develop a theoretical model which extends standard models of EPL by disentangling disciplinary from economic layoffs and provides a political economy rationale for these exemption rules. Our empirical results are in line with the predictions of the model: the small firm (15 employees) threshold does matter in conditioning layoff and hiring probabilities. It also mildly increases firms’ persistence, i.e., the probability that a firm does not change the number of employees from one year to the next. But there is no evidence of any significant discontinuity in the size distribution of firms in correspondence with these thresholds. In future work we plan to consider other exemption rules in the enforcement of labour laws, notably those related to regulations on group layoffs.