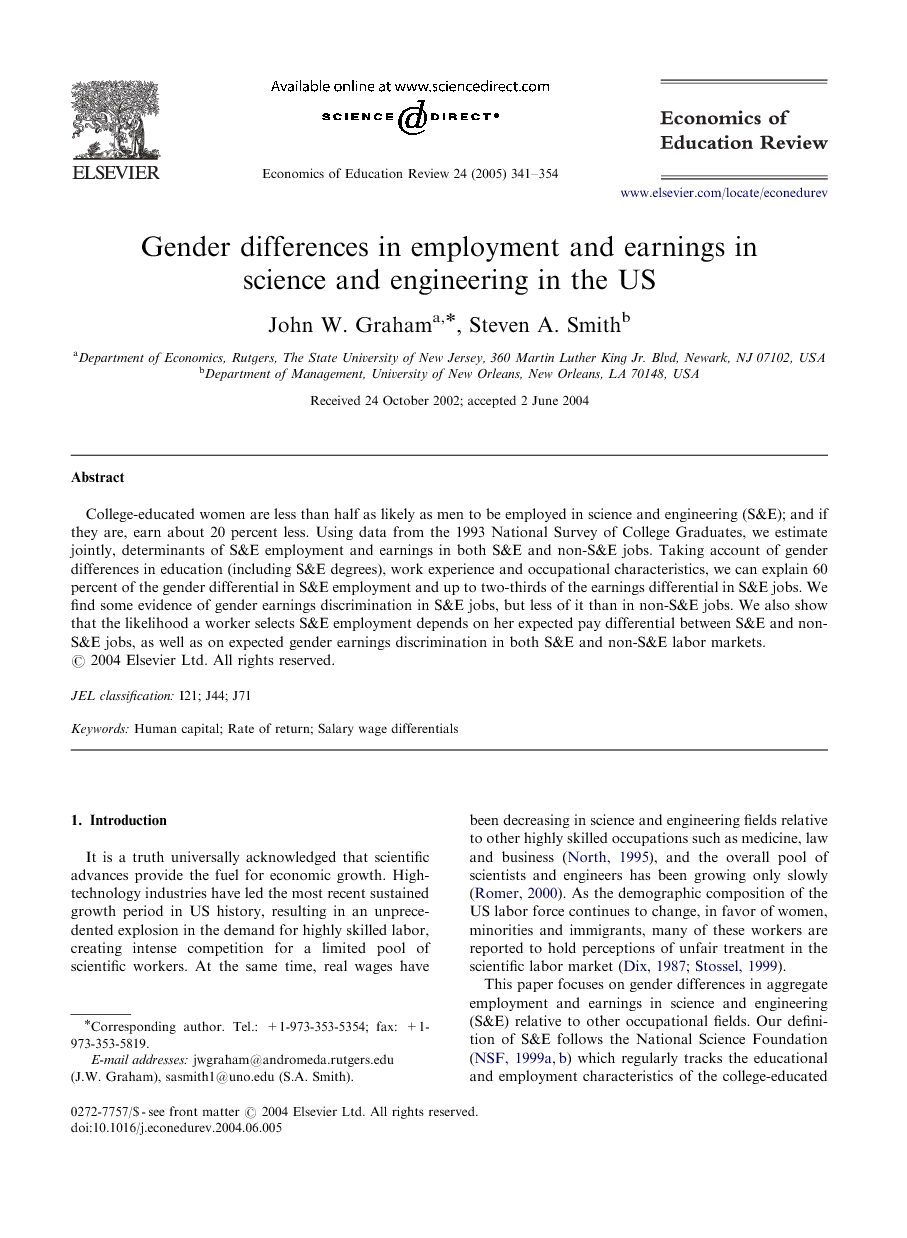 College-educated women are less than half as likely as men to be employed in science and engineering (S&E); and if they are, earn about 20 percent less. Using data from the 1993 National Survey of College Graduates, we estimate jointly, determinants of S&E employment and earnings in both S&E and non-S&E jobs. Taking account of gender differences in education (including S&E degrees), work experience and occupational characteristics, we can explain 60 percent of the gender differential in S&E employment and up to two-thirds of the earnings differential in S&E jobs. We find some evidence of gender earnings discrimination in S&E jobs, but less of it than in non-S&E jobs. We also show that the likelihood a worker selects S&E employment depends on her expected pay differential between S&E and non-S&E jobs, as well as on expected gender earnings discrimination in both S&E and non-S&E labor markets.

It is a truth universally acknowledged that scientific advances provide the fuel for economic growth. High-technology industries have led the most recent sustained growth period in US history, resulting in an unprecedented explosion in the demand for highly skilled labor, creating intense competition for a limited pool of scientific workers. At the same time, real wages have been decreasing in science and engineering fields relative to other highly skilled occupations such as medicine, law and business (North, 1995), and the overall pool of scientists and engineers has been growing only slowly (Romer, 2000). As the demographic composition of the US labor force continues to change, in favor of women, minorities and immigrants, many of these workers are reported to hold perceptions of unfair treatment in the scientific labor market (Dix, 1987; Stossel, 1999). This paper focuses on gender differences in aggregate employment and earnings in science and engineering (S&E) relative to other occupational fields. Our definition of S&E follows the National Science Foundation (National Science Foundation, & Division of Science Resources Studies (1999a) and National Science Foundation, & Division of Science Resources Studies (1999b)) which regularly tracks the educational and employment characteristics of the college-educated workforce involved in occupations that have the greatest potential to generate research and development payoffs. There were roughly 3.5 million college-educated individuals in the US in 1999 working in one of five broadly defined S&E fields—computer/math, life sciences, physical sciences, social sciences and engineering (NSF, 2003). Women were just 24 percent of all S&E workers (even though they are 46 percent of all workers) and earned on average 22 percent less than men. The main goals of this paper are to explain the causes of these gender differences in S&E employment and earnings and to assess the relationship between S&E employment and earnings. Our focus on S&E occupations as a whole rather than specific S&E jobs is consistent with a long tradition of economic analysis of the sources of gender earnings discrimination as exemplified in a recent article by O’Neill (2003). Economist Paula Stephan (1996) has observed one reason science commands our attention is that the S&E labor market offers fertile ground for testing the human capital model which relates earnings to education, training and experience (see Becker, 1964; Mincer, 1974, among many others). To the extent S&E jobs value measurable skills and knowledge over less tangible traits such as personality or appearance (which may be more important in some non-S&E jobs such as management, sales and service), then a small set of human capital variables might be expected to capture a large portion of the variation in individual earnings and may also account for a significant portion of the gender pay gap. By contrast, sociologist Laurie Morgan (1998) offers an alternative view of S&E which emphasizes the importance of “old-boy” networks and the “glass ceiling.” She argues that since S&E jobs have been traditionally male-dominated, women may find themselves at a disadvantage in terms of entry, pay and promotion. This view suggests that factors other than human capital are likely to account for much of the gender differential in pay. In this paper, we combine these two schools of thought, arguing that a worker's decision whether or not to seek employment in an S&E occupation depends both on the earnings differential between S&E and non-S&E jobs and on perceptions of discrimination in the two fields. To model both pay and discrimination, we need unbiased estimates of what a worker could expect to earn in both S&E and non-S&E jobs. After reviewing our dataset and sketching a theory of occupational selection, we present maximum likelihood estimates of the determinants of selecting an S&E occupation and of earnings in S&E and non-S&E fields, by gender. We then offer quasi-structural equation estimates of how differences in earnings between S&E and non-S&E jobs and gender discrimination in the two fields affect the likelihood that a college-educated worker is employed in S&E.

Recognizing the ever-critical need for scientists and engineers, together with the continuing demographic shift in the college-educated labor force in favor of women and minorities, policy makers and others have voiced concern about current and future equity and efficiency in S&E labor markets. Women represent just slightly more than one-fifth of the total S&E workforce, and on average, earn about 20 percent less than men. The main goal of this paper has been to identify factors responsible for the disproportionate selection of women away from S&E and for gender inequality in pay. It is our thesis that S&E selection and pay are related and need to be analyzed simultaneously. We find that about 60 percent of the gender differential in the likelihood that a college-educated worker selects an S&E job can be explained, and all of it on the basis of gender differences in S&E educational backgrounds. Men are much more likely than women to have a degree in an S&E field, a factor which greatly increases their chances of selecting an S&E job. From a policy viewpoint, encouraging more women to major in science or engineering in college remains the single most important way to increase the representation of women in S&E occupations. But not all students who major in S&E fields go on to work in S&E jobs, and attrition away from S&E is greater among women than men. We offer evidence (on the basis of the correlation between the error terms in the selection and earning equations) that men with S&E degrees who unexpectedly select non-S&E jobs tend to do so for reasons of higher expected earnings while women do so reasons other than higher earnings. Future research needs to identify these reasons as a prelude to reducing the high rate of attrition of S&E-trained women away from S&E employment. We find that almost two-thirds of the gender pay gap in S&E occupations can be explained. Consistent with Paula Stephan's (1996) view of the S&E labor market as one in which monetary rewards depend largely upon measurable skills, the explained pay gap can be attributed to a standard set of demographic, human capital and occupation-related variables. We also find some support for Laurie Morgan's view on the gender differences in treatment, since one-third of the S&E pay gap remains unexplained. But, compared with S&E occupations, there appears to be even greater pay inequity in the non-S&E labor market: as much as 70 percent of the pay gap in non-S&E jobs remains unexplained. Finally, we showed that the likelihood of selecting an S&E occupation depends positively upon the expected earnings difference between S&E and non-S&E jobs as well as on expected gender earnings inequality (i.e., discrimination against women or favoritism of men) in both the S&E and non-S&E labor markets. For men and women, participation in S&E is negatively related to expected gender earnings inequality in S&E and positively related to expected inequality in the non-S&E labor market. No one would advocate increasing gender inequality in non-S&E jobs as a means to boosting S&E employment, but our findings do suggest two positive approaches to raising S&E employment in general and among women in particular. First, we need to increase S&E pay generally, perhaps through government subsidies or spending to boost the demand for and pay of S&E workers. Second, we need to target federal EEOC antidiscrimination enforcement and affirmative action policies toward reducing gender earnings discrimination in S&E jobs.