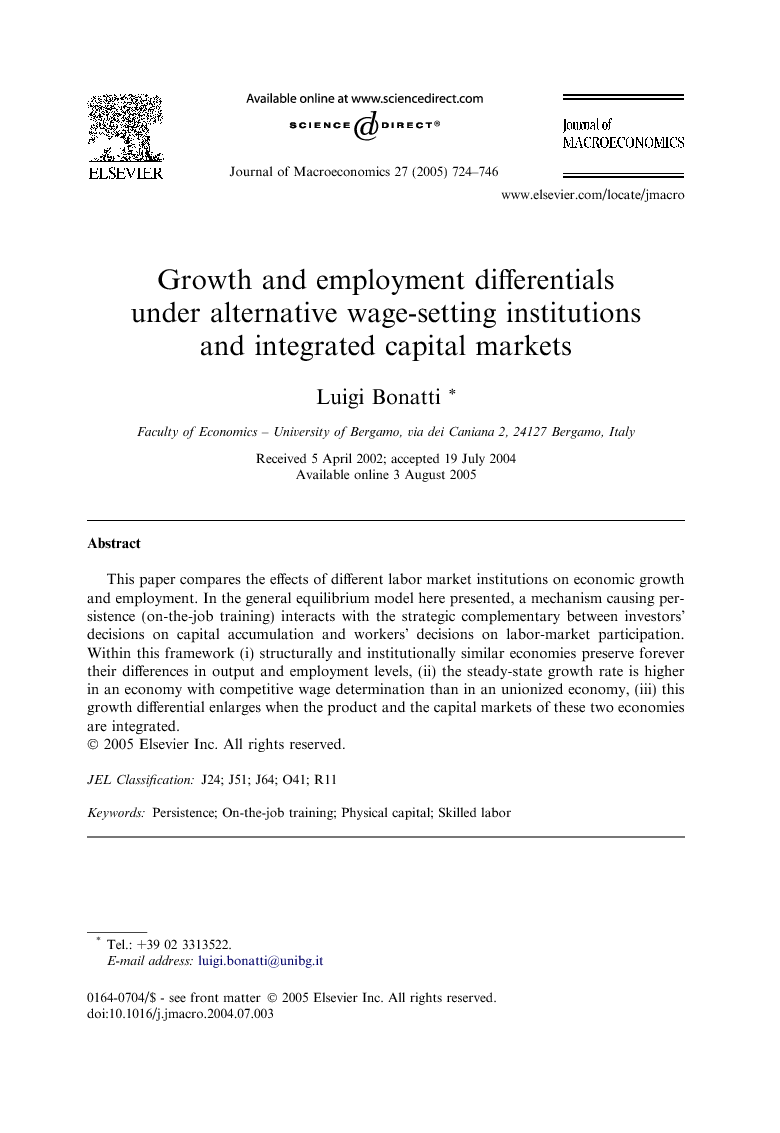 This paper compares the effects of different labor market institutions on economic growth and employment. In the general equilibrium model here presented, a mechanism causing persistence (on-the-job training) interacts with the strategic complementary between investors’ decisions on capital accumulation and workers’ decisions on labor-market participation. Within this framework (i) structurally and institutionally similar economies preserve forever their differences in output and employment levels, (ii) the steady-state growth rate is higher in an economy with competitive wage determination than in an unionized economy, (iii) this growth differential enlarges when the product and the capital markets of these two economies are integrated.

A basic fact emerging from the recent experience of OECD economies is that “countries with higher per capita growth rates have maintained or even increased employment over the 1990s, while employment has stagnated or even fallen in those experiencing a slowdown in GDP growth” (Bassanini et al., 2000, p. 31). In spite of the evidence that the different ability of countries to employ their labor forces has been correlated with the disparities in growth patterns across the OECD countries,1 the research program which combines unemployment theory and growth theory is still in its infancy. The value added of the general equilibrium dynamic model presented in this paper is the contribution that it makes to such program by conducting a unified treatment of two crucial issues raised in the debate on the diverging growth and employment performances of the advanced economies. First, the paper deals with the widespread notion that labor-market institutions more responsive to competitive forces—like those typical of the US—are conducive to better growth and employment performances than the institutional settings of many countries of Continental Europe,2 which are more concerned with protecting incumbent workers (the “insiders”). In regard to this issue, the specific contribution of the paper consists in showing how the modalities of wage determination may affect the process by which resources strategic for growth, i.e., physical capital and trained workforce, are accumulated, thereby influencing growth and employment patterns. Growth is modeled as a self-reinforcing process. Firms’ capital investment and job creation enable an increasing number of individuals to acquire skills whose availability attracts more investment and boosts the growth potential of the economy. In their turn, the jobs and career opportunities created by a fast-growing economy induce more individuals to participate in the labor market, thereby helping to ease the upward pressure on wages exerted by the increasing labor demand. In the absence of collective bargaining and institutional barriers to protect their jobs, incumbent workers have few opportunities to exploit the advantage that they enjoy with respect to outsiders because of their skills acquired on the job. As a result, a higher growth path can be sustainable when the wage-setting process is more responsive to external market forces, since in this case wage moderation and adequate profitability can be preserved even if the rates at which capital accumulates and employment grows are relatively high. These long-term effects of different labor-market institutions may help to capture that peculiar mix of slow capital growth, inadequate job creation and relatively high capital-to-(employed) labor ratio which characterized the main economies of the Euro area in the 1990s in contrast with the Anglo-Saxon countries. A second related issue concerns the way in which the labor market interacts with the capital market to generate growth. By determining endogenously both the cost of labor (the wage) and the cost of capital (the real interest rate), the model presented here is able to capture the important constraint on faster GDP and employment growth represented by the fact that when market participants anticipate an acceleration of growth, they experience a positive wealth effect that depresses their saving propensity. In a closed economy, this is likely to put on upward pressure on the cost of capital,3 thus restraining investment and slowing down growth. Therefore, in the light of the insufficiency of the US saving rate to finance the domestic investment boom of the late 1990s, the paper is able to formalize the role played by the increasing integration of the world capital market in relaxing this constraint and enlarging the growth differential between the US and Continental Europe. In fact, in a world economy consisting of national economies characterized by different institutional frameworks, a country whose institutions are more favorable to growth is better able to exploit its potentialities if it can attract resources from abroad by virtue of an integrated capital market. The paper is organized as follows: Section 2 discusses the relevant literature; Section 3 presents the basic model; Section 4 solves the model when the insiders’ unions have control over the wage-setting process; Section 5 solves the model when wages respond to competitive forces; Section 6 compares the balanced growth paths obtained in the previous two sections; Section 7 characterizes the equilibrium path when an area with union-determined wages and an area with market-determined wages coexist under perfect capital mobility; Section 8 concludes.

The main implications of the model presented in this paper are the following: (i) If the value of the workers’ alternative option does not change with the output level of the economy, structurally similar economies sharing the same modalities of wage determination but endowed with different stocks of physical and human capital display permanent differentials in the levels of output and employment. This implies that differentials in the levels of output and employment across structurally similar economies may become permanent even if wage determination is not controlled by the insiders but respond to competitive forces. (ii) In this case, the steady-state rate of growth is higher when wages are determined competitively rather than being controlled by the insiders. (iii) The positive permanent effect exerted on the growth rate by a favorable shift in labor-market institutions will be partially offset by a rising equilibrium cost of capital: a permanently higher growth rate is associated with a higher steady-state rate of interest. In the presence of an integrated world capital market, this constraint may be less binding, and the growth potential of an economy enjoying a competitive advantage due to the modalities of wage determination can be better exploited at the expenses of economies less able to attract investment because of their labor-market institutions.