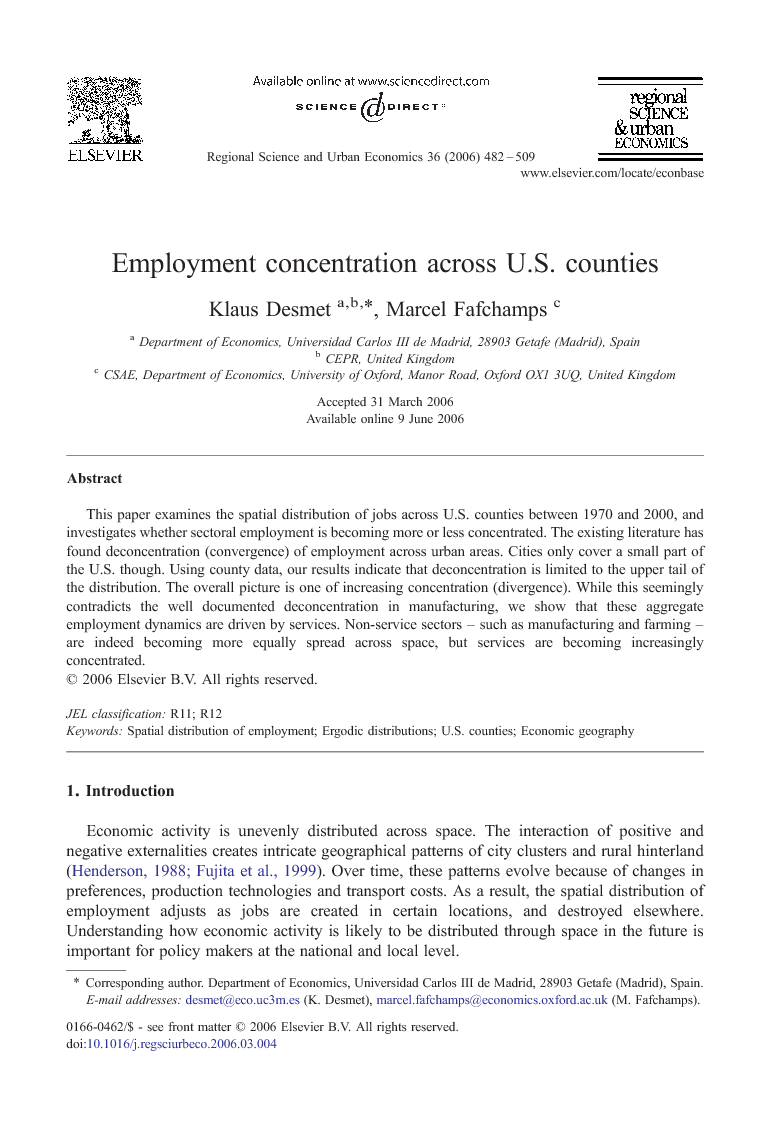 This paper examines the spatial distribution of jobs across U.S. counties between 1970 and 2000, and investigates whether sectoral employment is becoming more or less concentrated. The existing literature has found deconcentration (convergence) of employment across urban areas. Cities only cover a small part of the U.S. though. Using county data, our results indicate that deconcentration is limited to the upper tail of the distribution. The overall picture is one of increasing concentration (divergence). While this seemingly contradicts the well documented deconcentration in manufacturing, we show that these aggregate employment dynamics are driven by services. Non-service sectors – such as manufacturing and farming – are indeed becoming more equally spread across space, but services are becoming increasingly concentrated.

In this paper we examined how the distribution of employment across U.S. counties is likely to evolve if current concentration and deconcentration forces remain unchanged. To do so, we developed a methodology borrowing from the work of Quah and building upon the literature on β- and σ-convergence. We computed non-parametric β-convergence regressions, conditional and unconditional. Using non-parametric methods, we also computed detailed ergodic distributions for total employment and sectoral employment across U.S. counties. Our results suggest that employment is becoming increasingly concentrated across counties. Although very large metro counties may be losing jobs, the proportion of counties with modal employment is decreasing in favor of medium to high employment counties. More specifically, the 8% largest counties exhibit deconcentration; the remaining 82% exhibit concentration. This result is consistent with deconcentration across urban areas (Chatterjee and Carlino, 2001) and concentration across U.S. counties (Desmet and Fafchamps, 2005). It also confirms the results of Beeson and DeJong (2002) of population divergence across counties. Whether the overall picture is one of concentration or deconcentration is not entirely obvious. In terms of the number of counties, concentration holds the upper hand. However, in terms of the number of people, deconcentration dominates, since the 8% highest employment counties accounted for nearly two thirds of total employment in 1970. There are important differences across sectors. As in the rest of the literature, we find deconcentration in manufacturing. Deconcentration is also the norm in other non-service sectors. However, service activities are becoming more concentrated, in particular ‘retail’ trade, ‘finance, insurance and real estate’, and ‘other services’. Given the importance of these sectors, they drive the evolution of the spatial distribution of total employment. Limiting the focus of analysis to manufacturing is misleading. The U.S. is a service economy, and services are behaving very differently from the other sectors. Although we have limited our analysis to employment, our findings may shed light on the spatial dynamics of productivity and wages across the United States. Using county-level data, Ciccone and Hall (1996) conclude that doubling employment density leads to a 6% increase in productivity. Similar numbers have been found in subsequent studies by Harris and Ioannides (2000) for U.S. metropolitan areas and by Ciccone (2002) for European regions. Here we have looked at employment levels rather than at employment density. But our qualitative results remain basically unchanged if density is taken as the dependent variable. Following the insights of Ciccone and Hall (1996), we would expect 23 sectors that have been deconcentrating – such as manufacturing – to have experienced a fall in spatial productivity (and wage) differences. The opposite should have occurred for aggregate employment and services. These predictions about productivity and wages are speculative, and warrant further investigation. They are based on a world in which employment dynamics are driven by changing agglomeration and congestion effects on the production side. An example of such approach can be found in Chatterjee and Carlino (2001) who argue that rising aggregate employment causes congestion costs to rise faster in more dense areas, leading to deconcentration of jobs. However, other forces – such as congestion on the consumption side or a change in people's preferences – may also be at work. In that case, the picture may be more complex. For instance, soaring house prices in urban areas could be consistent with densely populated areas losing employment but experiencing rising wages. Similarly, if people have an increasing preference to live in low density areas (Beale, 1977), this may lead to deconcentration of employment but increasing wage differentials. On the methodological side, our research shows the importance of using non-parametric methods and of looking at the entire distribution, not just at cities. It also demonstrates that β-convergence tests, even when done non-parametrically, are not sufficiently informative. Computing the ergodic distribution associated with a given set of transition probabilities is more useful to understand spatial trends. Moreover, our approach is able to condition on time-invariant characteristics in a way that is fully consistent with standard analysis of conditional β-convergence. The methodology developed here can easily be applied to the study of any distributional dynamics. This paper leaves a number of other questions unanswered. First, it is unclear whether the forces identified here operate in a similar manner in other time periods and other parts of the world. Applying the same approach to other data sets is necessary before we can conclude that the process described here generalizes beyond the confines of this study. Second, the methodology presented here does not (yet) allow statistical inference in the normal sense. Statistical tests are reported for some of the statistics presented here, such as confidence intervals for kernel regressions. But we do not present a ‘test’ of (conditional or unconditional) convergence based on estimated ergodic distributions. In principle, such a test could be developed provided an intuitively satisfying counter-factual distribution could be devised. It should also be possible to use bootstrapping to test whether the mode of the ergodic distribution has shifted to the left or the right relative to the current distribution (Kremer et al., 2000). Developing such tests is left for future research.