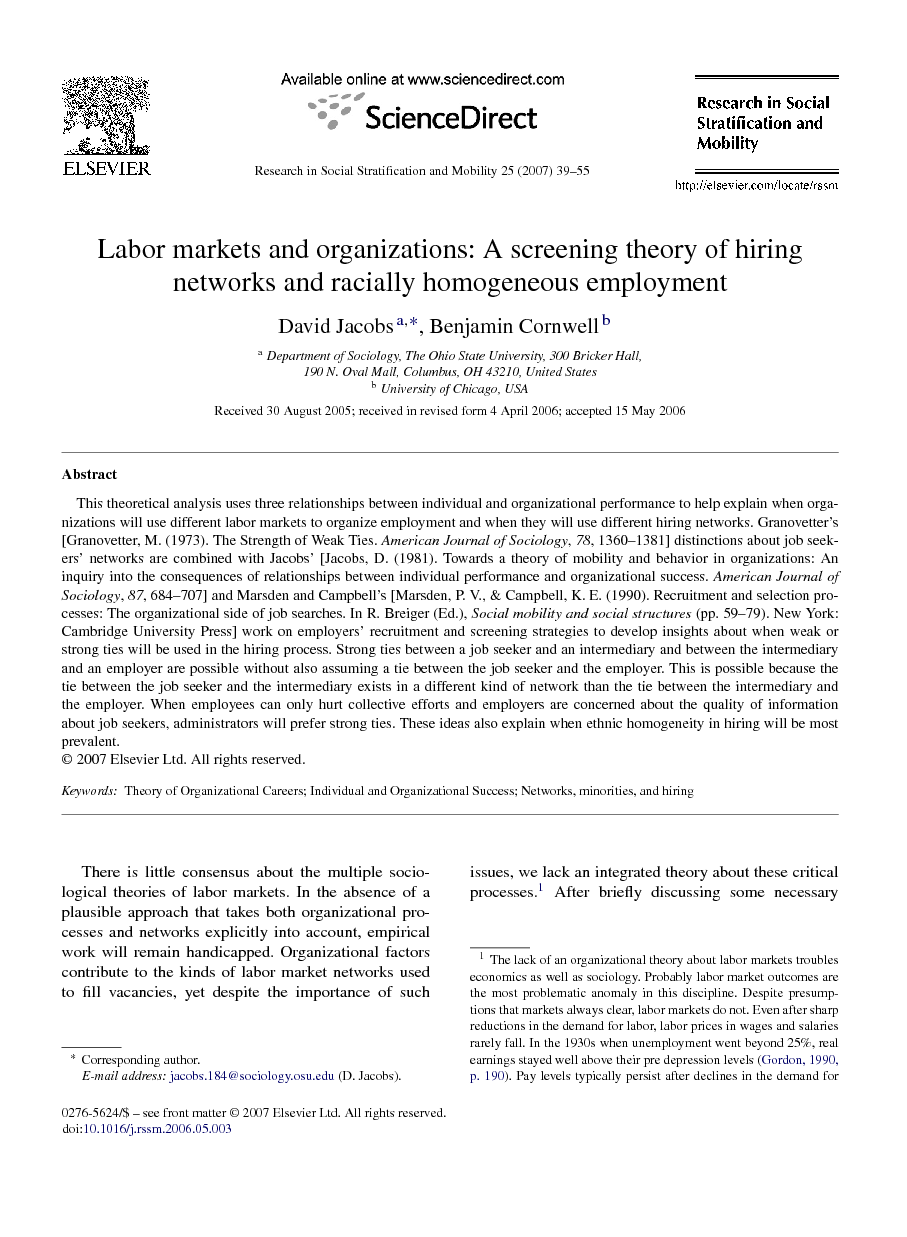 This theoretical analysis uses three relationships between individual and organizational performance to help explain when organizations will use different labor markets to organize employment and when they will use different hiring networks. Granovetter's [Granovetter, M. (1973). The Strength of Weak Ties. American Journal of Sociology, 78, 1360–1381] distinctions about job seekers’ networks are combined with Jacobs’ [Jacobs, D. (1981). Towards a theory of mobility and behavior in organizations: An inquiry into the consequences of relationships between individual performance and organizational success. American Journal of Sociology, 87, 684–707] and Marsden and Campbell's [Marsden, P. V., & Campbell, K. E. (1990). Recruitment and selection processes: The organizational side of job searches. In R. Breiger (Ed.), Social mobility and social structures (pp. 59–79). New York: Cambridge University Press] work on employers’ recruitment and screening strategies to develop insights about when weak or strong ties will be used in the hiring process. Strong ties between a job seeker and an intermediary and between the intermediary and an employer are possible without also assuming a tie between the job seeker and the employer. This is possible because the tie between the job seeker and the intermediary exists in a different kind of network than the tie between the intermediary and the employer. When employees can only hurt collective efforts and employers are concerned about the quality of information about job seekers, administrators will prefer strong ties. These ideas also explain when ethnic homogeneity in hiring will be most prevalent.

There is little consensus about the multiple sociological theories of labor markets. In the absence of a plausible approach that takes both organizational processes and networks explicitly into account, empirical work will remain handicapped. Organizational factors contribute to the kinds of labor market networks used to fill vacancies, yet despite the importance of such issues, we lack an integrated theory about these critical processes.1 After briefly discussing some necessary elements from prior work (Jacobs, 1981), we present a combined organizational and network framework based on position characteristics that condition administrative decisions about hiring, careers, and other labor market outcomes. Although this perspective will be used to explain many labor market and career outcomes, at the end of this paper we emphasize one extremely important consequence. Work on gender and employment has considered organizational level processes (Kirschenman & Neckerman, 1991), but research on minority hiring has largely neglected these effects (but see Braddock & McPartland, 1987). The theory we develop here suggests that organizations do not use the same hiring networks when they fill different positions. This divergence creates some crucial obstacles that minorities face when they seek many jobs. As a result, minority hiring is automatically reduced in these positions. These obstacles faced by minorities are based on the screening methods and resulting networks that provide most optimal method for organizations to select prospective employees when they fill vacancies for such positions. Granovetter's (1973) seminal insights about the effects of weak tie networks provide a foundation for this analysis. In contrast to strong ties, actors connected by weak ties obtain superior information, so job seekers linked by weak ties should get better jobs. Yet Granovetter's predictions about the efficacy of weak ties apparently do not hold when some common conditions are present. Murray, Rankin, and Magill (1981) find that strong rather than weak ties are more important when demand for labor is weak. Other analyses (Bridges & Villemez, 1986; Marsden & Hurlbert, 1988) suggest that weak ties do not help applicants get better paying jobs, while additional findings (Lin et al., 1981a and Lin et al., 1981b) are not always consistent with Granovetter's expectations. Our goal is to develop a combined organizational and network framework that uses position characteristics to explain some of these anomalies. Following Marsden and Campbell (1990), we see the job seeker–intermediary–employer triad as produced by different social relationships. Labor markets are dualistic settings in which job seekers’ and employers’ utilization of networks must be considered simultaneously because the ties between job seekers and intermediaries often are qualitatively different from the ties between intermediaries and employers. Such ties are best viewed as existing in separate but co-existing networks. This distinction will let us relax Granovetter's “forbidden triad” redundancy argument as it allows situations in which strong ties between A and B as well as strong ties between B and C could exist without a tie existing between A and C. Recognition of these separate networks will let us develop what seems to be a new approach that highlights organizational conditions that make strong ties more useful than their weak counterparts. The argument presented in this paper rests on Jacobs’ (1981) classification of three common organizational positions. These positions are defined by how they shape relationships between individual and organizational performance. When Granovetter's contrasts between strong and weak ties are combined with this positional typology, the conditions that determine when his argument applies and when it does not can be spelled out with greater precision. Granovetter's claims about the superiority of weak ties make prima facie sense from the job seeker's standpoint, but weak tie networks are not always best for employers. Our presentation will show the conditions when administrators will try to use strong-tie hiring networks. From the employer's standpoint, an overriding concern is the quality of information particularly when some organizational vacancies must be filled. These incentives operate coextensively with the job seeker's need for a greater quantity of information about vacancies. We begin by presenting (with some refinements) postulates about the effects of different relationships between individual and organizational performance based on the typology in Jacobs (1981). To develop new perspectives on hiring networks, the next section briefly summarizes Jacobs’ discussion about how these considerations affect careers, but it adds new material on the kinds of labor market arrangements that organizations use in units dominated by these positions. The third section combines these ideas with Granovetter's network approach to provide a novel argument about when strong and weak ties will be most useful to employers. We go on to use this framework as the basis for new ideas about some organizational conditions that will determine when minorities face increased obstacles when they seek employment. This presentation will focus on effects (see Blalock, 1969) without making exhaustive efforts to explain alternative causes.2 While this analysis relies on a positional typology, other explanations clearly matter. Although such similar practices may not be optimal, institutional theory suggests that organizations sometimes will use identical hiring procedures to fill dissimilar positions because these hiring choices must be legitimated or because administrators must abide by externally imposed uniform standards. The larger point is that one model cannot capture all that happens in such complex processes, so, in what follows, ceteris paribus assumptions will always be in force. This theoretical analysis spells out a model of organizational hiring and other labor market outcomes by focusing single-mindedly on the effects of relationships between individual performance in organizational positions and the success of the employing organization, but no claim is made that other approaches do not provide equally useful insights.3

These arguments about the usefulness of strong versus weak ties are summarized in Fig. 4. Recall that our framework hinges on two attributes: (1) position characteristics, and (2) the existence of multiple networks. Most network-oriented labor market research emphasizes the implications of weak ties for the quantity of information received by job seekers. By considering the relationships between individual and organizational success, we show when employers will have incentives to use strong ties to recruit employees. This analysis also uncovers the residual benefits for job seekers who make contact with employers via strong ties in these situations. The paradox of labor market information flow concerning goal destructive jobs is that while weak ties are beneficial to job seekers due to their ability to provide increased information, strong ties are beneficial to employers due to their ability to generate information that is more accurate. And because employers have the final say about who is hired, contacts with employers through strong ties should enhance applicant success in goal destructive positions. A similar process guides employment in irrelevant positions where particularism dominates. Weak ties therefore are beneficial only to candidates who seek goal-enhancing jobs or those who seek largely irrelevant jobs in spot labor markets.These conditional refinements may explain why tests of Granovetter's seminal ideas have not always been supportive. Results suggest that weak ties do not seem to help candidates get jobs with better pay (Bridges & Villemez, 1986; Graaf & Flap, 1988; Marsden & Hurlbert, 1988). While Lin et al., 1981a and Lin et al., 1981b find some results supporting Granovetter, other findings do not (but see Granovetter, 1983). Yet in all of this work little or no attempt is made to consider position attributes. Burt (1997) considers the contingent effect of network ties when job seekers compete for positions sought by many others, but the only study that looks at a pure example of a one of the positions enumerated in Fig. 1 (Murray et al., 1981 focus on a goal enhancing job) finds results consistent with our arguments. If the utility of strong or weak ties depends on how positions limit the relationship between individual and organizational performance, inconsistent results can be expected if researchers analyze an indeterminate mix of these three different organizational positions. If our analysis is correct, researchers should be careful to take the kinds of organizational vacancies into account when they conduct quantitative analyses. If their analyses instead are based on an uncertain sample of these different positions, findings will be contradictory and ungeneralizable. More generally, the novel features of this analysis begin to provide insights about how organizational processes affect labor markets and hiring. The first section provided a foundation by presenting the three relationships between individual and organizational performance and their effects on careers and mobility, and it added fresh material on the kinds of labor markets used to organize employment when these three positions are present. The next section extended the theory by providing new treatments about how this organizational framework accounts for hiring through either strong or weak ties. Finally, these insights about employment networks were used to clarify the different effects of competition on minority hiring. It is distressing that minority employment difficulties appear to rest on such influential and persistent explanatory factors. Although this analysis may appear to be pessimistic, it still may be valuable. We probably do not live in the best of all possible worlds where the inevitable effects of competitive markets will automatically eliminate racially or ethnically based employment differentials. The more important point is that attempts to produce equal opportunity employment are unlikely to be successful if we ignore or underestimate the strength of these countervailing factors that make homogeneous hiring so persistent.