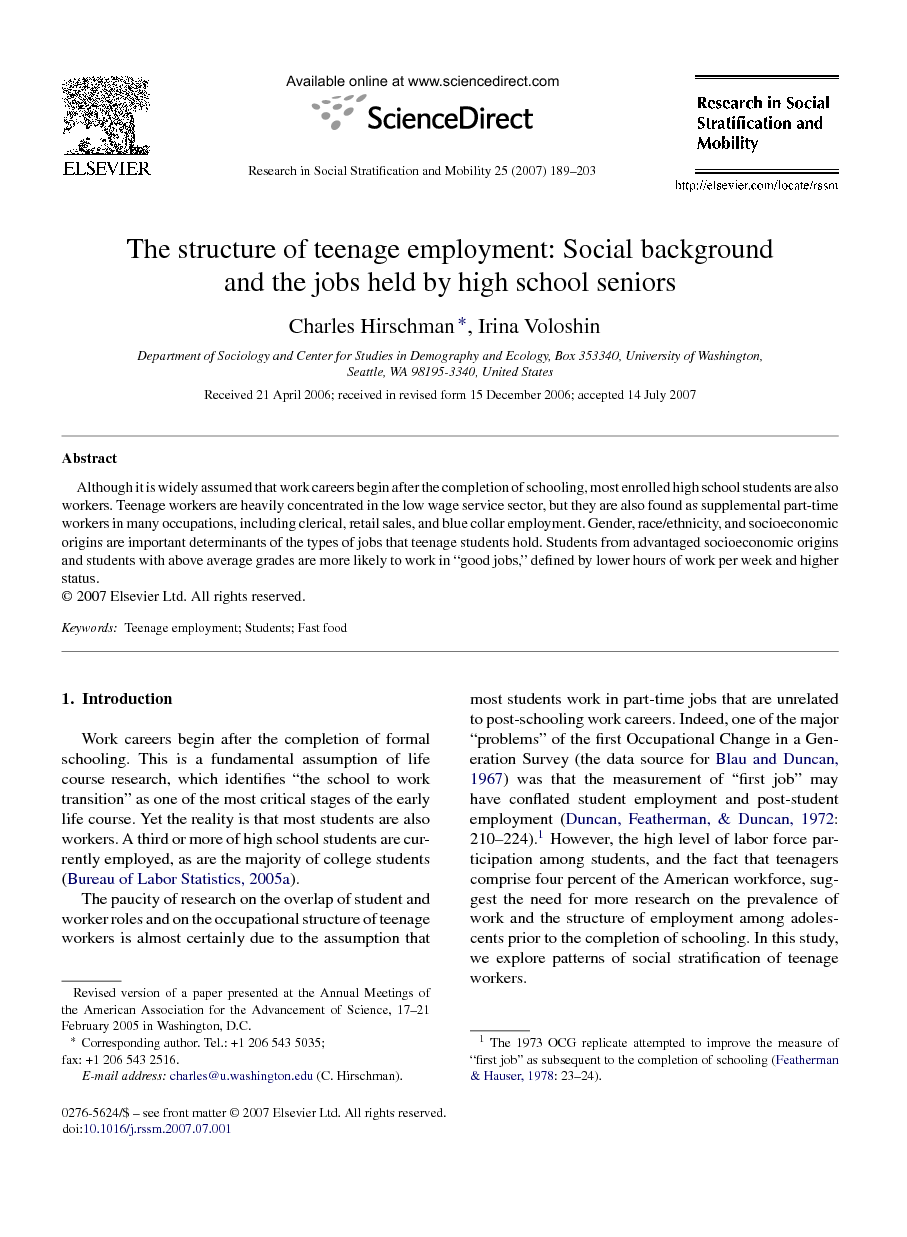 Although it is widely assumed that work careers begin after the completion of schooling, most enrolled high school students are also workers. Teenage workers are heavily concentrated in the low wage service sector, but they are also found as supplemental part-time workers in many occupations, including clerical, retail sales, and blue collar employment. Gender, race/ethnicity, and socioeconomic origins are important determinants of the types of jobs that teenage students hold. Students from advantaged socioeconomic origins and students with above average grades are more likely to work in “good jobs,” defined by lower hours of work per week and higher status.

Work careers begin after the completion of formal schooling. This is a fundamental assumption of life course research, which identifies “the school to work transition” as one of the most critical stages of the early life course. Yet the reality is that most students are also workers. A third or more of high school students are currently employed, as are the majority of college students (Bureau of Labor Statistics, 2005a). The paucity of research on the overlap of student and worker roles and on the occupational structure of teenage workers is almost certainly due to the assumption that most students work in part-time jobs that are unrelated to post-schooling work careers. Indeed, one of the major “problems” of the first Occupational Change in a Generation Survey (the data source for Blau and Duncan, 1967) was that the measurement of “first job” may have conflated student employment and post-student employment (Duncan, Featherman, & Duncan, 1972: 210–224).1 However, the high level of labor force participation among students, and the fact that teenagers comprise four percent of the American workforce, suggest the need for more research on the prevalence of work and the structure of employment among adolescents prior to the completion of schooling. In this study, we explore patterns of social stratification of teenage workers. Prior research on teenage employment has focused almost exclusively on the impact of work on educational outcomes, including grades and dropping out. The primary theoretical and policy issue is the hypothesis that the roles of worker and student are incompatible, or at least incompatible with educational success (Greenberger & Steinberg, 1986). Yet most studies have concluded that there is little observable harm if students work a moderate number of hours per week; indeed, students who work less than 15 h/week generally have better educational outcomes than students who do not work at all (Carr, Wright, & Brody, 1996; McNeil, 1997; Mortimer & Finch, 1986). Students who work longer hours, especially more than 20 or 25 h/week, do have lower grades and are more likely to drop out of school (D’Amico, 1984), however, it is unclear whether high intensity work is a cause, a consequence, or just a correlate of poorer educational outcomes. The hypothesized causal impact of teenage employment on educational outcomes hinges, in large part, on the selectivity of students into employment and different types of jobs. Before addressing this question, we describe the occupational structure of teenage employment and its relationship to the adult labor market. Within the teenage labor market structure, we attempt to identify the dimensions of occupational status and preferable job characteristics. Then we address the question of selectivity of students to jobs within the classic analytical framework of social stratification research. Specifically, we ask if family background and ascriptive characteristics, such as gender, and race and ethnicity, influence teenage employment and the attainment of higher status jobs. Although we refer to teenage employment in general, our empirical focus is on the employment patterns held by several cohorts of high school seniors in a West Coast metropolitan area. Although this is a limited geographical and temporal sample, the patterns reported here are likely to be representative of teenagers more broadly. We find that there is a clear structure between the social backgrounds of students and the jobs they hold. Advantages of family origins and school achievement are positively associated with paid employment, and advantaged students are especially more likely to hold “good jobs” outside of prototypical teenage concentration in the fast food sector and related service sector jobs.