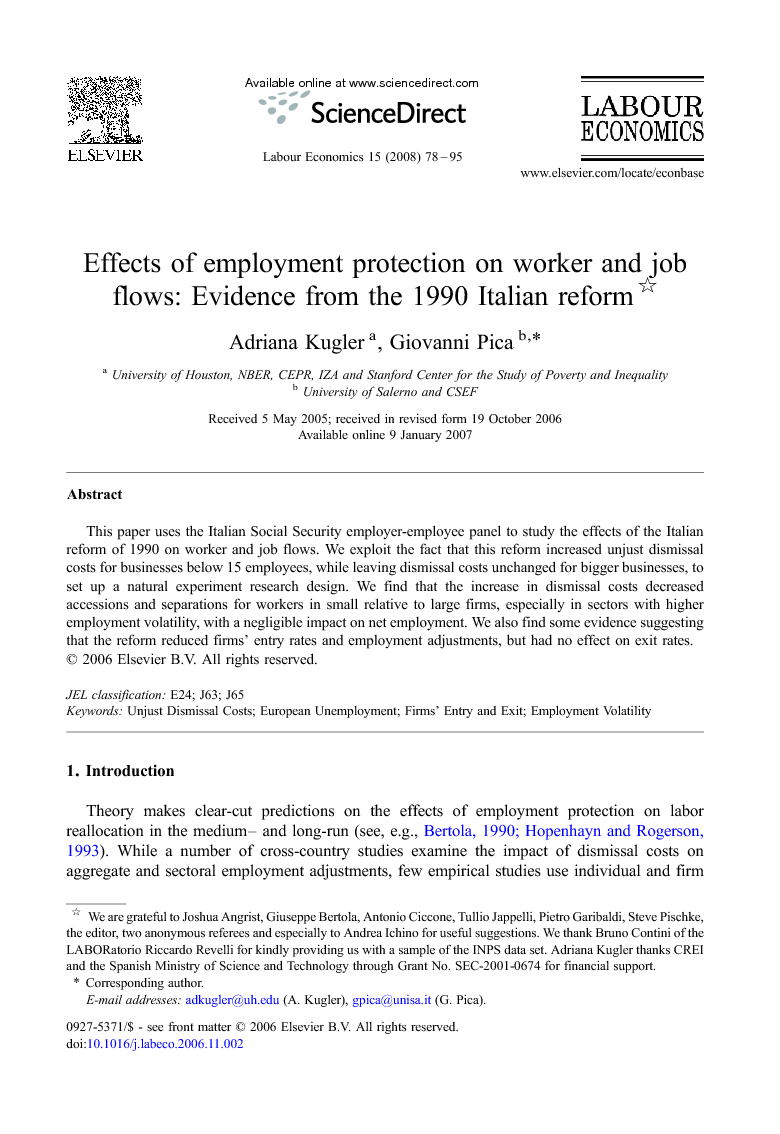 This paper uses the Italian Social Security employer-employee panel to study the effects of the Italian reform of 1990 on worker and job flows. We exploit the fact that this reform increased unjust dismissal costs for businesses below 15 employees, while leaving dismissal costs unchanged for bigger businesses, to set up a natural experiment research design. We find that the increase in dismissal costs decreased accessions and separations for workers in small relative to large firms, especially in sectors with higher employment volatility, with a negligible impact on net employment. We also find some evidence suggesting that the reform reduced firms' entry rates and employment adjustments, but had no effect on exit rates.

Theory makes clear-cut predictions on the effects of employment protection on labor reallocation in the medium– and long-run (see, e.g., Bertola, 1990 and Hopenhayn and Rogerson, 1993). While a number of cross-country studies examine the impact of dismissal costs on aggregate and sectoral employment adjustments, few empirical studies use individual and firm level data to examine the impact of dismissal costs on worker and job flows. Moreover, the few studies which rely on microdata focus on the intensive margin of adjustment, and often ignore adjustments on the extensive margins through entry and exit. In this paper, we use an Italian employer–employee panel to examine the effects of dismissal costs on worker and job flows. Italy is an interesting country to study these effects because it is one of the strictest countries in terms of employment protection legislation. More importantly, in 1990 Italy introduced a labour market reform which increased employment protection for workers employed under permanent contracts in businesses with fewer than 15 employees relative to those in businesses with more than 15 employees. We exploit the differential increase in the costs of unfair dismissals in small relative to large businesses after 1990 to study the impact of dismissal costs on labour flows. We use a differences–in–differences approach by comparing worker and job flows in small and large firms before and after the reform. Our empirical analysis uses administrative data from the Italian Social Security Institute (INPS). Our data set is an employer–employee panel which includes information on: dates of hiring and separation of the worker; dates of incorporation and termination of the firm, and the annual average number of employees. We use these data to examine worker flows (i.e., accessions and separations), and job flows on the intensive (i.e., employment changes) and extensive (i.e., entry and exit) margins. We find that accessions and separations decreased by about 13% and 15% in small relative to large firms after the reform. The results are robust to the inclusion of time, sector and region effects, sector– and region-specific time effects, and size-specific cyclical effects. Moreover, we find evidence of a bigger effect of the reform in sectors where the variance of employment growth was larger prior to the reform, and thus where the increase in dismissal costs was likely to be binding. On the other hand, a simulation exercise based on a steady-state condition shows that the reform hardly affected net employment. We then examine the impact on job flows and find evidence suggesting that the reform had some effect on the intensive and extensive margins of adjustment. In particular, we find some evidence that the reform decreased employment adjustments in small relative to large firms. We also find that small firms were less likely to enter the market compared to large firms after the reform. This is consistent with a rise of dismissal costs lowering the present value of the future stream of profits and leading to less entry. On the other hand, we find no differential effects on exit rates of small relative to large firms after the reform. A number of studies have exploited the variation in employment protection legislation across firms of different sizes within Italy, but ours is the first study to fully exploit both the temporal and cross sectional variation in employment protection legislation with regards to the 15 employee threshold. Boeri and Jimeno (2005) assess the effect of employment protection on lay-off probabilities by comparing small and large firms. Borgarello, Garibaldi and Pacelli (2004), and Schivardi and Torrini (2004) evaluate the effects of employment protection on the size distribution of Italian firms, by looking at the probability of firm size adjustments around the 15 employee threshold.1 These papers identify the effect of employment protection by exploiting the fact that Italian establishments with fewer than 15 employees are subject to lower dismissal costs than firms with more than 15 employees. This identification strategy assumes that small and large establishments are the same along any dimensions not observed by the econometrician (like, for example, different costs of capital due to the differential impact of borrowing constraints on firms of different sizes). By contrast, our differences–in–differences approach exploits the variation in employment protection between small and large firms as well as the temporal variation in the legislation. Our baseline approach thus allows small and large firms to differ in terms of time-invariant unobservables and, instead, makes the weaker assumption that small and large firms are affected similarly by macro-economic shocks.2 Moreover, we also rely on a differences–in–differences framework which allows for small and large firms to be affected differently by the business cycle. This approach makes the weaker assumption that the effect of the business cycle on small firms is the same before and after the reforms, although different from the effect of the business cycle on large firms. The rest of the paper is organized as follows. Section 2 describes the evolution of dismissal costs in Italy. Section 3 explains the identification strategy used to evaluate the impact of dismissal costs in Italy. Section 4 describes the Social Security data and presents estimates of the effects of the rise in dismissal costs on worker and job flows in Italy

In this paper, we present new evidence on the impact of dismissal costs on worker and job flows. We use an employer–employee panel drawn from the Italian Social Security records to examine the effects of dismissal costs on workers' accessions and separations, and on firms' employment changes and entry and exit rates. We exploit the fact that dismissal costs increased in Italy after the 1990 reform for firms with fewer than 15 employees relative to larger firms. The adoption of this reform allows us to use a differences–in–differences approach that helps to overcome identification problems in previous studies, which only exploit cross-country variation and cross-sectoral variation in dismissal costs within a country. We find that both accession and separation probabilities decreased in small relative to large firms after the 1990 reform. In particular, our results imply a decrease of as much as 13% in accessions and 15% in separations. Moreover, we find that the effect is more pronounced in those sectors that were more volatile before the reform, and where dismissal costs are likely to bind. On the other hand, the decreased accessions and separations appear to generate only a negligible increase in net employment. Aside from the effect of the reform on worker flows, we look at the effects of the reform on employment adjustments at the intensive and extensive margins. We find some evidence that the 1990 reform decreased year–to–year employment changes, but the results are imprecise when size-specific cyclical effects are included. This hints at the need to analyze shorter-frequency job reallocation rates. On the other hand, our estimates suggest that entry rates of small relative to large firms declined by as much as 34% after the 1990 reform, while having no impact on exit rates. Overall, these results support the view that dismissal costs lower mobility by reducing workers flows into and out of employment. At the same time, we find some evidence suggesting that dismissal costs reduce employment changes and entry. While the impact of dismissal cost on the extensive margin has hardly being studied, our results are consistent with a recent study by Autor, Kerr and Kugler (2006) which uses establishment-level data and also finds reductions in employment changes and entry rates following the introduction of employment protection doctrines in the U.S.