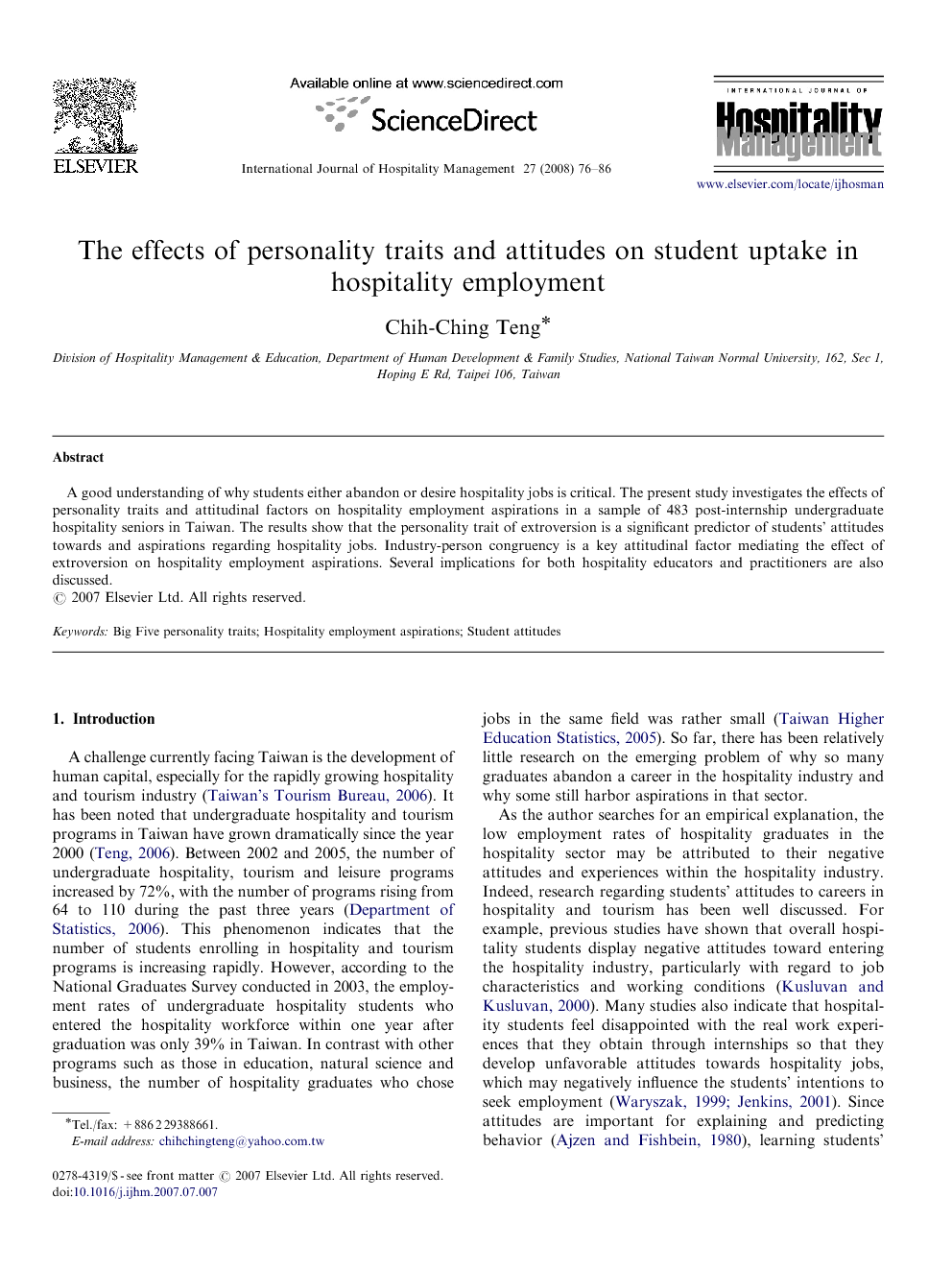 A challenge currently facing Taiwan is the development of human capital, especially for the rapidly growing hospitality and tourism industry (Taiwan's Tourism Bureau, 2006). It has been noted that undergraduate hospitality and tourism programs in Taiwan have grown dramatically since the year 2000 (Teng, 2006). Between 2002 and 2005, the number of undergraduate hospitality, tourism and leisure programs increased by 72%, with the number of programs rising from 64 to 110 during the past three years (Department of Statistics, 2006). This phenomenon indicates that the number of students enrolling in hospitality and tourism programs is increasing rapidly. However, according to the National Graduates Survey conducted in 2003, the employment rates of undergraduate hospitality students who entered the hospitality workforce within one year after graduation was only 39% in Taiwan. In contrast with other programs such as those in education, natural science and business, the number of hospitality graduates who chose jobs in the same field was rather small (Taiwan Higher Education Statistics, 2005). So far, there has been relatively little research on the emerging problem of why so many graduates abandon a career in the hospitality industry and why some still harbor aspirations in that sector. As the author searches for an empirical explanation, the low employment rates of hospitality graduates in the hospitality sector may be attributed to their negative attitudes and experiences within the hospitality industry. Indeed, research regarding students’ attitudes to careers in hospitality and tourism has been well discussed. For example, previous studies have shown that overall hospitality students display negative attitudes toward entering the hospitality industry, particularly with regard to job characteristics and working conditions (Kusluvan and Kusluvan, 2000). Many studies also indicate that hospitality students feel disappointed with the real work experiences that they obtain through internships so that they develop unfavorable attitudes towards hospitality jobs, which may negatively influence the students’ intentions to seek employment (Waryszak, 1999 and Jenkins, 2001). Since attitudes are important for explaining and predicting behavior (Ajzen and Fishbein, 1980), learning students’ attitudes can help predict their hospitality employment aspirations. For both hospitality educators and practitioners, a good understanding of what types of students desire hospitality jobs becomes critical. Research on job or career aspirations has traditionally focused on specific variables regarding employment situations, such as salary, job tenure, and perceived organizational success (e.g., Boudreau et al., 2001). Nevertheless, more enduring individual characteristics, particularly personality, may affect a student's intentions with regard to seeking employment (Berings et al., 2004). The last decade of personality research has suggested that the five-factor model of personality or the “Big Five” (e.g., Goldberg, 1990) is a valid way of describing many salient aspects of an individual's personality. The dimensions that make up the Big Five are extroversion, openness to experience, conscientiousness, agreeableness, and neuroticism (McCrae and Costa, 1987). Evidence from an analytic review (Tokar et al., 1998) shows that neuroticism is identified as a strong negative predictor, but that extroversion and conscientiousness demonstrate significant positive predictions regarding vocational choice-related behavior such as interest, aspirations, values, and decision making. It can be assumed that hospitality students who exhibit specific intentions of working in the hospitality industry should possess certain types of personality. Prior studies have mainly discussed the effects of either personality traits or attitudes on the individual's career choice behavior. There have been limited investigations into linking personality traits and attitudes, together with their influence on the individual's career selection. Ross (1992) and Silva (2006) suggest that specific personality variables appear to develop much more positive/negative attitudes toward hospitality jobs or careers. Answering the questions would extend our knowledge of the links. Based on that, the present study attempts to further the existing research in that the Big Five personality traits constitute the predictor influencing hospitality students’ attitudes, which will eventually affect their hospitality employment intentions. That is, the attitudes may serve as mediators of the Big Five's effect on employment aspirations. Accordingly, the aims of this study are to investigate the effects of the Big Five and the attitudinal factors on hospitality employment aspirations, in order to examine whether attitudinal factors will mediate the Big Five's effect on employment aspirations, and to provide insights into the impact of personality traits and attitudes with regard to employment intentions on the hospitality sector.

The research findings indicate that, overall, students display negative attitudes towards getting hospitality jobs, particularly in regard to job characteristics and working conditions. Individual traits, such as extroversion, demonstrate a significant prediction regarding students’ attitudes and their hospitality job aspirations. Furthermore, this study adds to the hospitality literature by examining the mediating effect of students’ attitudinal factors on the relationship between personality traits and hospitality employment aspirations. It appears that industry-person congruency is the key attitudinal factor mediating the effect of extroversion characteristics on hospitality job intentions. These empirical findings assist in clarifying what causes hospitality senior undergraduates to abandon or choose a career in the hospitality industry in Taiwan. The results have both educational and managerial implications regarding hospitality. First, the perceptions and attitudes of hospitality students should be carefully noted since they have incremental validity over personality traits in predicting hospitality employment aspirations. The hospitality sector has lost its appeal to most students due to its disadvantageous job characteristics and poor working conditions. It may require corrective attention and need to take further steps to increase hospitality graduate recruitment. With hundreds of students graduating from hospitality and tourism programs each year in Taiwan, an increase in their interest and commitment to the industry will raise their employment intentions and may increase the size of the hospitality workforce. Although there is clearly much work left to be done, possible solutions to the problem might start with improving the image of the industry, offering fair pay and benefits, providing more flexible working hours, and facilitating training and developmental opportunities. Second, despite undergraduate hospitality programs in Taiwan having recently rapidly increased, the educational quality of these programs remains unknown (Teng, 2006). Undergraduate programs are thought not only to mold students’ knowledge and skills, but also to affect their job attitudes and work values (Berings et al., 2004). Hence, hospitality educational institutions not only need to play a role in helping students establish realistic expectations by offering student services such as career counseling and guidance, but they should also bridge the gap between academic institutions and industrial organizations through cooperation such as more company visits, organizational internships, industrial guest speakers, applied research and collaborative teaching activities. Holland (1997) has indicated that career choice involves a process of adjustment between an individual's educational and work environment. This process also assists him or her to make a good job/career decision. If an individual has a better understanding and more knowledge regarding hospitality jobs, this can reduce the gap between his or her job expectations and the reality of working in the industry. Third, both extroversion characteristics and industry-person congeniality have been identified as significantly positive predictors of hospitality job aspirations. It has been claimed that finding a good fit between one's personality and the nature of one's work may well relate directly to the issue of deriving pleasure from work (Antony, 1998). Personality-career fit can be viewed as a vehicle for satisfying the basic needs of pleasure and fulfillment. As noted earlier, a student with extroversion characteristics is likely to find more pleasure in highly interactive hospitality jobs. Therefore, the present study suggests that both hospitality educators and practitioners should focus on recruiting individuals with extroverted personalities by capitalizing on some personnel selection skills such as personality assessment tools (e.g., the Big Five personality measures) and face-to-face interviews in order to increase the possibilities of ensuring congruency between the individuals’ personalities and the nature of the work.