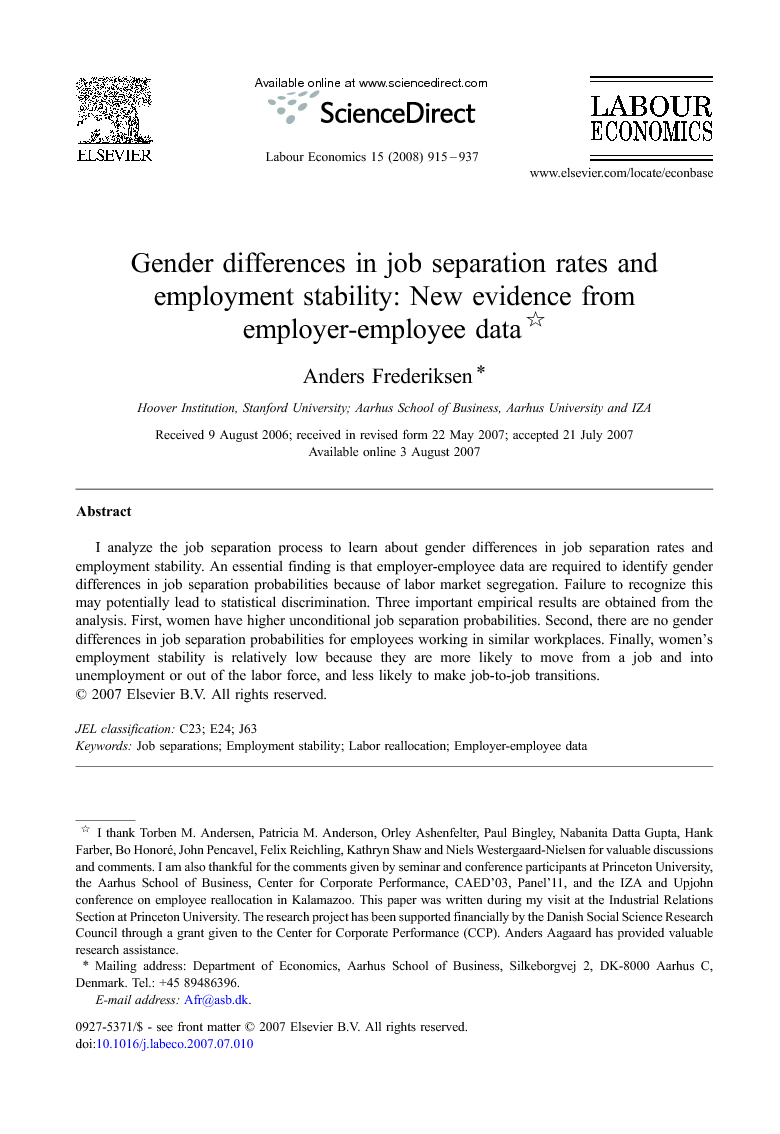 In this paper, I have studied the job separation process to learn about gender differences in job separation probabilities and employment stability. In contrast to earlier studies, which have focused on the importance of either individual or workplace characteristics, I use employer-employee data to obtain a series of new empirical results. The main finding in this paper is that there is no significant difference in job separation probabilities between men and women with similar characteristics working in similar workplaces. This is an important result because employers are concerned about the costs imposed by job separations. Therefore, even small differences in the expected likelihood of job separations across gender would lead to statistical discrimination. Given there are no systematic differences due to gender, these concerns should no longer be present. Hence, the observed segregation of men and women into different types of workplaces should not be due to statistical discrimination related to job separation decisions. A second important finding is that women currently working in the labor market experience relatively low employment stability. There are two reasons for this. First, men and women are to some extent segregated in the labor market, i.e., women tend to work in smaller low-wage workplaces with relatively low retention probabilities. Further, women have individual characteristics that are associated with relatively high job separation rates. Therefore, they experience job separations more frequently. Second, women have more transitions out of the labor market and into unemployment and make fewer job-to-job transitions. The analysis provides some scope for economic policy targeting gender equality in employment stability. For instance, policies eliminating the gender differences in observable individual and workplace characteristics may reduce the stability gap. Such policies include improvements of women's human capital accumulation and better childcare. Finally, this paper expands on previous research. For this reason, the analysis has deliberately been constrained, such that it clearly illustrates the information advantage of employer-employee data over previous studies focusing on either individual or workplace characteristics. This implies that additional studies of the job separation process and employment stability are warranted. For instance, the effect of individual wages on the job separation process remains to be established. It would also be interesting to understand the consequences of the revealed heterogeneity in job separation rates across both individuals and firms on investments in human capital. Thus, in addition to presenting a series of new empirical results, this study paves the way for future research.