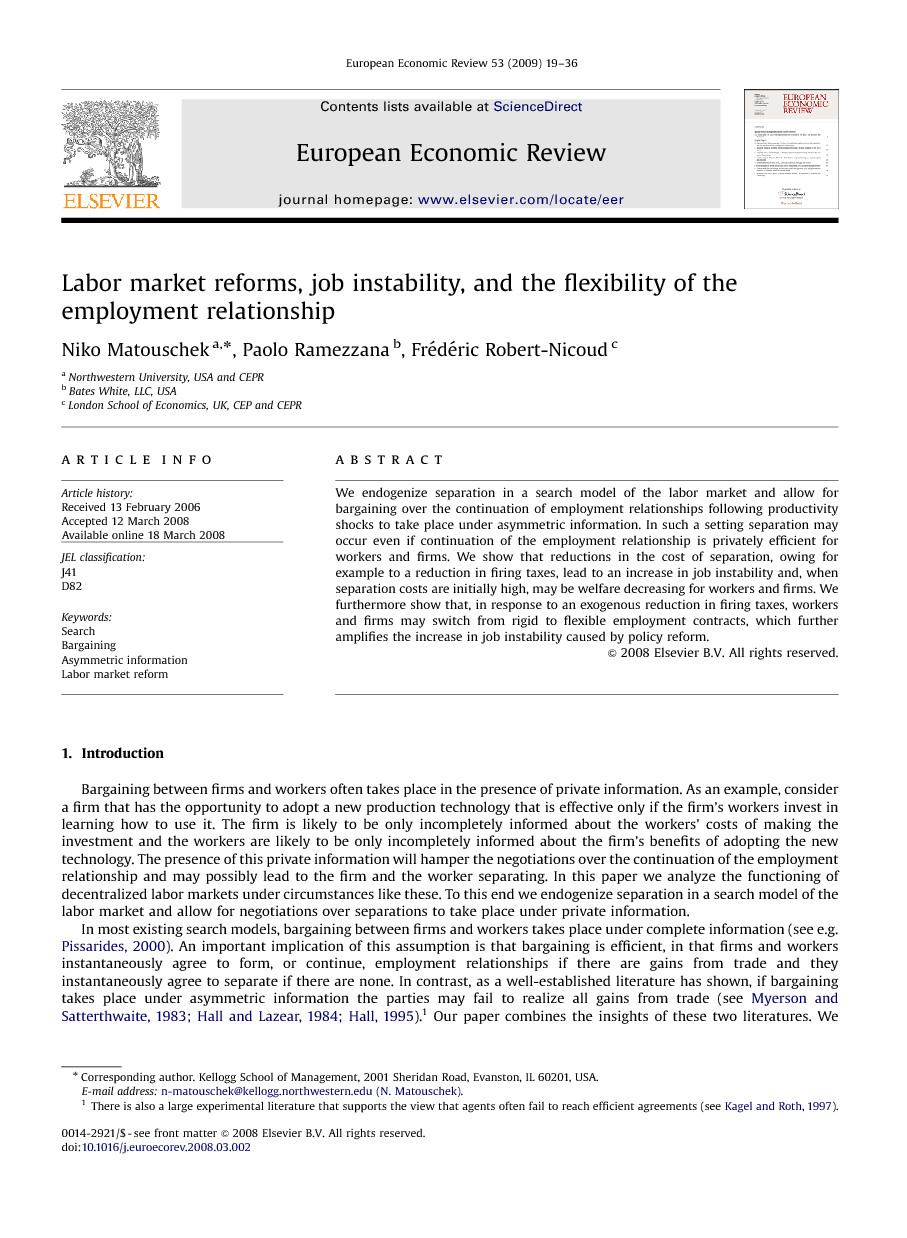 We endogenize separation in a search model of the labor market and allow for bargaining over the continuation of employment relationships following productivity shocks to take place under asymmetric information. In such a setting separation may occur even if continuation of the employment relationship is privately efficient for workers and firms. We show that reductions in the cost of separation, owing for example to a reduction in firing taxes, lead to an increase in job instability and, when separation costs are initially high, may be welfare decreasing for workers and firms. We furthermore show that, in response to an exogenous reduction in firing taxes, workers and firms may switch from rigid to flexible employment contracts, which further amplifies the increase in job instability caused by policy reform.

When firms and workers bargain over compensation they are often asymmetrically informed about relevant payoffs, such as profits and the workers’ opportunity costs. It is well-known that in such situations bargaining is likely to be inefficient, in the sense that firms and workers fail to realize all gains from trade. In this paper we investigate the implications of this type of bargaining inefficiency for the functioning of labor markets. Our analysis provides three main insights. First, it shows that when bargaining between firms and workers takes place under asymmetric information, a reduction in separation costs leads to an increase in job instability. Essentially, such a reduction makes it less costly for firms and workers to separate which, in turn, induces them to bargain more aggressively. In equilibrium this leads to more job separations. Second, a reduction in separation costs can make firms and workers worse off. In other words, the increase in job instability can outweigh the direct benefit of a reduction in separation costs. Finally, our analysis shows that when wage renegotiations take place under asymmetric information, firms and workers may find it optimal to adopt rigid employment contracts that make it more costly for them to separate in the future. Moreover, a reduction in firing taxes can lead to a one-off switch from rigid to flexible employment contracts. This contractual response induces firms and workers to bargain even more aggressively and thus further destabilizes employment relationships. As regards the robustness of our conclusions to alternative modelling choices, we address possible concerns that our results may depend on the assumed bargaining game by allowing firms and workers to play the most efficient bargaining game and show that for a number of common distributions our results continue to hold. In contrast, throughout we maintain the simplifying assumption that productivity shocks are match-specific. We believe that it would be interesting to analyze a model in which shocks are correlated—as this would shed some light on the, possibly different, effects of changes in separation costs on high and low productivity workers and firms. We leave this analysis for future work.