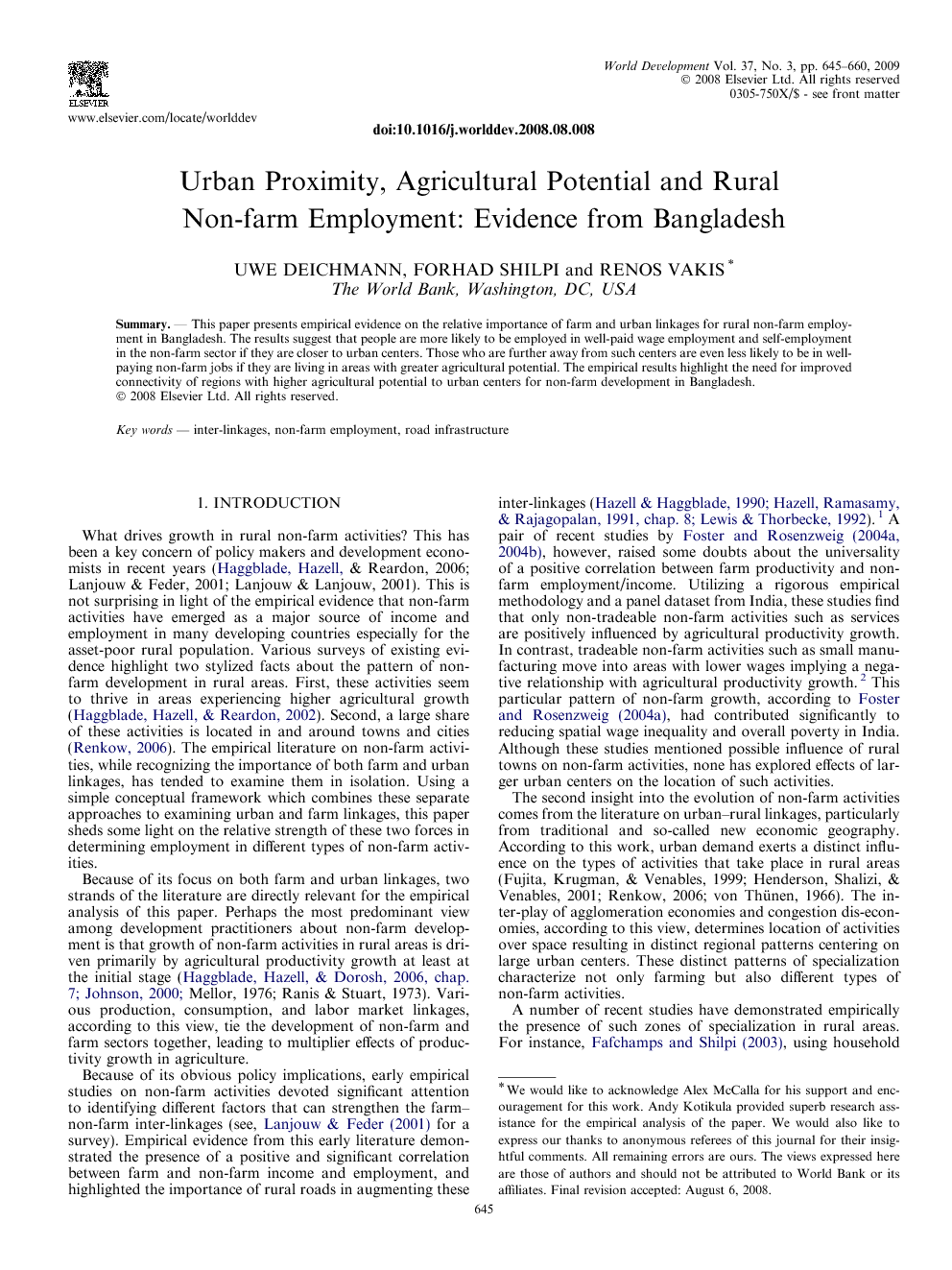 This paper presents empirical evidence on the relative importance of farm and urban linkages for rural non-farm employment in Bangladesh. The results suggest that people are more likely to be employed in well-paid wage employment and self-employment in the non-farm sector if they are closer to urban centers. Those who are further away from such centers are even less likely to be in well-paying non-farm jobs if they are living in areas with greater agricultural potential. The empirical results highlight the need for improved connectivity of regions with higher agricultural potential to urban centers for non-farm development in Bangladesh.

Rural areas, home to most of the world’s poor, have experienced considerable employment diversification into non-farm activities during the last decade. Recognizing its potential for stimulating growth and reducing poverty, there has been a resurgence of interest among researchers and policy makers in identifying factors that can spark growth in the rural non-farm economy. While the roles of farm and urban linkages in promoting non-farm activities are discussed frequently by development practitioners, empirical studies examined them in isolation of each other. Embedding the two linkages in a single specification, this paper provides empirical evidence on the relative role of farm and urban linkages in determining the probability of being employed in different types of non-farm activities. The econometric analysis focusing on different types of non-farm employment yields three main results. First, access to major urban centers matters greatly for high-return non-farm activities. Second, agricultural potential of a village also matters, but through its interaction with access to urban centers. The results specifically suggest that people are more likely to be employed in better-paid wage employment and self-employment in the non-farm sector if they are closer to urban centers. Those who are further away from such centers are even less likely to be in well-paying non-farm jobs if they are living in areas with greater agricultural potential. In contrast, low-return non-farm jobs, paying equal to or less than median agricultural wage of a village, are driven by local demand and are distributed much more evenly across geographic space. Finally, access to smaller rural towns with population of about 5,000 exerts little influence on non-farm activities. The empirical results thus highlight the need for improved connectivity of regions with higher agricultural potential (North-West region) to urban centers for stimulating growth in high-return wage employment and self-employment in non-farm activities in Bangladesh.34 As there are virtually no restrictions on migration, growth in this historically lagging region in Bangladesh will also have spill-over effects in other areas with lower agricultural productivity and perhaps on the development of small cities and towns within the region. While our empirical analysis is done in the context of Bangladesh, the findings have wider applicability in the context of developing countries. The results highlight the need for examining both farm and urban linkages simultaneously. Since the relative importance of the linkages is likely to vary across countries, country-specific estimation of the impact of these linkages will facilitate informed policy making with respect to investment in infrastructure and agriculture development. The analysis of employment patterns in this paper points to possible areas for future research. Because of our reliance on cross-section data, we utilized an instrumental variable approach to establish causality between non-farm employment and urban access and farm productivity potential. Availability of panel data and experimental data (with respect to placement of infrastructure such as a bridge) on employment and income would make it feasible to quantify the importance of different types of linkages (demand, labor market, input market, etc.). Similarly, while our analysis focused on the importance of infrastructure for non-farm employment growth, other policies such as investment in education may play an even more critical role in stimulating non-farm employment. Indeed, the interaction effect of infrastructure and education is likely to be equally important for non-farm employment and income growth.35 Given the complexity of issues involved and the lack of panel data to address them, this issue remains a priority area for future research.