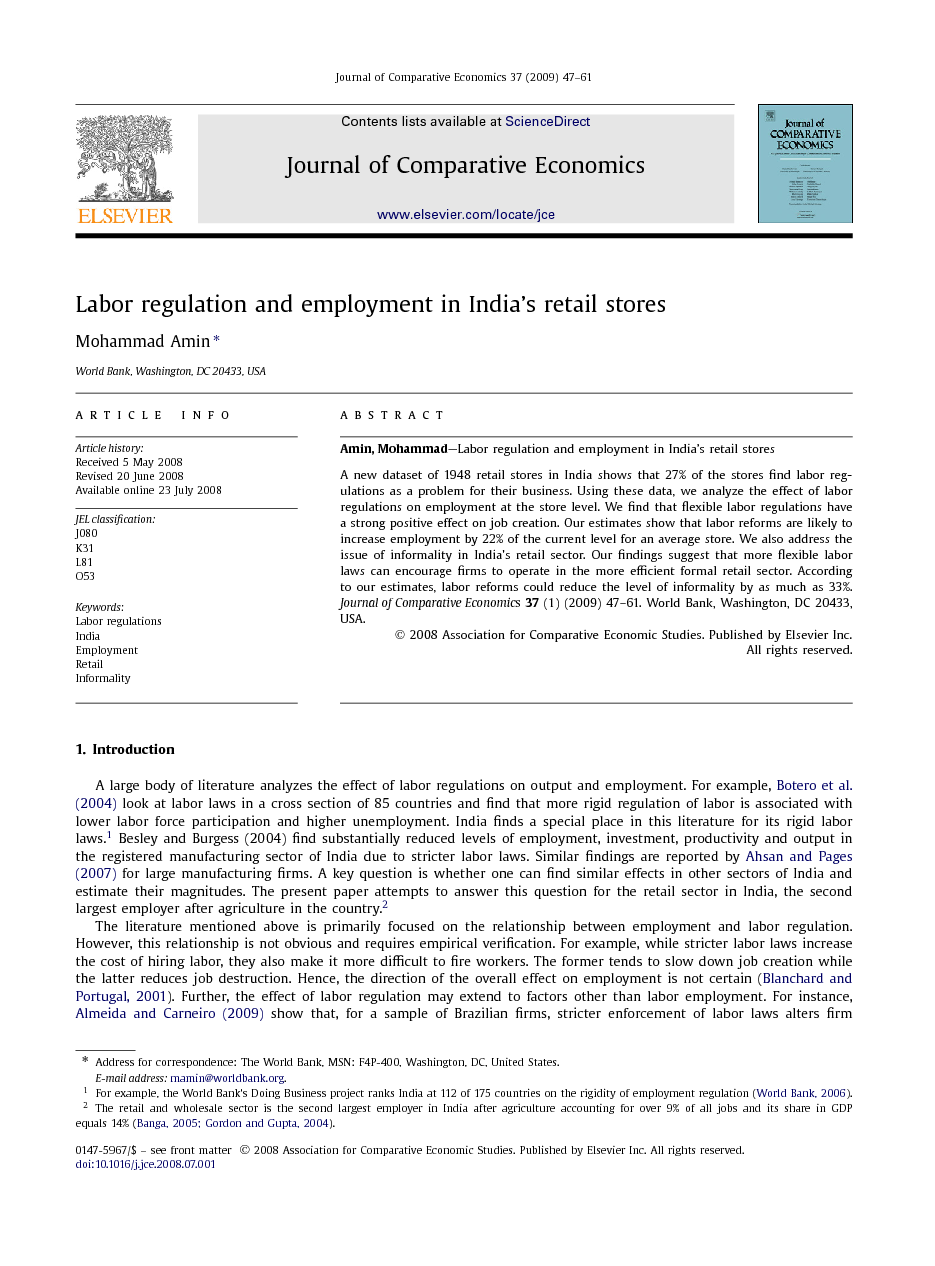 A new dataset of 1948 retail stores in India shows that 27% of the stores find labor regulations as a problem for their business. Using these data, we analyze the effect of labor regulations on employment at the store level. We find that flexible labor regulations have a strong positive effect on job creation. Our estimates show that labor reforms are likely to increase employment by 22% of the current level for an average store. We also address the issue of informality in India's retail sector. Our findings suggest that more flexible labor laws can encourage firms to operate in the more efficient formal retail sector. According to our estimates, labor reforms could reduce the level of informality by as much as 33%. Journal of Comparative Economics37 (1) (2009) 47–61.

A large body of literature analyzes the effect of labor regulations on output and employment. For example, Botero et al. (2004) look at labor laws in a cross section of 85 countries and find that more rigid regulation of labor is associated with lower labor force participation and higher unemployment. India finds a special place in this literature for its rigid labor laws.1Besley and Burgess (2004) find substantially reduced levels of employment, investment, productivity and output in the registered manufacturing sector of India due to stricter labor laws. Similar findings are reported by Ahsan and Pages (2007) for large manufacturing firms. A key question is whether one can find similar effects in other sectors of India and estimate their magnitudes. The present paper attempts to answer this question for the retail sector in India, the second largest employer after agriculture in the country.2 The literature mentioned above is primarily focused on the relationship between employment and labor regulation. However, this relationship is not obvious and requires empirical verification. For example, while stricter labor laws increase the cost of hiring labor, they also make it more difficult to fire workers. The former tends to slow down job creation while the latter reduces job destruction. Hence, the direction of the overall effect on employment is not certain (Blanchard and Portugal, 2001). Further, the effect of labor regulation may extend to factors other than labor employment. For instance, Almeida and Carneiro (2009) show that, for a sample of Brazilian firms, stricter enforcement of labor laws alters firm characteristics such as size, use of informal labor, etc. These effects have a significant impact on the overall performance of the economy. Another possibility is that labor regulations alter the composition of activity between the formal and informal sector. Stringent labor laws may encourage firms to operate in the informal sector where labor laws are hardly implemented. Similarly, if stricter labor laws reduce employment opportunities in the formal sector then some workers may seek work in the informal sector. The compositional shift (from formal to informal) is important because the informal sector is known to be less efficient than the formal sector and beset with a number of problems such as poor access to finance and contract-enforcement agencies (Djankov et al., 2003a), inefficiently small scale of production with little incentive to use modern technology, and lack of occupation and safety standards for workers. One limitation of existing work on labor regulations is that it is based solely on labor laws as they exist on the books with no consideration given to their enforcement. Hence, findings in the literature would mean little if there is a dichotomy between laws on the books and their enforcement. The World Bank Enterprise Survey provides valuable information on how stores perceive the severity of labor regulations for doing business. 27% of the stores in the full sample reported labor regulations as an obstacle for their business with a high of 53% in the state of West Bengal, 42% in Rajasthan and 39% in Maharashtra. These numbers dispel the notion that labor laws are not implemented in the retail sector for, absent enforcement, labor laws would not be an obstacle for any store. We use these reported perceptions to construct a measure of enforcement of labor laws and show that our results do not suffer from the potential weakness mentioned above. The present paper contributes to the literature on labor regulation in two important ways. First, we focus on the service sector in a developing country. The existing work on labor regulations is focused on manufacturing sectors despite the fact that services sectors are known to be highly labor intensive, accounting for a majority of jobs across countries. The retail and wholesale sector in India is the second largest employer (after agriculture) providing jobs to 9.4% of all formal workers in the country. An adverse effect of labor regulations on employment in the sector can have a significant impact on overall unemployment in the country. Second, existing studies are based on macro data which raises concerns about possible heterogeneity across data points. Our use of micro data allows us to control for a number of store (firm) characteristics that vary within and across good and bad regulation states. We are also able to analyze possible heterogeneity in the effect of labor laws on employment across small vs. large stores and temporary vs. permanent employment. Our findings on the effect of labor regulation on employment are consistent with the emerging literature on the institutions-performance nexus which Djankov et al. (2003b) refers to as “the new comparative economics.” The main theme of this literature is that with the collapse of socialism, the real comparison is now between various dimensions of the quality of institutions within capitalist countries. Studies in this literature show that economic outcomes are significantly affected by, for example, regulation of entry (Djankov et al., 2002), enforcement of creditor rights (Safavian and Sharma, 2007), enforcement of labor laws (Almeida and Carneiro, 2009) and corruption (Bo and Rossi, 2007). The rest of the paper is as follows. In Section 2 we discuss the structure of labor laws, describe our data and the estimation strategy. In Section 3 we report our main empirical findings for the level of employment at the store level. Section 4 contains the robustness checks. In Section 5 we analyze the relationship between labor regulation and the level of informality. A summary of the main findings is provided in the concluding section

A number of studies have shown that burdensome labor regulations can hinder job creation. These studies are largely confined to the manufacturing sectors and use macro data. The present paper finds similar evidence for a service sector (retailing) using micro data. Our results show that labor regulations in India's retail sector are detrimental to job creation and that labor reforms could increase employment in the sector by as much as 22% of the current level for an average store. This is a large effect when we take into account the fact that the retail sector in India is the second largest employer providing jobs to 9.4% of all workers. We also studied the issue of informality in India's retail sector. The development of modern retailing in the country hinges crucially on a transition from the informal to the formal retail sector. Our results show that more stringent labor regulation promotes informality and that labor reforms may be necessary to achieve the transition.