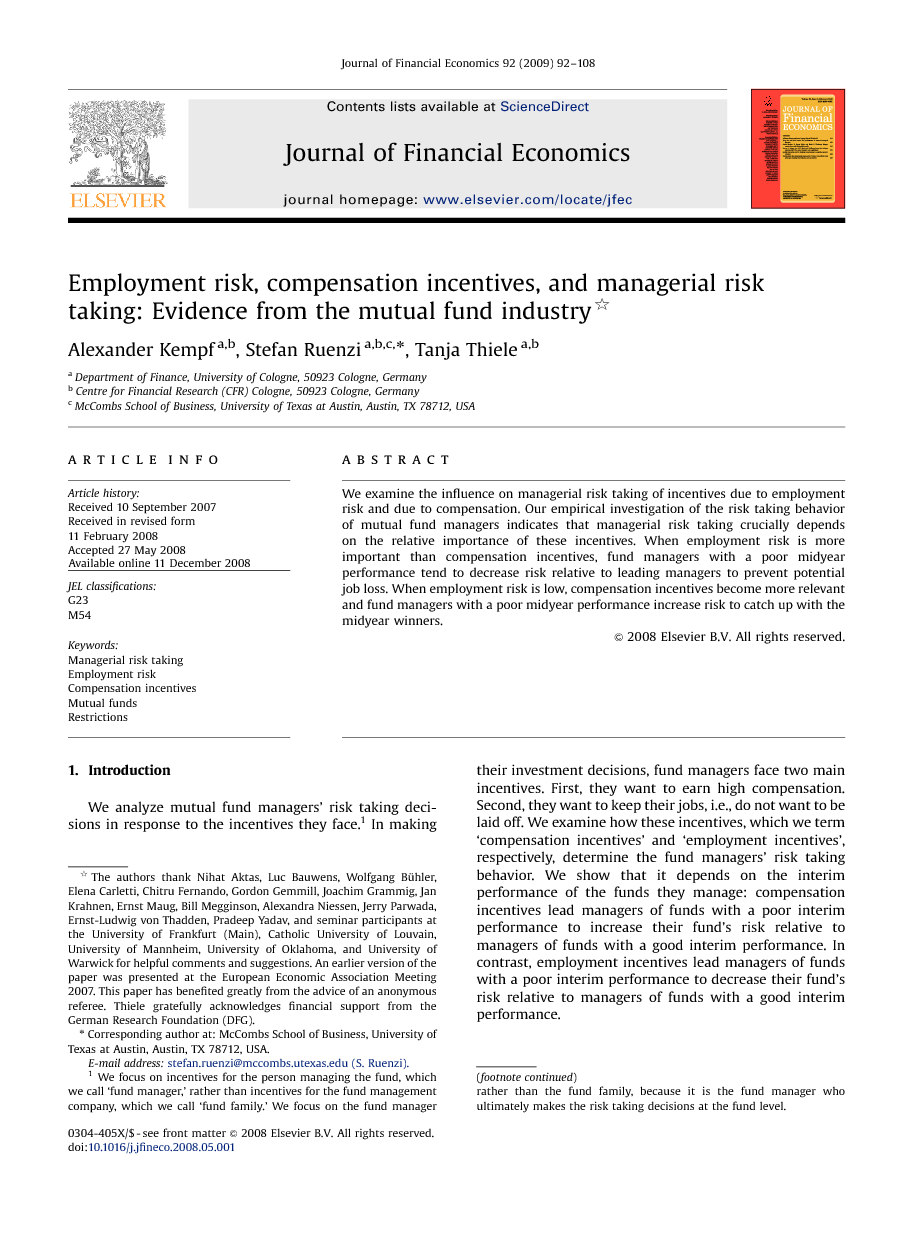 Mutual fund managers face various incentives that have an impact on their risk taking. While compensation incentives arising from the convex performance flow relationship are studied in great detail (e.g., Brown, Harlow, and Starks, 1996; Koski and Pontiff, 1999; Elton, Gruber, and Blake, 2003), there is little evidence on the impact of employment risk on the risk taking decisions of mutual fund managers. In this paper, we jointly examine compensation incentives and employment incentives. Using data on portfolio holdings of US equity mutual funds and stock returns from 1980 to 2003, we find that the way fund managers alter their risk in response to their midyear performance depends on the relative strength of their employment and compensation incentives. Our findings indicate that midyear losers increase their risk more than midyear winners in bull markets where compensation incentives would be more important. The opposite holds in bear markets, where employment incentives would dominate. These results reconcile contradictory results presented in earlier studies. Our results are neither driven by characteristics of the fund, the fund family, the market segment, or the fund manager nor by the reaction of managers to unexpected risk realization. We find that managers counterbalance risk surprises only if realized risk is higher than initially planned. This is consistent with the idea that fund managers face risk limits they must not or do not want to exceed by the end of the year. However, our main results are not affected by this response to risk surprises. Gaining a better understanding of the incentives driving fund managers’ behavior is important for fund investors and fund companies, as these incentives can lead to adverse managerial behavior. As Brown, Harlow, and Starks (1996) point out, risk adjustment of fund managers as a response to compensation incentives may not be optimal for fund investors. The same is true for risk adjustments due to employment incentives. They are not aimed at building a portfolio with optimal risk-return characteristics from the fund investor's point of view and can create additional trading costs, which eventually hurt performance (Bagnoli and Watts, 2000; Li and Tiwari, 2006; Huang, Sialm, and Zhang, 2008). James and Isaac (2000) show that risk changes due to such incentives can even lead to inefficient price formation in asset markets and might thus be of some interest from a regulatory point of view. Perhaps the most important implication of our study for future research on managerial risk taking is that temporal variations of compensation and employment incentives should not be neglected. Our findings suggest that ignoring such variations can easily deliver misleading results and eventually lead to erroneous conclusions. We believe that our results not only hold for managers of mutual funds, but also might have important implications for the behavior of managers of corporations in general. In the corporate world the business cycle might play a role similar to the role played by bull and bear markets in the mutual fund industry. For example, it is likely that employment risk is only a minor concern for managers in a boom period, while it might seriously impact their decisions in a recession. Analyzing the impact of business cycles on the incentives corporate managers face offers an interesting avenue for future research.