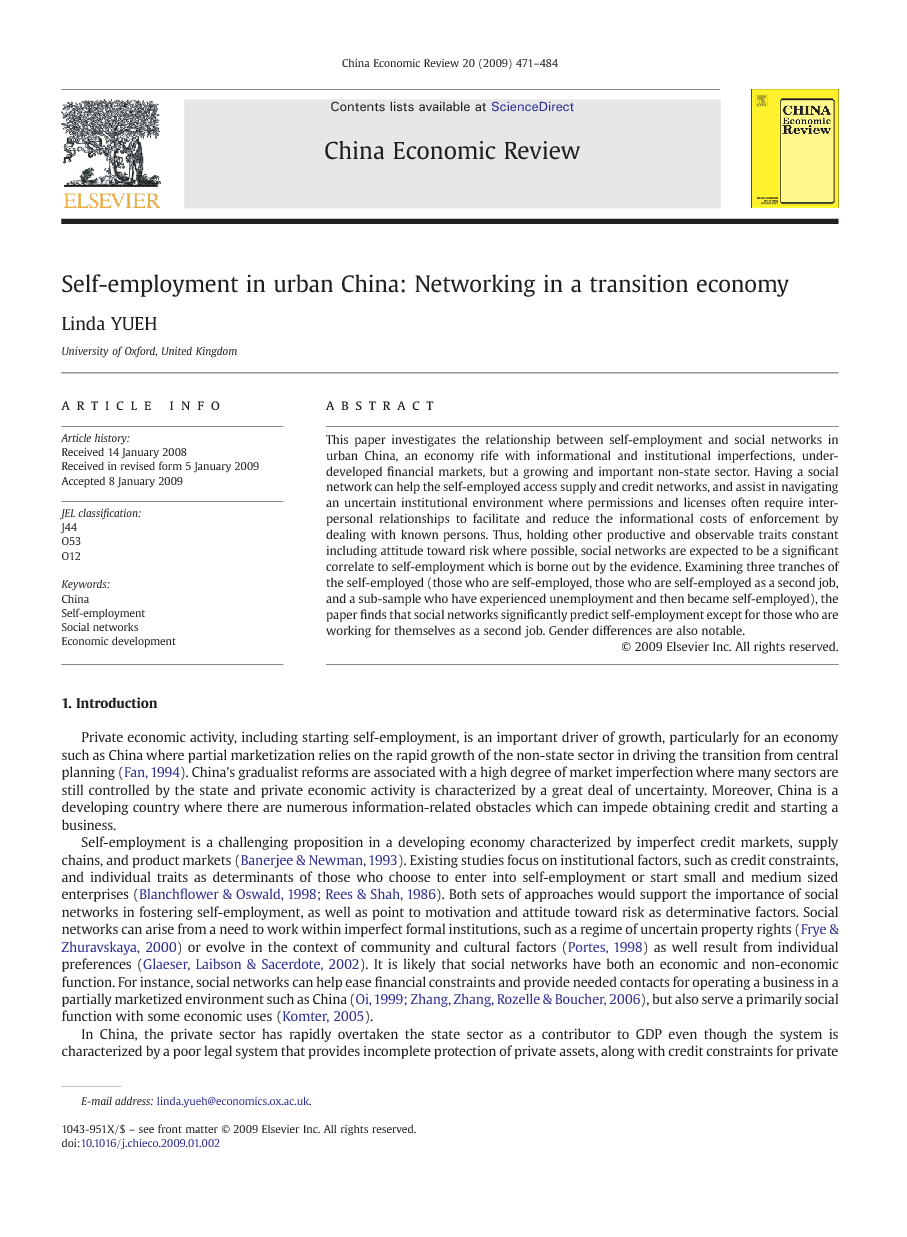 Private economic activity, including starting self-employment, is an important driver of growth, particularly for an economy such as China where partial marketization relies on the rapid growth of the non-state sector in driving the transition from central planning (Fan, 1994). China's gradualist reforms are associated with a high degree of market imperfection where many sectors are still controlled by the state and private economic activity is characterized by a great deal of uncertainty. Moreover, China is a developing country where there are numerous information-related obstacles which can impede obtaining credit and starting a business. Self-employment is a challenging proposition in a developing economy characterized by imperfect credit markets, supply chains, and product markets (Banerjee & Newman, 1993). Existing studies focus on institutional factors, such as credit constraints, and individual traits as determinants of those who choose to enter into self-employment or start small and medium sized enterprises (Blanchflower and Oswald, 1998 and Rees and Shah, 1986). Both sets of approaches would support the importance of social networks in fostering self-employment, as well as point to motivation and attitude toward risk as determinative factors. Social networks can arise from a need to work within imperfect formal institutions, such as a regime of uncertain property rights (Frye & Zhuravskaya, 2000) or evolve in the context of community and cultural factors (Portes, 1998) as well result from individual preferences (Glaeser, Laibson & Sacerdote, 2002). It is likely that social networks have both an economic and non-economic function. For instance, social networks can help ease financial constraints and provide needed contacts for operating a business in a partially marketized environment such as China (Oi, 1999 and Zhang et al., 2006), but also serve a primarily social function with some economic uses (Komter, 2005). In China, the private sector has rapidly overtaken the state sector as a contributor to GDP even though the system is characterized by a poor legal system that provides incomplete protection of private assets, along with credit constraints for private enterprises, and regulatory opacity. Despite these challenges, there is a growing segment of entrepreneurial activity that has propelled China along its gradualist transition path and helped it to achieve remarkable growth rates in the reform period. In such an imperfect legal and financial system, the characteristics of those who are able to enter self-employment are of interest. Moreover, the dominance of informal and relation-based contracting in China suggests that the elements fostering private sector development are likely to evolve around social networks, as well as other traits associated with managing uncertainty such as motivation or drive, and traditional characteristics such as the willingness to embracing risk. The determinants of becoming self-employed in China, particularly in urban areas, are yet to be well understood despite the growing importance of the de novo private sector. Studies of self-employment include analyses by Wu (2002), Zhang et al. (2006) and Mohapatra, Rozelle & Goodhue (2007) as well as a survey of entrepreneurs by Djankov, Qian, Roland & Zhuravskaya (2006). The study of rural China by Mohapatra et al. (2007) emphasizes education as the key determinant of rural farmers leaving the agricultural sector and moving into self-employment while Wu (2002) finds that education deters self-employment in urban areas. As with most issues in China, there are significant urban–rural differences. Zhang et al. (2006) and Djankov et al. (2006) concur that entrepreneurship is more likely if the entrepreneur has friends or family who were entrepreneurs. In the Djankov et al. (2006) study, the most robust determinant of entrepreneurship was knowing people who had tried entrepreneurship. This is consistent with the work on the importance of social networks. The original data used this paper, with measures of social networks, motivation and attitudes, can to build upon these findings. Therefore, China is an appropriate economy to study the rise of self-employment and a segment of the rapidly developing privately owned firms since it is transition economy and developing country which has a significant lack of formal institutions in the areas of property rights and other features crucial for private economic activity, such as well functioning credit markets, certainty in contracting and investment protection. Moreover, China has traditionally had a cultural and historical emphasis on inter-personal relationships or guanxi, which informs business dealings both within and outside of China. This suggests that networking is possibly an important factor in determining non-state sector development in transitioning China.1 Section 2 examines the factors affecting self-employment in China and setting out the hypothesis regarding the importance of social networks. Section 3 presents the data, followed by a section on the estimation approach of the paper. Section 5 discusses the results. Section 6 summarizes the findings and concludes.

This paper investigated self-employment and social networks amongst two groups of the self-employed (wholly and secondarily self-employed) in urban China, and also men and women separately in each of the groupings. A sub-sample of those who had experienced unemployment was also investigated. First, socio-economic background and attitudes of the self-employed were found to be similar to those of the wage employed, but personal traits and incomes differed. The gender gap that has become evident in the wage employment market also characterizes the self-employed. Women who are self-employed make around half of that of men. Next, multinomial logit regressions were estimated to analyze the determinants of self-employment and investigate whether social networks were a significant factor, holding all other observable entrepreneurial traits constant. Social networks are consistently significant as a determinant of self-employment except for those who are self-employed as a second job and for women who had experienced unemployment and then started a business. For that group of women, social networks reduced the probability that they would become self-employed after experiencing unemployment, suggesting that the nature of their networks is perhaps to generate information that could help them find another job rather than striking out on their own. For men who have experienced unemployment though, their social networks increase the probability of self-employment, possibly through helping them obtain the necessary permissions, credit, distributional or production channels. This is similar to the main sample of the wholly self-employed where social networks increase the prospects of starting a business. For women who have no experience of unemployment, their social networks could have prevented them from being laid-off and served as conduits for their starting their own businesses. This is similar to men and dissimilar to women who lost their jobs previously. Spousal characteristics further suggest that family businesses are a strong factor in the burgeoning de novo private sector. The growth of the non-state sector during China's gradual transition has undoubtedly been a driver of economic growth. Going into business for oneself plays an important role in the development of the non-state sector. The decision to become self-employed could be informed by institutional and personal as well as socio-economic factors. Institutional barriers to starting a business include credit constraints, lack of access to supply networks, and regulatory complexity. Having a social network can help ease these constraints. Networks of relatives, friends, etc. could ease credit constraints, improve access to supply and distribution networks, and gain the necessary licenses to operate. Family businesses are not atypical. Becoming self-employed is also likely to be associated with personal traits, such as attitude toward risk, spousal traits, and socio-economic background, such as parents' occupation that feeds into such motivations. Therefore, the self-employed in urban China are likely to have larger social networks and there is a relationship between starting a business and having the network to do so. Those who work for themselves on the side are not affected by their networks. The evidence generally suggests that relationships are important in starting a business in China during a time when the legal and financial contexts are imperfect and uncertain, but economic development is rapid. The finding that social networks negatively influence women's decision to become self-employed after experiencing unemployment is a surprising one. Social networks could help them gain wage employment in that instance and deter them from entering into self-employment. Women who have not suffered unemployment may have networks that are more similar to men and therefore use it in a like fashion to start a business. It is evident that female entrepreneurs are indeed different from male ones and this paper has only shed some preliminary light on them. The main finding of this paper is that social networks facilitate self-employment in urban China, but not for those who only undertake self-employment as a second job. The reasons for their influence could have to do with easing credit and institutional constraints to make up for an imperfect banking/financial system as well as opaque regulatory environment. The insecurity of property rights in a country would also cause the self-employed to rely on relational-based contracting so that disputes can be resolved via trust rather than the courts. With better protection of property as evidenced by the 2007 Property Law which granted equal protection to private and public property, the reliance on social networks as an enabler of self-employment should decline. However, China's marketization process is yet incomplete and it will for some time have an imperfect contracting regime and credit system which suggests the continuing use of social networks. Indeed, even as China's environment for starting a business improves with economic development, social networks are likely to retain its importance. This can be seen in terms of the reliance on relationships of the overseas Chinese diaspora in countries with very good legal systems such as the United States, as networks can still reduce transaction costs and help businesses avoid what is often an expensive and lengthy legal process to resolve disputes.