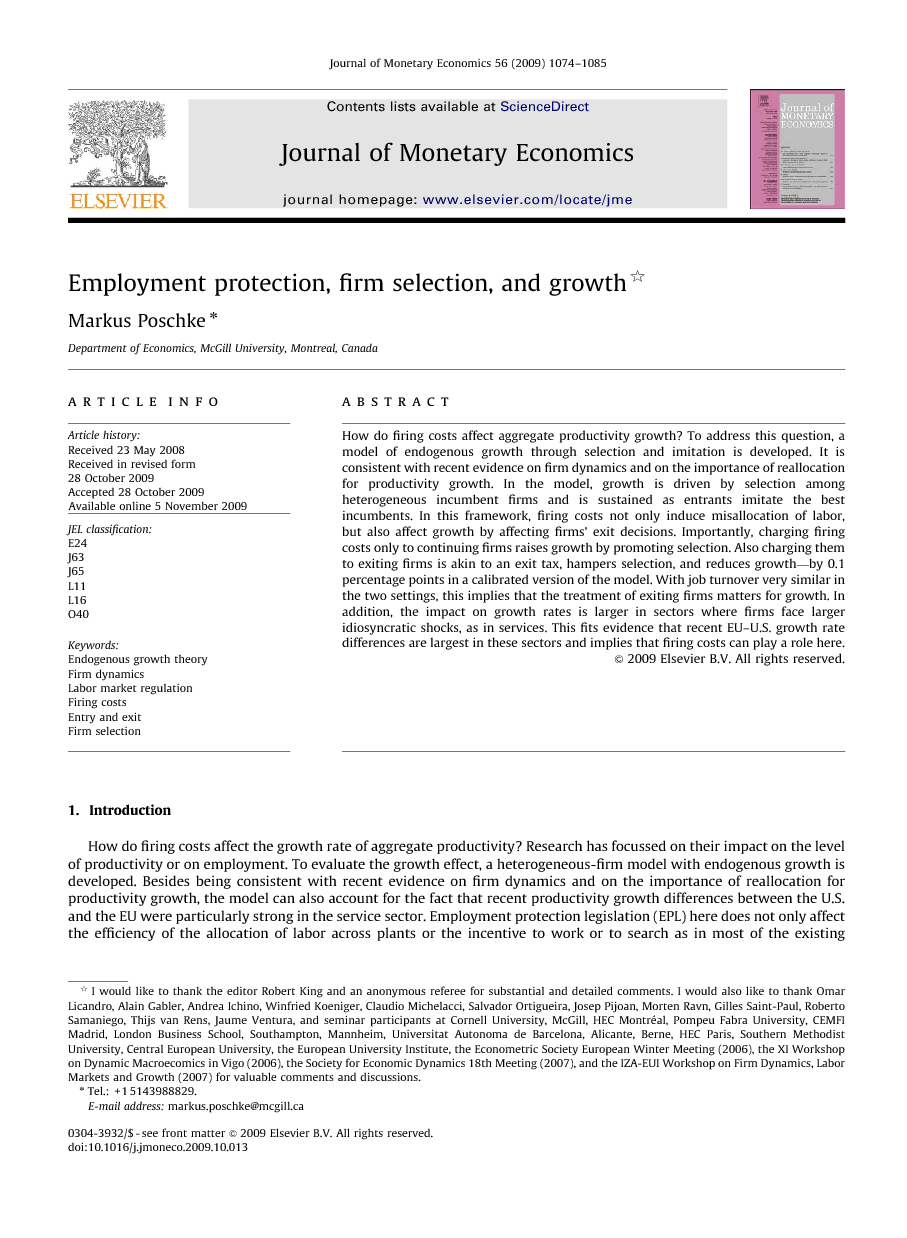 How do firing costs affect aggregate productivity growth? To address this question, a model of endogenous growth through selection and imitation is developed. It is consistent with recent evidence on firm dynamics and on the importance of reallocation for productivity growth. In the model, growth is driven by selection among heterogeneous incumbent firms and is sustained as entrants imitate the best incumbents. In this framework, firing costs not only induce misallocation of labor, but also affect growth by affecting firms’ exit decisions. Importantly, charging firing costs only to continuing firms raises growth by promoting selection. Also charging them to exiting firms is akin to an exit tax, hampers selection, and reduces growth—by 0.1 percentage points in a calibrated version of the model. With job turnover very similar in the two settings, this implies that the treatment of exiting firms matters for growth. In addition, the impact on growth rates is larger in sectors where firms face larger idiosyncratic shocks, as in services. This fits evidence that recent EU–U.S. growth rate differences are largest in these sectors and implies that firing costs can play a role here.

This paper has analyzed the effect of firing costs on productivity growth, a topic that despite its evident importance has received much less attention than their impact on employment or on the level of productivity. To perform the analysis, a model of growth through selection and experimentation has been developed, taking into account recent evidence on firm dynamics, particularly on the importance of job turnover, firm heterogeneity, and the contribution of entry and exit to aggregate productivity growth. In the model, growth occurs endogenously due to selection among incumbents and due to imitation by entrants. In a nutshell, selection eliminates the worst active firms. Modeling mean productivity of entrants as a constant fraction of the productivity frontier, the model economy grows through rightward shifts of the firm productivity distribution. The more variable the fate of firms in the economy, the stronger the selection mechanism, and the faster growth. In this setting, firing costs do not only induce a misallocation of labor, reduce firm value and discourage entry as in other models, but also discourage exit of low-productivity firms. This congests the selection process and slows down growth. Their effect is stronger the more variable firms’ productivity is. Through this mechanism, the model matches the fact that in recent years, productivity growth differences between the EU and the U.S. were largest in the high-turbulence service sector. Modeling aggregate productivity growth in accordance with the evidence on firm dynamics and matching this fact is the first contribution of the paper. The second contribution lies in the analysis of the treatment of exiting firms. Exempting exiting firms from firing cost speeds up the exit of inefficient firms and thereby growth. Since job turnover is not much higher than without the exemption, it is likely that the cost to growth from charging firing costs to exiting firms exceeds any (here unmodeled) benefits of slightly reducing job turnover. The treatment of exiting firms is an important factor neglected by empirical work on EPL and growth, a fact that may explain weak results in that literature.