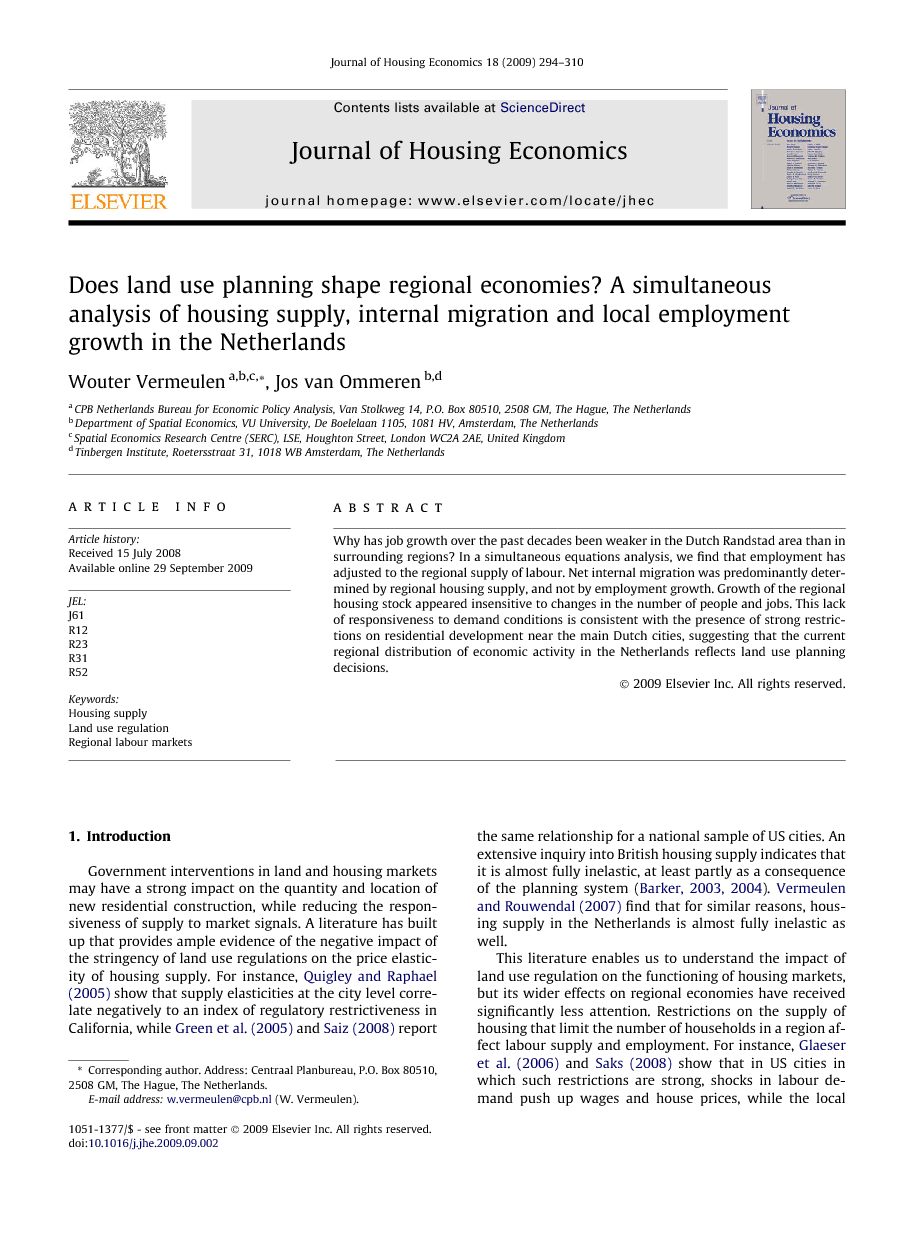 Why has job growth over the past decades been weaker in the Dutch Randstad area than in surrounding regions? In a simultaneous equations analysis, we find that employment has adjusted to the regional supply of labour. Net internal migration was predominantly determined by regional housing supply, and not by employment growth. Growth of the regional housing stock appeared insensitive to changes in the number of people and jobs. This lack of responsiveness to demand conditions is consistent with the presence of strong restrictions on residential development near the main Dutch cities, suggesting that the current regional distribution of economic activity in the Netherlands reflects land use planning decisions.

Our empirical analysis identifies housing supply as a driving force behind regional development in the Netherlands. Although a strong correlation exists between regional growth of the number of houses and residents, housing supply turns out to be hardly responsive to either population or employment growth once the endogeneity of these variables is taken into account. In contrast, net internal migration appears to be highly sensitive to changes in the regional housing stock, while a growing number of jobs does not have statistically significant impact. We find that the long-run relationship between the number of people and jobs in a region is mainly restored through changes in employment growth. So regional housing supply induces population growth and in the long run, this increase in labour supply is matched by demand. The prominence of housing supply in our findings may appear surprising as, with the notable exception of Greenwood (1980) and Greenwood and Stock (1990), it is ignored in most of the empirical literature on the interdependency of local population and employment growth. However, as recently observed by Glaeser et al. (2006) and Saks (2008), the response of local labour supply to shifts in demand depends crucially on the price elasticity of housing supply. These authors show that in US cities where new construction is restricted by severe land use controls, shifts in labour demand push up house prices and wages, but employment is largely unaffected. It follows that in such cities, employment is basically determined by the size of the housing stock. Since housing supply conditions are highly restrictive in the Netherlands as well, our findings are perfectly in line with this work. Our results are also consistent with strands of the literature on internal migration and regional labour markets. Notably, the importance of housing market conditions for internal migration has been reported in various earlier studies (see Gabriel et al., 1992, for the US, Jackman and Savouri, 1992 and Cameron et al., 2006, for the UK, and Antolin and Bover, 1997, for Spain). The absence of any significant effect of employment growth on internal migration in our analysis is in line with the mixed performance of regional wage and unemployment variables in the literature (cf. Greenwood, 1993). Furthermore, labour is known to be rather immobile between regions, in particular in most European countries (cf. Eichengreen, 1993, Decressin and Fatas, 1995 and OECD, 2005). To the extent that regional labour supply adjusts to demand through internal migration, such findings suggest that the wage elasticity of regional labour supply is limited. On the other hand, the regional demand for labour should be elastic with respect to wages, in particular in a small and open economy such as the Netherlands. Although short-run elasticities are generally found to be below unity (Bartik, 1991), it seems plausible that the long-run employment response to a shift in wages is substantially larger (cf. Muth, 1990). If regional labour demand is much more sensitive to wages than supply, one should expect to find that employment adjusts to the regional distribution of people rather than the other way around. Unfortunately, the demand and supply elasticities in labour and housing markets that enable us to interpret the results in terms of underlying economic behaviour could not be estimated, because regional house prices and wages were not available.36 As a consequence of our choice to analyse annual time series spanning three decades at the regional level, the range of other explanatory variables at our disposal was also limited. While this has made the identification of causal relationships challenging, with the limited strength of instruments being a particular reason for caution in the interpretation of results, this disadvantage of our empirical strategy has been traded off against the possibility to analyse both short and long-run effects in the interdependency of our endogenous variables. Furthermore, the regional panel structure of the data has allowed us to control fully for national trends as well as for all time-invariant regional determinants of growth rates of housing, population and employment. In interpreting our results, a few other caveats should also be born in mind. In the first place, labour demand and supply are heterogeneous. Although aggregate employment has been found to adjust to the regional supply of labour, the inclination to follow jobs is likely to rise with educational attainment. If housing supply restricts the total number of workers in a booming region, higher educated workers may outbid the lower educated for housing. The existence of significant differences in educational attainment between regions in the Netherlands supports this view. In the second place, it should be realised that our results have been obtained in a setting which is characterised by restrictive land use regulation and generally tight housing market conditions. It makes sense to expect that new construction attracts workers and jobs in a region where housing supply is highly restricted. However, this finding should not be taken as a recipe for growth enhancement in lagging peripheral regions, where the size of the housing stock by and large reflects demand conditions. So why has job growth over the past decades been weaker in the Dutch Randstad area than in surrounding regions? While our analysis points to the role of lagging housing supply, it does not provide explicit evidence of the role of land use planning. However, as discussed in the introduction to this paper, there is ample evidence that land use regulation has imposed binding and significant constraints on residential development, particularly in this region. If planning restrictions would have been less severe, more houses would have been built here and our analysis suggests that in turn, this would have led to more people and jobs.37 Through foregone economies of agglomeration, these restrictions have probably left their marks on productivity too. In other words, there may be substance to the OECD claim that housing market institutions partly explain lagging labour productivity in the Randstad area.