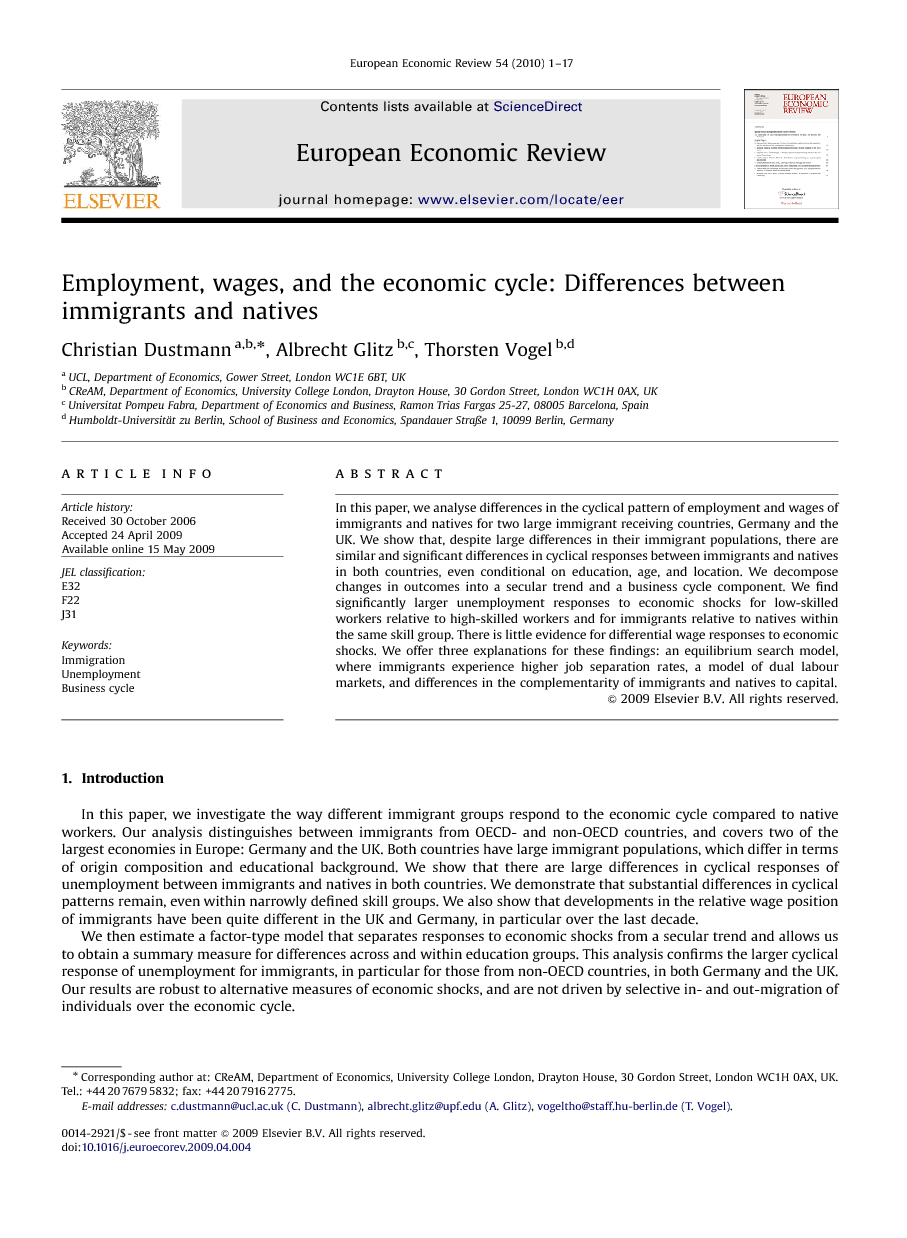 In this paper, we analyse differences in the cyclical pattern of employment and wages of immigrants and natives for two large immigrant receiving countries, Germany and the UK. We show that, despite large differences in their immigrant populations, there are similar and significant differences in cyclical responses between immigrants and natives in both countries, even conditional on education, age, and location. We decompose changes in outcomes into a secular trend and a business cycle component. We find significantly larger unemployment responses to economic shocks for low-skilled workers relative to high-skilled workers and for immigrants relative to natives within the same skill group. There is little evidence for differential wage responses to economic shocks. We offer three explanations for these findings: an equilibrium search model, where immigrants experience higher job separation rates, a model of dual labour markets, and differences in the complementarity of immigrants and natives to capital.

In this paper, we investigate the way different immigrant groups respond to the economic cycle compared to native workers. Our analysis distinguishes between immigrants from OECD- and non-OECD countries, and covers two of the largest economies in Europe: Germany and the UK. Both countries have large immigrant populations, which differ in terms of origin composition and educational background. We show that there are large differences in cyclical responses of unemployment between immigrants and natives in both countries. We demonstrate that substantial differences in cyclical patterns remain, even within narrowly defined skill groups. We also show that developments in the relative wage position of immigrants have been quite different in the UK and Germany, in particular over the last decade. We then estimate a factor-type model that separates responses to economic shocks from a secular trend and allows us to obtain a summary measure for differences across and within education groups. This analysis confirms the larger cyclical response of unemployment for immigrants, in particular for those from non-OECD countries, in both Germany and the UK. Our results are robust to alternative measures of economic shocks, and are not driven by selective in- and out-migration of individuals over the economic cycle. We provide a number of possible explanations for our findings. First, we consider an equilibrium search model of the type set up by Diamond (1982), Mortensen (1982), and Pissarides (1985). In this model, differences in the hiring intensity between groups in up- and downturns occur if job separation rates differ. We provide evidence for differences in job separation rates between immigrants and natives, even within education groups. Second, we consider a dual labour market. As a third explanation, we investigate the possibility of differences in capital–labour complementarities between groups. We conclude that each of these explanations may contribute to the pattern we observe in our data. The structure of the paper is as follows. In Section 2, we provide some background information about immigration to Germany and the UK, and economic outcomes and composition of immigrants in the two countries. We then discuss the data we use for our analysis. Section 3 illustrates economic outcomes of different groups of immigrants in both Germany and the UK over the economic cycle, compares these to outcomes of native workers, and investigates how much of these differences are due to differences in education, age, and regional allocation. Section 4 estimates a model that summarises these differences in a set of parameters that allows comparisons between groups and across countries. Section 5 hypothesises about possible explanations for our empirical findings. The differential response of immigrants even within the same skill groups, so far largely overlooked in the economic literature (a notable exception is recent work by Barth et al., 2004 and Barth et al., 2006), has important implications for immigration policy as well as for the analysis of the economic impact of immigration and the adaptation process of immigrant groups in their host countries. We discuss these in Section 5.

Our results suggest larger unemployment responses to economic shocks for immigrants relative to natives within skill groups. These differences are particularly pronounced for non-OECD immigrants, and evident for both Germany and the UK, despite their rather different immigrant populations. We find little evidence in both countries that wage responses of immigrants to shocks are different from those of natives within skill groups. We show that our results are not driven by selective in- and out-migration of immigrants, or by the way we identify region-specific shocks. We offer three explanations for these findings. First, within an equilibrium search model, immigrants’ unemployment may react stronger to the economic cycle if they are experiencing higher job separation rates. We show that job survival rates of immigrants are systematically lower and separation rates higher, even within skill groups. Second, within a model of dual labour markets, immigrants could be overrepresented in the secondary sector due to their higher job separation rates. Again, this would imply higher volatility in their unemployment experience over the economic cycle. And finally, if immigrants are less complementary to capital than natives and wages are somewhat sticky, this would also lead to the cyclical response we observe. Compatible with this, we demonstrate that immigrants in Germany are (conditional on education) less likely to work in jobs that use computers, more likely to perform tasks that are routine, and less likely to perform tasks that are analytical. Our analysis has implications for other areas of research on immigration. In the literature on the economic assimilation of immigrants,9 identification of cohort effects is often achieved by assuming that immigrants and natives react to macro shocks in the same way (see e.g. Borjas, 1999). In two recent papers, Barth et al., 2004 and Barth et al., 2006 point out that differences in the response to macroeconomic conditions between immigrants and natives invalidate this assumption. As an alternative identification strategy, they propose to parameterise time effects as a function of local labour market conditions and allow these to vary between immigrants and natives. The findings in this paper support their approach. Our analysis adds a further concern. The strong cyclical pattern in the difference in unemployment rates between immigrants and natives within skill groups may lead to differential selection into work over the economic cycle. To test this we use our German data for the period 1982–2001 and regress separately for each nationality/gender group log wages on the interaction of educational attainment and an indicator variable that takes the value one if the individual will be unemployed in the next period. Additional controls include age and age squared, educational attainment, and a set of year and region fixed effects. The results show that those workers who become unemployed in the next period earn around 15–25 percent lower wages, compared to workers who remain in employment, which points towards negative selection into unemployment. As immigrants react stronger to adverse business cycle shocks, those immigrants in work in economic downturns may be more positively selected, compared to natives. This may lead to a bias in immigrants’ estimated assimilation profiles.10 The sign and magnitude of the bias will depend on the cyclicality of the period that is considered, and the differences in response of the individual groups. The results in this paper also contribute to the more recent literature on the impact of immigration on wages of native workers. Ottaviano and Peri (2006) argue that, even within age and education cells, immigrants and natives may not be perfect substitutes, as is typically assumed. They test this hypothesis estimating the parameters of a three-level CES production function and find indeed evidence for imperfect substitutability of immigrants and natives within quite narrowly defined age and education cells. Card (2009), Manacorda et al. (2006) and D’Amuri et al. (2008) come to similar conclusions in separate analyses for the US, the UK and Germany. Our findings of different unemployment responses of immigrants and natives over the economic cycle point in the same direction and suggest that within the same skill group, immigrants and natives may not be perfect substitutes.