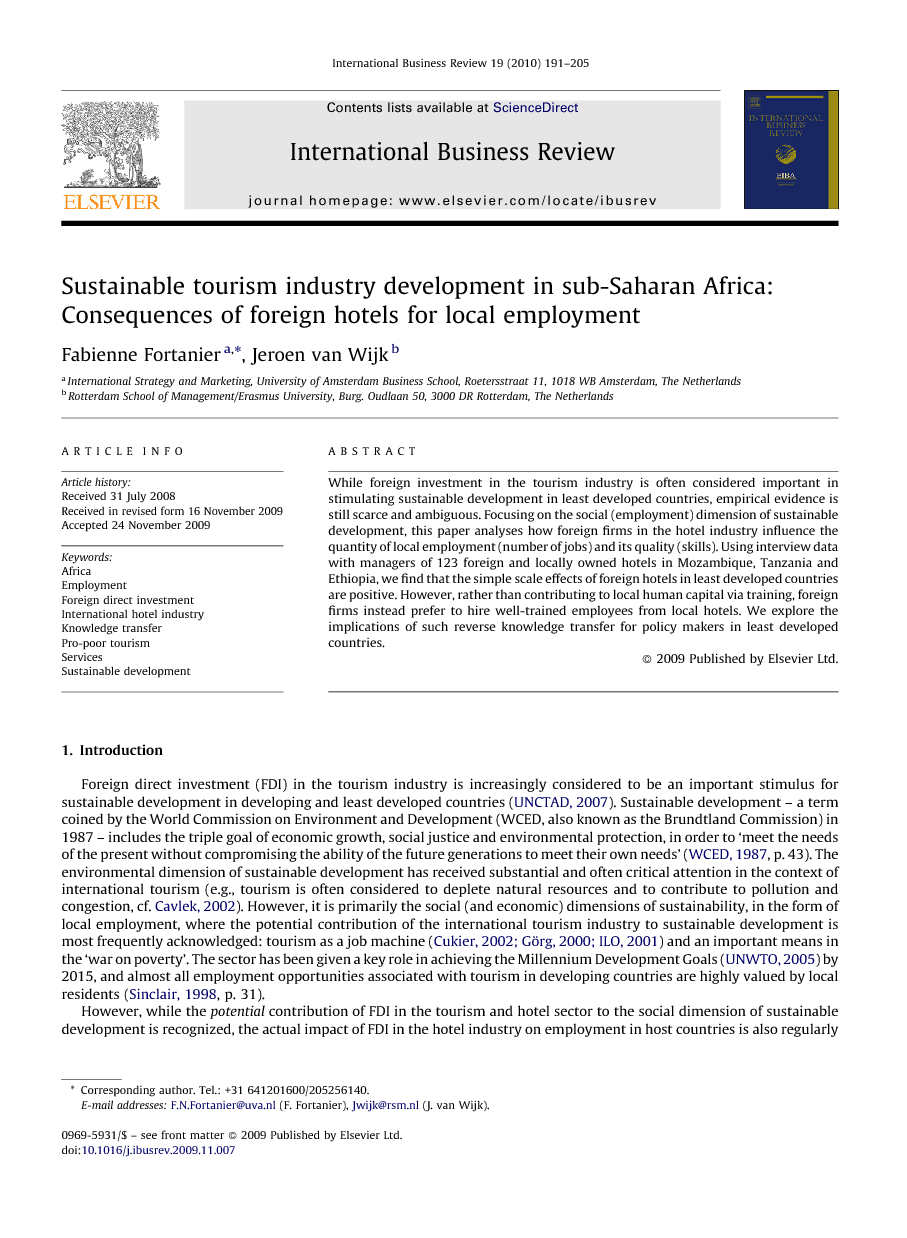 While foreign investment in the tourism industry is often considered important in stimulating sustainable development in least developed countries, empirical evidence is still scarce and ambiguous. Focusing on the social (employment) dimension of sustainable development, this paper analyses how foreign firms in the hotel industry influence the quantity of local employment (number of jobs) and its quality (skills). Using interview data with managers of 123 foreign and locally owned hotels in Mozambique, Tanzania and Ethiopia, we find that the simple scale effects of foreign hotels in least developed countries are positive. However, rather than contributing to local human capital via training, foreign firms instead prefer to hire well-trained employees from local hotels. We explore the implications of such reverse knowledge transfer for policy makers in least developed countries.

Foreign direct investment (FDI) in the tourism industry is increasingly considered to be an important stimulus for sustainable development in developing and least developed countries (UNCTAD, 2007). Sustainable development – a term coined by the World Commission on Environment and Development (WCED, also known as the Brundtland Commission) in 1987 – includes the triple goal of economic growth, social justice and environmental protection, in order to ‘meet the needs of the present without compromising the ability of the future generations to meet their own needs’ (WCED, 1987, p. 43). The environmental dimension of sustainable development has received substantial and often critical attention in the context of international tourism (e.g., tourism is often considered to deplete natural resources and to contribute to pollution and congestion, cf. Cavlek, 2002). However, it is primarily the social (and economic) dimensions of sustainability, in the form of local employment, where the potential contribution of the international tourism industry to sustainable development is most frequently acknowledged: tourism as a job machine (Cukier, 2002, Görg, 2000 and ILO, 2001) and an important means in the ‘war on poverty’. The sector has been given a key role in achieving the Millennium Development Goals (UNWTO, 2005) by 2015, and almost all employment opportunities associated with tourism in developing countries are highly valued by local residents (Sinclair, 1998, p. 31). However, while the potential contribution of FDI in the tourism and hotel sector to the social dimension of sustainable development is recognized, the actual impact of FDI in the hotel industry on employment in host countries is also regularly questioned. Employment may be seasonal and involve menial and servile rather than skilled jobs, and wages are low ( Baum, 1993, Farver, 1984 and Young, 1973). For example, the International Labour Organization (ILO) established that wages at hotel chains are on average 20% below those in other economic sectors (ILO, 2001, p. 121). Moreover, the international hotels in developing countries are usually managed by expatriates, which would strengthen foreign dominance in the tourist sector, and reproduce rather than change existing power relations and inequality (Mowforth & Munt, 2003). Overall, empirical evidence concerning the consequences of FDI in the hotel industry is both scant and ambiguous (UNCTAD, 2007). The uncertainty about effects of the international hotel business in developing countries reflects the broader academic debate concerning the social and economic development consequences of FDI for host countries. Literature reviews by, e.g., Caves (1996) and Meyer (2004) indicate that despite the extensive research in this area, conclusive answers on the extent to which foreign direct investment benefits economic growth and employment in host countries have not yet been given. Recent studies suggest that the effects of FDI are not only dependent on host country absorptive capacity (cf. Alfaro et al., 2004, Balasubramanyam et al., 1996, Borensztein et al., 1998 and Rodrik, 1999), but also on the characteristics of foreign investors (Egelhoff et al., 2000, Fortanier, 2007, Kearns and Ruane, 2001 and Takii, 2004). However, the exact way in which the various ownership advantages of foreign investors affect employment still requires more systematic study, especially in the services sector. Hence, the two main research questions of this paper are: (1) what are the consequences of the presence of foreign-owned hotels for local employment, both quantitatively (number of jobs) and qualitatively (training and skills transfer), and (2) to what extent can differences in these consequences be observed across foreign hotels with different characteristics? We contribute to the existing literature and to our understanding of how FDI affects employment in host countries by developing a set of hypotheses on how heterogeneity in selected ownership advantages of foreign firms may result in different consequences for employment, and by testing these hypotheses empirically using data from three countries from a region where the problems of development are strongest, but where International Business research remains scarce: those in sub-Sahara Africa. We use detailed interview data for 123 hotels in three sub-Saharan African countries: Mozambique, Tanzania, and Ethiopia. The use of interview data and the focus on an individual service sector (i.e., hotels) will allow us to explore in detail the employment consequences of international business in services. The number of observations is substantial enough for some basic quantitative analysis, while we also qualitatively explore the reasons behind certain decisions and strategies. In the remainder of this paper, we first review the literature on the local employment effects of multinationals, with a special focus on the hotel industry in Africa. We subsequently develop several hypotheses on how hotel characteristics including class and the use of expatriate managers may influence the consequences of these hotels for employment. The methodological section explains the data collection and research design, with specific attention to the particulars of conducting empirical research in sub-Saharan Africa. Section 5 presents both the quantitative and qualitative empirical results, while Section 6 discusses and concludes.