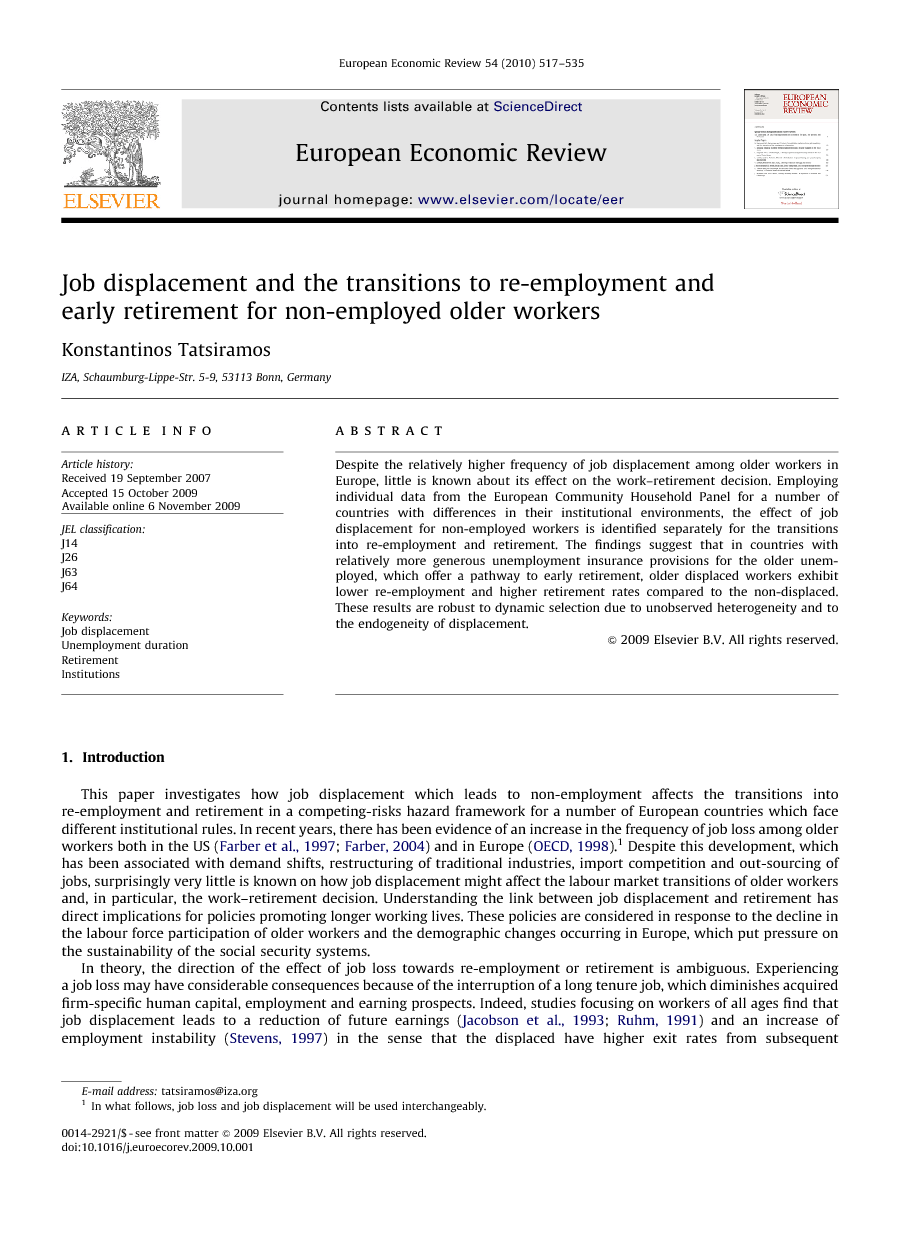 Despite the relatively higher frequency of job displacement among older workers in Europe, little is known about its effect on the work–retirement decision. Employing individual data from the European Community Household Panel for a number of countries with differences in their institutional environments, the effect of job displacement for non-employed workers is identified separately for the transitions into re-employment and retirement. The findings suggest that in countries with relatively more generous unemployment insurance provisions for the older unemployed, which offer a pathway to early retirement, older displaced workers exhibit lower re-employment and higher retirement rates compared to the non-displaced. These results are robust to dynamic selection due to unobserved heterogeneity and to the endogeneity of displacement.

This paper investigates how job displacement which leads to non-employment affects the transitions into re-employment and retirement in a competing-risks hazard framework for a number of European countries which face different institutional rules. In recent years, there has been evidence of an increase in the frequency of job loss among older workers both in the US (Farber et al., 1997; Farber, 2004) and in Europe (OECD, 1998).1 Despite this development, which has been associated with demand shifts, restructuring of traditional industries, import competition and out-sourcing of jobs, surprisingly very little is known on how job displacement might affect the labour market transitions of older workers and, in particular, the work–retirement decision. Understanding the link between job displacement and retirement has direct implications for policies promoting longer working lives. These policies are considered in response to the decline in the labour force participation of older workers and the demographic changes occurring in Europe, which put pressure on the sustainability of the social security systems. In theory, the direction of the effect of job loss towards re-employment or retirement is ambiguous. Experiencing a job loss may have considerable consequences because of the interruption of a long tenure job, which diminishes acquired firm-specific human capital, employment and earning prospects. Indeed, studies focusing on workers of all ages find that job displacement leads to a reduction of future earnings (Jacobson et al., 1993; Ruhm, 1991) and an increase of employment instability (Stevens, 1997) in the sense that the displaced have higher exit rates from subsequent employment.2 Although the unemployment rate among workers 45 to 64 years old is lower than the overall rate in most OECD countries, the incidence of long-term unemployment is significantly higher (OECD, 1998), which suggests a lower mobility of older workers who experience unemployment. Considering retirement as a distinct labour market state allows for the distinction between two competing explanations for the incidence of long-term unemployment among older workers. That is, unemployment persistence might exist due to (1) difficulties in being re-employed based on poor employment prospects, or (2) disincentives of being re-employed. In a number of countries, the combination of extended unemployment benefit periods with early retirement schemes available for the older workers might affect their decisions by making retirement more attractive (Duval, 2003).3 However, job displacement might also affect the work–retirement decision in the opposite direction and reduce wealth and income, which might lead to an extension of the working life. Focusing on the transitions between non-employment and employment following a late-career job loss in the US, Chan and Stevens, 1999 and Chan and Stevens, 2001 find that job loss for men leads to longer labour force participation, which reflects the need to rebuild diminished savings for retirement. For women, the reduced earnings due to a job loss reduce the incentives to work. Using Austrian administrative data, Ichino et al. (2007) find that after a plant closure the old initially have lower re-employment probabilities compared to prime-age workers, but later they catch-up. The analysis in this paper has three novel and important features. The first is the focus on the distinction between transitions towards re-employment and retirement for older workers in a number of countries (Germany, Italy, Spain and the UK), which differ in their institutions related to older unemployed, based on individual panel data from the European Community Household Panel (ECHP, 1994–2001). In this respect, the paper contributes to relatively recent literature on the incentive effects of unemployment related benefits for older workers. Heyma and van Ours (2005) find that the abolition of the requirement to actively search for a job beyond the age of 57.5 and the entitlement to unemployment benefits until the age of 65 has a large negative effect on the job finding rate in the Netherlands. Other studies have shown that increases in the entitlement period of unemployment benefits for older workers leads to declines in transition rates to employment in Germany (Hunt, 1995) and Austria (Lalive and Zweimüller, 2004), and provide a quantitatively important pathway into early retirement (Lalive, 2008). Kyyrä and Wilke (2007) evaluate the increase in the eligibility age from 53 to 55 of the unemployment insurance system in Finland, which allows unemployed workers to collect benefits up to a certain age limit and then retire. They find evidence of a large decrease in the inflow to unemployment and a large increase in the transition rate out of unemployment to employment. The second novel feature of the paper is the joint estimation of the effects of job displacement on the transitions into and out of subsequent employment, distinguishing between the short and long-run effects of displacement. That is, although displaced workers might be re-employed relatively fast, it is also the stability of the post-displacement employment which is important for the overall employment rate. In addition, dynamic selection is taken into account by allowing unobserved individual characteristics to be correlated across states. Finally, the paper addresses the endogeneity of displacement by extending the econometric model into a joint estimation of the selection process into displacement and the transitions into employment or retirement. Based on the “timing of the events” approach of Abbring and van den Berg (2003), the causal effect of displacement is identified by means of the variation from the multiple non-employment and employment spells which are observed for each individual. The rest of the paper is organised as follows. Section 2 contains a brief discussion of the institutional features related to unemployment insurance and retirement rules in each of the countries considered in this study. Section 3 describes the data and provides a non-parametric analysis of labour market transitions. Section 4 presents the econometric model and discusses identification and the way to address the endogeneity of displacement. Section 5 discusses the results of the effect of displacement on labour market transitions, and the Section 6 provides a summary of the findings and some policy conclusions.

The labour market situation of older workers has become extremely important in recent years. Population ageing is expected to increase the share of older workers in the labour force, and displacement due to technological progress and restructuring of traditional industries disproportionately affects older workers. Despite these developments, very little is known on how job displacement might affect the work–retirement decision. This paper investigates the effect of job displacement for workers 45–64 years old on the labour market transitions in Germany, Italy, Spain and the UK, based on individual data from the European Community Household Panel (ECHP, 1994–2001). To understand the factors and the incentives that determine the behaviour of older workers, a multivariate competing-risks hazard model is estimated which considers the transitions out of non-employment to re-employment and retirement. Explicitly modelling the transitions to retirement allows for the distinction between two competing explanations for the low re-employment rates of older displaced workers. That is, difficulties of being re-employed versus the lack of incentives of being re-employed if unemployment can be used as a pathway to early retirement. The model also distinguishes between the short and long term effects of job loss by analysing the transitions from the post-displacement employment state, taking into account correlated unobserved heterogeneity and the endogeneity of displacement. The results suggest that there are differential effects of displacement by age. In particular, non-employed workers in Germany and Spain are less likely to be re-employed if they are displaced when they are above 55 years old, and they are more likely to retire after 60 compared to the non-displaced. In contrast, the older displaced in Italy and the UK are less likely to exit to retirement. Institutional differences across countries might explain these findings. In particular, the relatively generous unemployment insurance for involuntary unemployed in Germany and Spain, with the possibility of retiring as early as 60 years old, might create incentives not to return to employment for those below the age of 60, and for an early withdrawal from the labour market for those above 60. In contrast, the lack of generous unemployment benefits and early retirement provisions for the displaced in countries such as Italy and the UK seem not to create incentives for an early exit from the labour force. Instead, displaced workers return to employment faster than the non-displaced, although this effect is not statistically significant. These findings suggest that the institutional environment is not only important, but it produces differential effects on the behaviour of older workers. This has important policy implications for the necessary reforms in response to the demographic changes occuring in Europe, and the pressures they place on the social security systems. In particular, policies aiming at increasing the employment rates of older workers should take into account the higher frequency of job displacement among older workers and the role of labour market institutions that affect their re-employment probabilities. Efforts to lower the incidence of job displacement among older workers and increase their re-employment probabilities are interrelated through the institutional design. As suggested by Blanchard and Tirole (2008) unemployment insurance and employment protection should be designed jointly rather than in isolation. Severance payments linked to the wage profile of workers can lower the incidence of job displacement, while unemployment insurance being conditional on looking for and accepting available jobs can simultaneously reduce the disincentive effect of unemployment insurance and thus increase job finding rates.