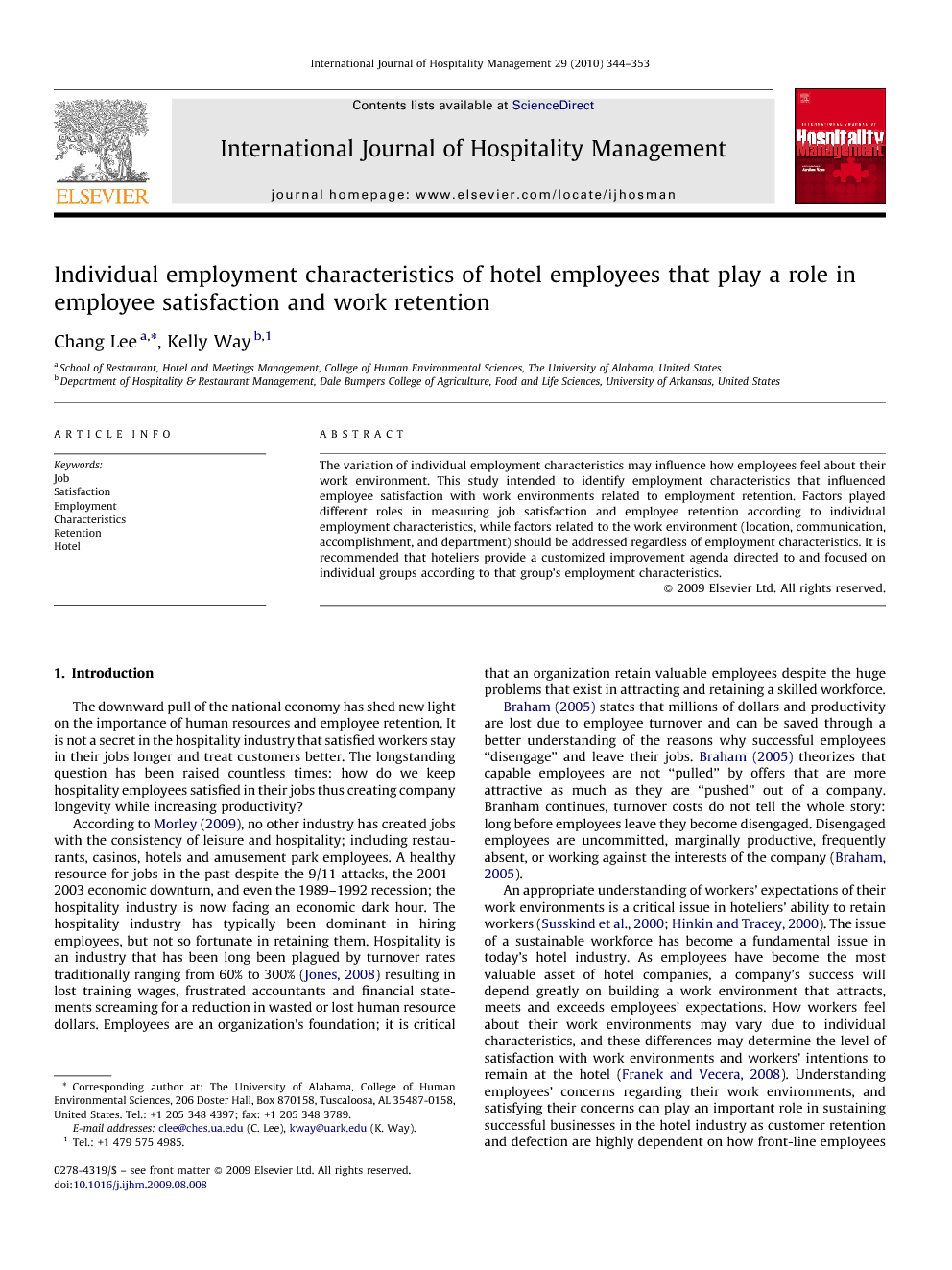 The downward pull of the national economy has shed new light on the importance of human resources and employee retention. It is not a secret in the hospitality industry that satisfied workers stay in their jobs longer and treat customers better. The longstanding question has been raised countless times: how do we keep hospitality employees satisfied in their jobs thus creating company longevity while increasing productivity? According to Morley (2009), no other industry has created jobs with the consistency of leisure and hospitality; including restaurants, casinos, hotels and amusement park employees. A healthy resource for jobs in the past despite the 9/11 attacks, the 2001–2003 economic downturn, and even the 1989–1992 recession; the hospitality industry is now facing an economic dark hour. The hospitality industry has typically been dominant in hiring employees, but not so fortunate in retaining them. Hospitality is an industry that has been long been plagued by turnover rates traditionally ranging from 60% to 300% (Jones, 2008) resulting in lost training wages, frustrated accountants and financial statements screaming for a reduction in wasted or lost human resource dollars. Employees are an organization's foundation; it is critical that an organization retain valuable employees despite the huge problems that exist in attracting and retaining a skilled workforce. Braham (2005) states that millions of dollars and productivity are lost due to employee turnover and can be saved through a better understanding of the reasons why successful employees “disengage” and leave their jobs. Braham (2005) theorizes that capable employees are not “pulled” by offers that are more attractive as much as they are “pushed” out of a company. Branham continues, turnover costs do not tell the whole story: long before employees leave they become disengaged. Disengaged employees are uncommitted, marginally productive, frequently absent, or working against the interests of the company (Braham, 2005). An appropriate understanding of workers’ expectations of their work environments is a critical issue in hoteliers’ ability to retain workers (Susskind et al., 2000 and Hinkin and Tracey, 2000). The issue of a sustainable workforce has become a fundamental issue in today's hotel industry. As employees have become the most valuable asset of hotel companies, a company's success will depend greatly on building a work environment that attracts, meets and exceeds employees’ expectations. How workers feel about their work environments may vary due to individual characteristics, and these differences may determine the level of satisfaction with work environments and workers’ intentions to remain at the hotel (Franek and Vecera, 2008). Understanding employees’ concerns regarding their work environments, and satisfying their concerns can play an important role in sustaining successful businesses in the hotel industry as customer retention and defection are highly dependent on how front-line employees deal with customers (Ford and Heaton, 2001), this is particularly true in the hotel industry. Previous research pertaining to job satisfaction factors in hospitality indicates that while money is a common factor (Hussain, 2008) there are several reasons why an establishment might lose staff. Much of the debate in previous research has focused on whether organizational commitment or job satisfaction has the greatest influence on employee turnover (Deery, 2008). Carbery et al. (2003) investigated the psychological contract, career expectations and managerial competencies on employees’ decisions to leave an organization. The authors found that a combination of demographic, human capital, psychological attributes and hotel characteristics contributed to employee turnover. Past research has also highlighted personal factors that focus on individual attributes and characteristics (Ellickson, 2002 and Hickson and Oshagbemi, 1999). In addition, a vast amount of research on the issue of job satisfaction has been documented based on demographic characteristics. Differences have been also found according to demographic characteristics, such as gender (Clark, 1997 and Wharton et al., 2000), age (Clark, 1997 and Eskildsen et al., 2003), education level (Clark, 1996 and Verhofstadt and Omey, 2007), income (Tang, 2007 and Clark et al., 2009), and tenure (Oshagbemi, 2000 and Kalleberg and Mastekaasa, 2001). However, issues encountered by individual employment characteristics have received little attention from scholars, primarily those whose research focuses on the hotel industry. Franek and Vecera (2008) indicated what is desired by one group of individuals is often different from what is desired by another group, which leads to the theory that employees become diversified according to employment characteristics. There is a need for a study that would provide information on job satisfaction factors based on employment characteristics, expressly among workers who have a variety of employment backgrounds. The purpose of this study is to identify whether individual job satisfaction factors have a relationship with an individual's overall job satisfaction and their level of intention to remain at their current work place according to employment characteristics by applying a newly modified job satisfaction scale.