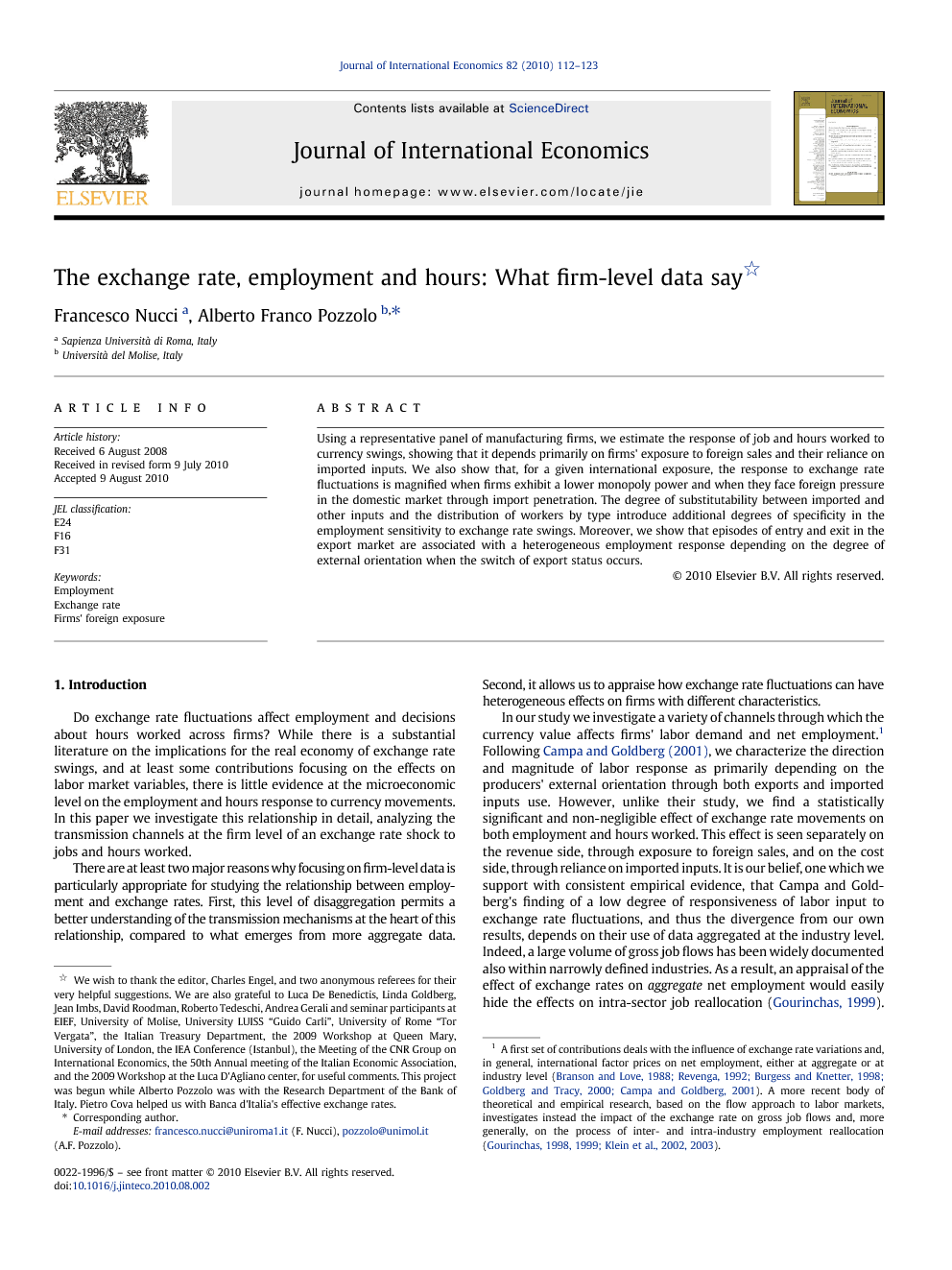 Using a representative panel of manufacturing firms, we estimate the response of job and hours worked to currency swings, showing that it depends primarily on firms' exposure to foreign sales and their reliance on imported inputs. We also show that, for a given international exposure, the response to exchange rate fluctuations is magnified when firms exhibit a lower monopoly power and when they face foreign pressure in the domestic market through import penetration. The degree of substitutability between imported and other inputs and the distribution of workers by type introduce additional degrees of specificity in the employment sensitivity to exchange rate swings. Moreover, we show that episodes of entry and exit in the export market are associated with a heterogeneous employment response depending on the degree of external orientation when the switch of export status occurs.

Do exchange rate fluctuations affect employment and decisions about hours worked across firms? While there is a substantial literature on the implications for the real economy of exchange rate swings, and at least some contributions focusing on the effects on labor market variables, there is little evidence at the microeconomic level on the employment and hours response to currency movements. In this paper we investigate this relationship in detail, analyzing the transmission channels at the firm level of an exchange rate shock to jobs and hours worked. There are at least two major reasons why focusing on firm-level data is particularly appropriate for studying the relationship between employment and exchange rates. First, this level of disaggregation permits a better understanding of the transmission mechanisms at the heart of this relationship, compared to what emerges from more aggregate data. Second, it allows us to appraise how exchange rate fluctuations can have heterogeneous effects on firms with different characteristics. In our study we investigate a variety of channels through which the currency value affects firms' labor demand and net employment.1 Following Campa and Goldberg (2001), we characterize the direction and magnitude of labor response as primarily depending on the producers' external orientation through both exports and imported inputs use. However, unlike their study, we find a statistically significant and non-negligible effect of exchange rate movements on both employment and hours worked. This effect is seen separately on the revenue side, through exposure to foreign sales, and on the cost side, through reliance on imported inputs. It is our belief, one which we support with consistent empirical evidence, that Campa and Goldberg's finding of a low degree of responsiveness of labor input to exchange rate fluctuations, and thus the divergence from our own results, depends on their use of data aggregated at the industry level. Indeed, a large volume of gross job flows has been widely documented also within narrowly defined industries. As a result, an appraisal of the effect of exchange rates on aggregate net employment would easily hide the effects on intra-sector job reallocation (Gourinchas, 1999). This is why we analyze the responsiveness of employment and hours worked to exchange rate fluctuations using firm-level panel data obtained from two high-quality sources: the Bank of Italy Survey of Investment in Manufacturing and the Company Accounts Data Service reports. The period we analyze is antecedent to the introduction of the single European currency and provides a very interesting case study, as Italy experienced significant exchange rate oscillations for a developed country, and at the same time was characterized by a high degree of firms' external orientation on both the revenue and cost sides. From a theoretical point of view, the different channels through which exchange rate variations affect firms' decisions on labor input can be easily described: after an exchange rate swing—let's say a depreciation—the more a firm relies on imported inputs, the larger the increase in its costs, the reduction in marginal profitability, and the ensuing drop in employment and hours worked. At the same time, in the aftermath of a depreciation the higher the firm's external sale exposure—i.e., the share of export revenues in total revenues—the larger the increase in its sales, in marginal profitability and therefore in the use of labor input. Moreover, for an imperfectly competitive firm, market power also affects the relationship. First, through the extent to which firms “pass-through” an exchange rate shock into export prices expressed in foreign currency. Second, through the price elasticity of demand. In the empirical analysis we also single out four additional firm-specific features that are potentially relevant for characterizing the exchange rate-labor input link at the firm level. First, we consider the degree of import penetration in the domestic market where the firm operates. In industries where imports account for a large share of total demand, firms with a higher dependence on domestic revenues are more exposed to foreign competition and therefore to the effects of exchange rate swings. In other words, if import penetration is high in a given industry, then a currency appreciation would severely reduce the competitiveness of domestic firms, even more so for firms with a high internal orientation of their sales. Second, we consider the degree of substitutability in the production function between imported and domestically produced inputs. If technological features or market constraints prevent imported inputs from being substituted with other inputs, then an exchange rate swing is likely to have a more pronounced impact on employment and hours worked, as firms profitability will be more deeply affected by the external shock. Further, we study whether the job and hours response to currency movements may depend on the distribution of workers by type of job within each firm (i.e., blue- vs. white-collar). This would clearly be the case if the firm's ability to adjust its labor force hinged on the type of workers it employs. Finally, and perhaps more importantly in light of the substantial microeconomic heterogeneity among firms in the decision to export (see, for example, Bernard et al., 2007), we investigate whether differences in firms' export status lead to a degree of specificity in the employment response. In so doing, we explicitly distinguish between firms that are currently exporting, non-exporters, and firms that switch export status, from non-exporter to exporter and from exporter to non-exporter. The remainder of the paper is organized as follows: Section 2 presents the theoretical background of our analysis and the empirical specification; Section 3 describes the data used; Section 4 documents the empirical results from the baseline specification, and Section 5 provides some further characterizations of the link between exchange rate and labor variables. Section 6 concludes. Appendix A presents a simple model providing a theoretical background for our empirical analysis.

We document a statistically significant effect of exchange rate variations on employment, hours worked and wages in a representative panel of Italian manufacturing firms. Our primary contribution lies in the investigation of a number of mechanisms at the firm level underlying this finding. We show that the degree of firms' foreign exposure on both the revenue and the cost side of the balance sheet determines the direction and size of the hours and job response to a currency swing. We estimate a time-varying response for each individual firm, reflecting the type and extent of this external orientation. Moreover, we show that, for a given degree of international exposure, the effects of exchange rate variations on employment and hours are magnified when the firm exhibits a low level of monopoly power, and that the response is stronger when firms face a significant foreign pressure on their domestic markets, through a high degree of import penetration. Other features, like the degree of substitutability in the production process between imported and other inputs or the type of workers employed in each firm are shown to introduce an additional degree of specificity in the employment reaction to the exchange rate. We also distinguish four cases to characterize different firms' export status and document that currency swings affect employment differently for exporting and non-exporting firms and also around export entry and exit episodes. This provides another dimension through which firms that export are different from those that do not. Overall, our results show that the aggregate relationship between the exchange rate and the level of employment hinges upon a wide set of characteristics of the firms operating in the manufacturing sector, and therefore currency fluctuations can have very heterogeneous effects at the firm level.