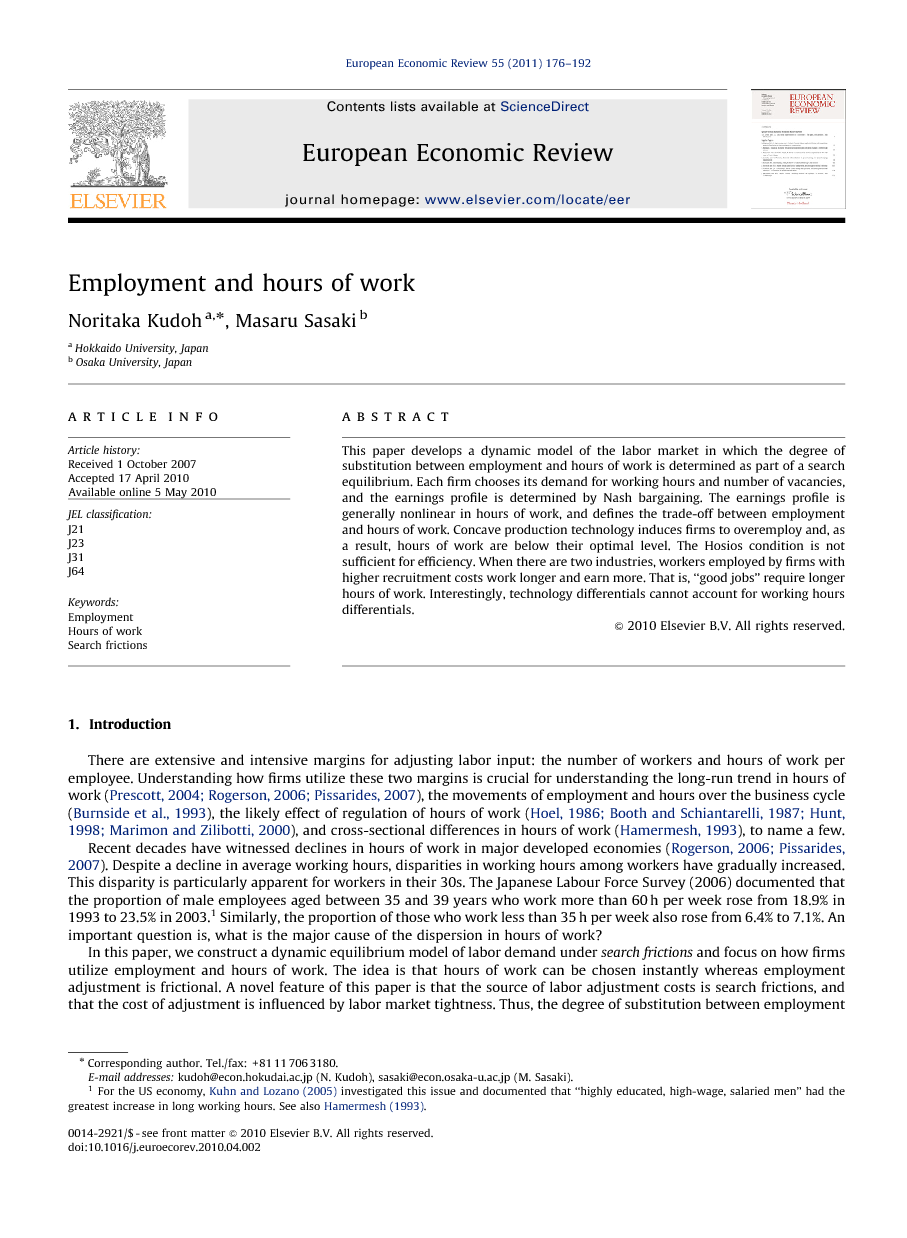 This paper develops a dynamic model of the labor market in which the degree of substitution between employment and hours of work is determined as part of a search equilibrium. Each firm chooses its demand for working hours and number of vacancies, and the earnings profile is determined by Nash bargaining. The earnings profile is generally nonlinear in hours of work, and defines the trade-off between employment and hours of work. Concave production technology induces firms to overemploy and, as a result, hours of work are below their optimal level. The Hosios condition is not sufficient for efficiency. When there are two industries, workers employed by firms with higher recruitment costs work longer and earn more. That is, “good jobs” require longer hours of work. Interestingly, technology differentials cannot account for working hours differentials.

In this paper, we analyzed the choice of employment and hours of work in a dynamic model with search frictions and bargaining. We showed that the bargaining outcome defines the earnings profile faced by the firm when it chooses its composition of employment and hours of work. We found that differences in recruitment costs are responsible for dispersion in hours of work, both within and across industries. In particular, “good jobs” (Acemoglu, 2001) pay better and require longer hours of work. Interestingly, technology differentials cannot account for working hours differentials. An advantage of our approach is that the earnings profile is derived as part of an equilibrium. Since the earnings profile reflects both the production technology and the worker's disutility from labor, hours of work may be determined either by the firm's value maximization or by a worker's labor-leisure choice. In addition, the derived earnings profile is consistent with the empirical labor supply curve. We found that, because of Smith's (1999) overemployment effect, hours of work are below their optimal level. Further, the Hosios condition is not sufficient for restoring efficiency. To restore efficiency under concave production technology, the firm must appropriate the whole bargaining surplus. This is a general feature of large firm models with search and bargaining. Investigation of the robustness of this inefficiency result in richer environments belongs to future search. A limitation of our approach is that the basic model with free entry cannot support an equilibrium with heterogeneous firms. We modified the basic model by replacing the free entry assumption with endogenous entry. Generally, one needs a richer model of multiple industries to account for the heterogeneity of job characteristics in equilibrium, and much of this line of research is left for future research. A possible direction is suggested by Cahuc et al. (2008). In this paper, we did not consider the heterogeneity of workers. Kuhn and Lozano (2005) documented that the observed increase in hours of work in the US was concentrated among skilled men. A deeper understanding of dispersion in hours of work requires a model that incorporates heterogeneous skills. It would be interesting to incorporate skilled and unskilled workers into the model of this paper to investigate whether it can explain Kuhn and Lozano's (2005) findings. In this paper, we focused on the steady state. However, the choice of employment and hours of work is particularly important for understanding business cycles. It is well documented that during a recession, firms cut employment rather than reduce hours of work sufficiently to maintain the level of employment. Since employment adjustment is costly, it seems rational to hoard labor during a recession if favorable business conditions return shortly (Burnside et al., 1993 and Bertola and Caballero, 1994). This suggests that firms that fire their employees face large and persistent negative shocks during a recession. A useful task for future work is to extend the model of this paper to explain the substitution between employment and hours of work over the business cycle.