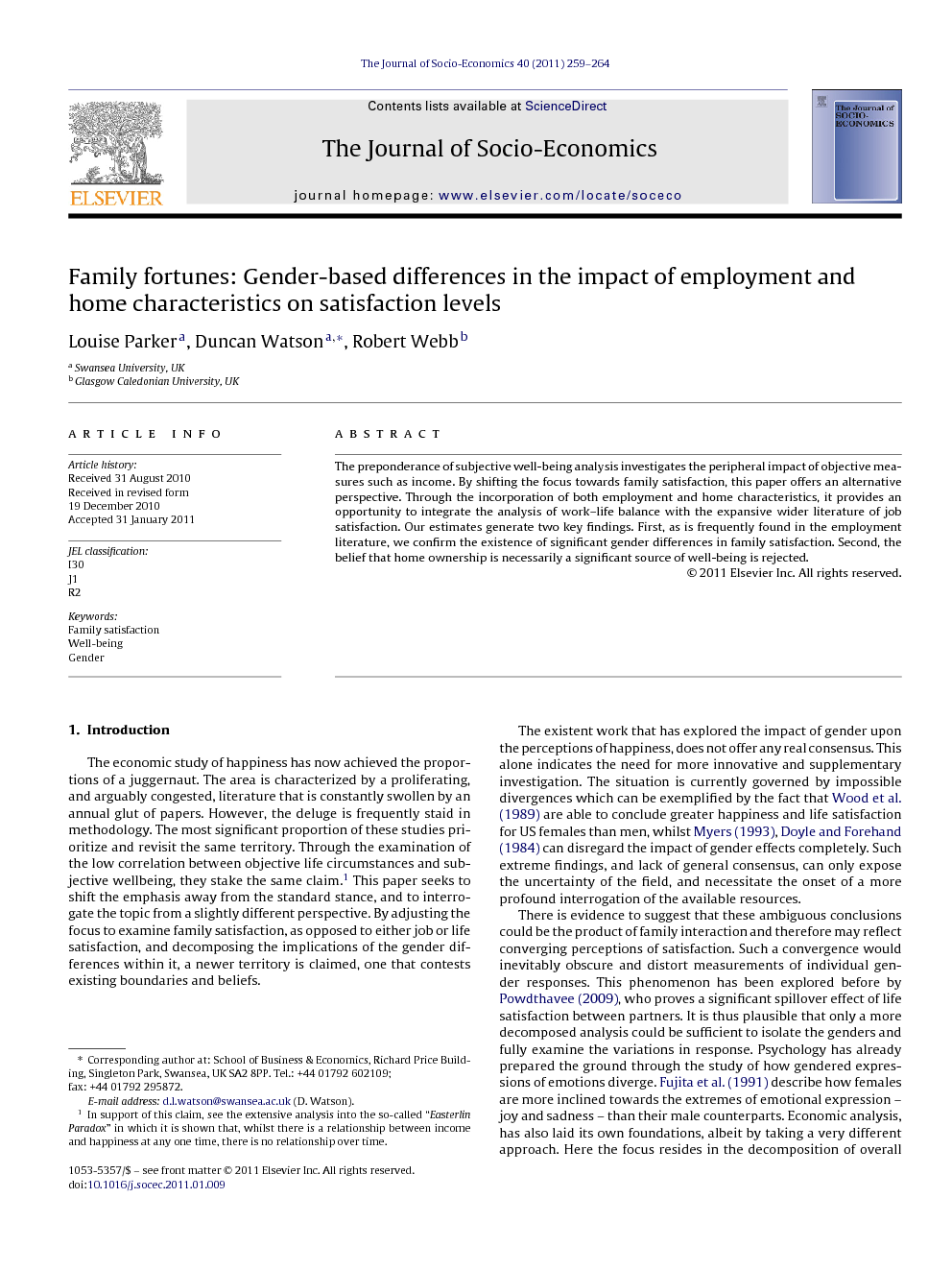 The preponderance of subjective well-being analysis investigates the peripheral impact of objective measures such as income. By shifting the focus towards family satisfaction, this paper offers an alternative perspective. Through the incorporation of both employment and home characteristics, it provides an opportunity to integrate the analysis of work–life balance with the expansive wider literature of job satisfaction. Our estimates generate two key findings. First, as is frequently found in the employment literature, we confirm the existence of significant gender differences in family satisfaction. Second, the belief that home ownership is necessarily a significant source of well-being is rejected.

The economic study of happiness has now achieved the proportions of a juggernaut. The area is characterized by a proliferating, and arguably congested, literature that is constantly swollen by an annual glut of papers. However, the deluge is frequently staid in methodology. The most significant proportion of these studies prioritize and revisit the same territory. Through the examination of the low correlation between objective life circumstances and subjective wellbeing, they stake the same claim.1 This paper seeks to shift the emphasis away from the standard stance, and to interrogate the topic from a slightly different perspective. By adjusting the focus to examine family satisfaction, as opposed to either job or life satisfaction, and decomposing the implications of the gender differences within it, a newer territory is claimed, one that contests existing boundaries and beliefs. The existent work that has explored the impact of gender upon the perceptions of happiness, does not offer any real consensus. This alone indicates the need for more innovative and supplementary investigation. The situation is currently governed by impossible divergences which can be exemplified by the fact that Wood et al. (1989) are able to conclude greater happiness and life satisfaction for US females than men, whilst Myers (1993), Doyle and Forehand (1984) can disregard the impact of gender effects completely. Such extreme findings, and lack of general consensus, can only expose the uncertainty of the field, and necessitate the onset of a more profound interrogation of the available resources. There is evidence to suggest that these ambiguous conclusions could be the product of family interaction and therefore may reflect converging perceptions of satisfaction. Such a convergence would inevitably obscure and distort measurements of individual gender responses. This phenomenon has been explored before by Powdthavee (2009), who proves a significant spillover effect of life satisfaction between partners. It is thus plausible that only a more decomposed analysis could be sufficient to isolate the genders and fully examine the variations in response. Psychology has already prepared the ground through the study of how gendered expressions of emotions diverge. Fujita et al. (1991) describe how females are more inclined towards the extremes of emotional expression – joy and sadness – than their male counterparts. Economic analysis, has also laid its own foundations, albeit by taking a very different approach. Here the focus resides in the decomposition of overall lifetime satisfaction into the various domains of financial situation, family life, health, and work.2 It is via the exploration of these sub-domains, that evidence of gendered variations in response can be located. This discovery has provoked a literature which exposes an apparent ‘job satisfaction’ paradox, and it is this that is of particular relevance to this paper. Despite controlling for a number of factors, job satisfaction is typically found to be significantly higher for females. Embracing this gender distinction has inspired much subsequent research in the field of psychology (see the seminal study of Mueller and Wallace, 1996). However, in contrast, economic inquiry has gravitated towards the attempt to explain away the gender distinction. Ward and Sloane (2000) concentrate their efforts on providing a more detailed account of job compensation. Whilst Sousa-Poza and Sousa-Poza (2003) argue that the apparently paradoxical situation is in fact a temporary phenomenon. They postulate that the elevated levels of female job satisfaction reflect a coincidental expectation of better work conditions, rather than reveal a gender distinction. This paper parts company with such measures of job satisfaction, adequately detailed by others, and considers the gender disparities that function in the realm of “family satisfaction”. Such a modification recommends the opportunity to supplement and enhance the field of job satisfaction, without re-treading old ground. It facilitates the exploration of how perceived negative employment traits can impinge on the quality of home life. Thus, the paper establishes a direct connection between the literature of general happiness and that literature which prioritizes the “work–life balance”. It is anticipated that this stance will complement the existing study of family satisfaction, an analysis that has typically focused on detailing cross-domain links. For example, Frone et al. (1994) present an enquiry that assesses the hypothetical spillover effects that operate between job and family satisfaction. Their study locates issues of simultaneity, where key variables influence both job and life satisfaction. Augmenting this conclusion, Ford et al. (2007) explore the way in which family and job satisfaction are dependent on work-specific variables and family-specific variables, respectively. This sanctions the derivation of key policy implications such as “organizations cannot optimize employee satisfaction without considering non-work influences”. However, the analysis of the family domain undertaken in this paper presents an opportunity to advance the adopted empirical specification in order to explain the traits that increase family satisfaction levels. It is through the combined consideration of both work and home characteristics that this paper distinguishes itself from the previous evaluations of job satisfaction. In addition, by providing an incisive mechanism to more fully explore any distinction in gender attitudes, it also stakes a small claim beyond the existing frontier.

The paper considers a sample of British employed workers and, using a sample selection ordered probit approach, tests for male and female distinctions in family satisfaction levels. Generally the raw data recommends key similarities, with the overall distribution of family satisfaction levels being rather analogous. On closer inspection and looking at three variable categories, our statistical analysis tells a different story, one which confirms that males and females perceive family satisfaction quite distinctly. To test our home and work hypotheses, we control for numerous basic household characteristics. It is perhaps unsurprising that living as a single parent has a substantially negative impact on female satisfaction levels. Given the selected sample is restricted to those in employment, the strain on the type of household must be considerable. That this effect is not replicated for males is most likely to reflect the small number of single parent males in the sample. It is when aspects such as marriage and children are considered that more substantial effects become apparent. Surprisingly, we only find significant effects for males. This suggests that further work is required to assess the impact of family structure on female well-being. The income/employment estimates also exhibit significantly gendered distinctions. The only noteworthy effect of income is to be found in the female group, and it is relative income that is found to be vital. The discovery that females are more conscious of the level of their income relative to others in their profession could reflect a perceived notion of monetarily failing/benefiting the family. It is also a product of the institutionalized culture of gender inequality in the workplace that necessitates a more acute awareness of such disparities. Hour constraints impact on both males and females, but again the effect is considerably larger for females. The possibility that the job/family satisfaction balance is so much more precarious and complex for females than males necessitates further investigation. Such research could well be vital to illuminating the intricate nuances that impel gender distinction in job satisfaction rates. A comparison of our results with general life satisfaction would also have been valuable. However, due to the characteristics of the BSA survey, this was not possible. Given the results found in this paper, further research that more completely compares the different components of satisfaction is recommended. Perhaps most important is the rejection of the premise that home ownership necessarily leads to a positive impact on satisfaction levels. The insignificance of a housing tenure variable could be deemed to be unsurprising. Assuming the house purchase is not a recent event, it can be expected that other factors will dominate the satisfaction response. Whilst investigation of these ‘adaptation’ issues would require a panel data approach, the distinction this paper makes between movers and stayers indicates that the overall effects may be more complex. Thus, female owner–occupier satisfaction levels diminish as a dwelling is deemed to be inferior and requiring replacement. The accepted tendency is to assume that home ownership provides substantial benefits for family life and should therefore be encouraged. Our findings substantially contradict this and suggest that it may well be false perceptions of well-being that lead to policies that are skewed towards the increase of home ownership rates.