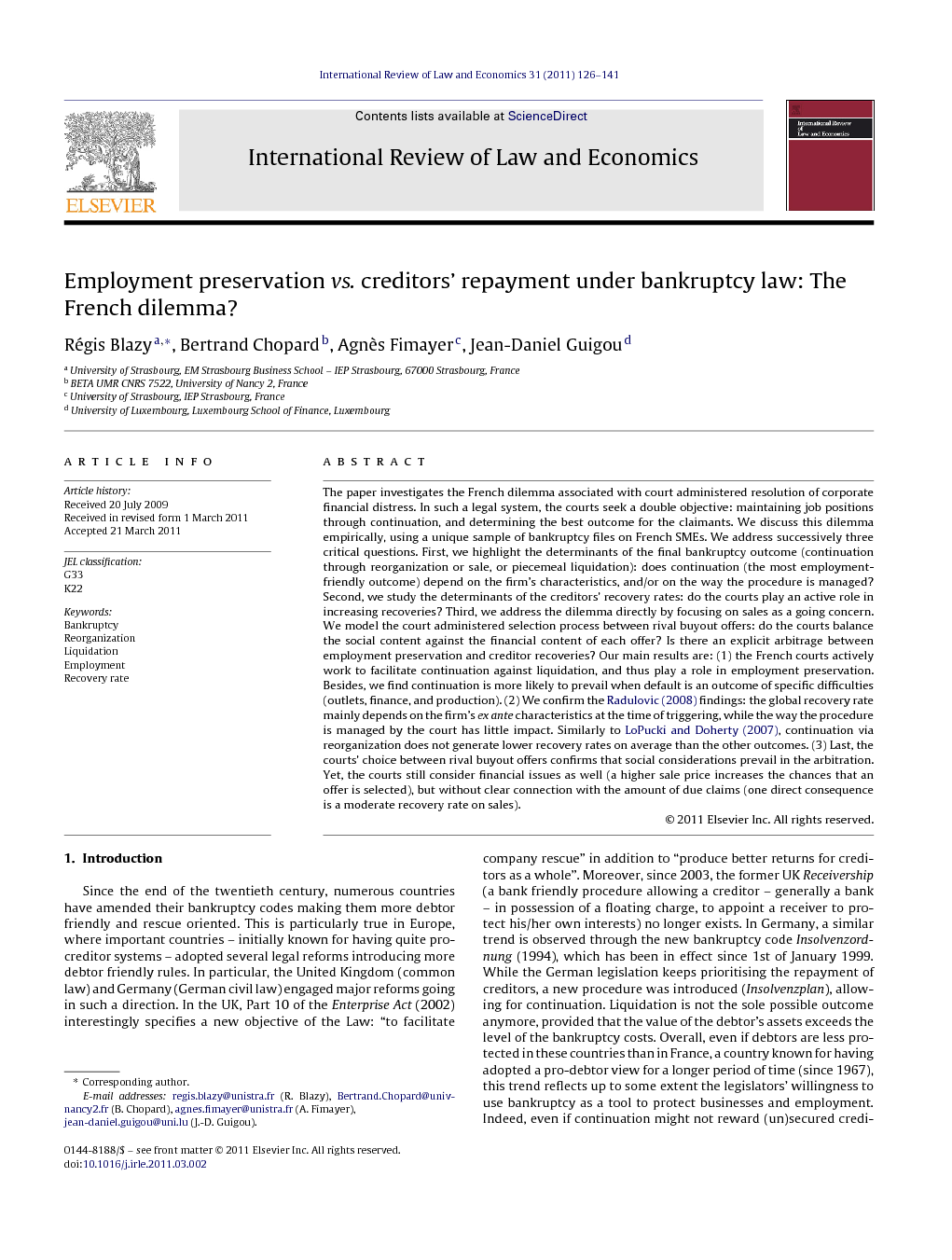 The paper investigates the French dilemma associated with court administered resolution of corporate financial distress. In such a legal system, the courts seek a double objective: maintaining job positions through continuation, and determining the best outcome for the claimants. We discuss this dilemma empirically, using a unique sample of bankruptcy files on French SMEs. We address successively three critical questions. First, we highlight the determinants of the final bankruptcy outcome (continuation through reorganization or sale, or piecemeal liquidation): does continuation (the most employment-friendly outcome) depend on the firm's characteristics, and/or on the way the procedure is managed? Second, we study the determinants of the creditors’ recovery rates: do the courts play an active role in increasing recoveries? Third, we address the dilemma directly by focusing on sales as a going concern. We model the court administered selection process between rival buyout offers: do the courts balance the social content against the financial content of each offer? Is there an explicit arbitrage between employment preservation and creditor recoveries? Our main results are: (1) the French courts actively work to facilitate continuation against liquidation, and thus play a role in employment preservation. Besides, we find continuation is more likely to prevail when default is an outcome of specific difficulties (outlets, finance, and production). (2) We confirm the Radulovic (2008) findings: the global recovery rate mainly depends on the firm's ex ante characteristics at the time of triggering, while the way the procedure is managed by the court has little impact. Similarly to LoPucki and Doherty (2007), continuation via reorganization does not generate lower recovery rates on average than the other outcomes. (3) Last, the courts’ choice between rival buyout offers confirms that social considerations prevail in the arbitration. Yet, the courts still consider financial issues as well (a higher sale price increases the chances that an offer is selected), but without clear connection with the amount of due claims (one direct consequence is a moderate recovery rate on sales).

Modern bankruptcy laws offer a specific framework to restructure distressed firms or to close them down if restructuring is impossible. Such framework is not neutral regarding the social and financial stakes. Both may not be attainable at the same time. In practice, there are many differences in the rules that govern bankruptcy and in the orientation of national codes. In this area of comparative law, several of our conclusions show that the French courts actively protect employment, with a limited impact on creditors’ recoveries. Yet, we do not find a negative impact of the courts’ action on such recoveries. Our results can be summarized as follows. First, the French courts actively work to facilitate continuation against liquidation, and thus preserve employment. Second, similarly to Radulovic (2008), we find the global recovery rate mainly stems from the firm's ex ante situation at the time of triggering, while the way the procedure is managed by the court has little impact. As found by LoPucki and Doherty (2007), continuations through reorganization do not generate lower global recovery rates. Third, the courts’ choice between rival buyout offers confirms that social considerations prevail in the arbitration. Yet, the courts still consider financial issues as well: indeed, a higher proposed sale price increases the chances that an offer is selected, but without clear connection with the amount of due claims. Overall, the French courts play an active role in the bankruptcy procedure. The tradeoff between social and financial consideration is likely to have ex ante effects: as shown by Davydenko and Franks (2008), one possible effect is that French banks require more collateral when they lend credit. In addition, they may rely on special collateral forms which minimize the risk of dilution during the court-administered bankruptcy process. From that perspective, French banks have a Coasian approach to their national pro-debtor bankruptcy code. Since 2005, the French bankruptcy code has granted the creditors the right to vote for or against the reorganization plans. The Court still has the power to validate such plan, but the bankruptcy process is slightly less court-administered. The next challenge is to assess up to what extent such reform has modified the tradeoff between employment preservation and creditors’ repayment.