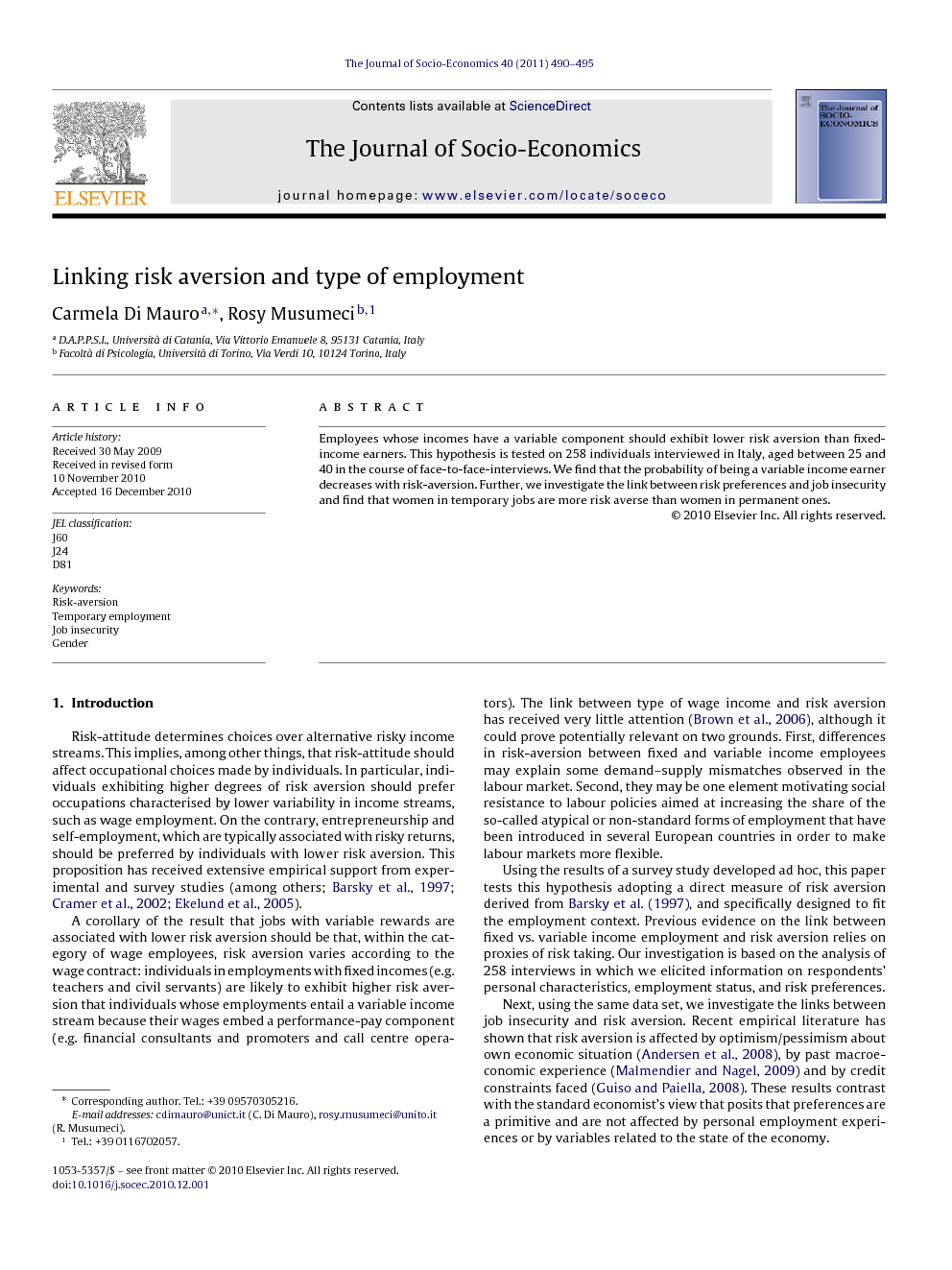 Employees whose incomes have a variable component should exhibit lower risk aversion than fixed-income earners. This hypothesis is tested on 258 individuals interviewed in Italy, aged between 25 and 40 in the course of face-to-face-interviews. We find that the probability of being a variable income earner decreases with risk-aversion. Further, we investigate the link between risk preferences and job insecurity and find that women in temporary jobs are more risk averse than women in permanent ones.

Risk-attitude determines choices over alternative risky income streams. This implies, among other things, that risk-attitude should affect occupational choices made by individuals. In particular, individuals exhibiting higher degrees of risk aversion should prefer occupations characterised by lower variability in income streams, such as wage employment. On the contrary, entrepreneurship and self-employment, which are typically associated with risky returns, should be preferred by individuals with lower risk aversion. This proposition has received extensive empirical support from experimental and survey studies (among others; Barsky et al., 1997, Cramer et al., 2002 and Ekelund et al., 2005). A corollary of the result that jobs with variable rewards are associated with lower risk aversion should be that, within the category of wage employees, risk aversion varies according to the wage contract: individuals in employments with fixed incomes (e.g. teachers and civil servants) are likely to exhibit higher risk aversion that individuals whose employments entail a variable income stream because their wages embed a performance-pay component (e.g. financial consultants and promoters and call centre operators). The link between type of wage income and risk aversion has received very little attention (Brown et al., 2006), although it could prove potentially relevant on two grounds. First, differences in risk-aversion between fixed and variable income employees may explain some demand–supply mismatches observed in the labour market. Second, they may be one element motivating social resistance to labour policies aimed at increasing the share of the so-called atypical or non-standard forms of employment that have been introduced in several European countries in order to make labour markets more flexible. Using the results of a survey study developed ad hoc, this paper tests this hypothesis adopting a direct measure of risk aversion derived from Barsky et al. (1997), and specifically designed to fit the employment context. Previous evidence on the link between fixed vs. variable income employment and risk aversion relies on proxies of risk taking. Our investigation is based on the analysis of 258 interviews in which we elicited information on respondents’ personal characteristics, employment status, and risk preferences. Next, using the same data set, we investigate the links between job insecurity and risk aversion. Recent empirical literature has shown that risk aversion is affected by optimism/pessimism about own economic situation (Andersen et al., 2008), by past macroeconomic experience (Malmendier and Nagel, 2009) and by credit constraints faced (Guiso and Paiella, 2008). These results contrast with the standard economist's view that posits that preferences are a primitive and are not affected by personal employment experiences or by variables related to the state of the economy. Trends towards flexibility in some European labour markets, coupled with the effect of the global macroeconomic crisis, have given rise to feelings of job insecurity among workers (Gallup, 2004 and Gallup, 2008). The perception of job insecurity has affected household consumption (Benito, 2006) and investment decisions (Diaz-Serrano, 2005). We conjecture that individuals holding insecure jobs because their employment is temporary may be less prone to risk taking than employees in tenured jobs. Results suggest that, indeed, the probability of being in a variable income job decreases with risk aversion. Results concerning the dependence of risk aversion on job security suggest that women in permanent jobs are less risk averse than women in temporary jobs. The remaining of the paper is organized as follows: Section 2 discusses the relevant literature; Section 3 presents the design of the study and the hypotheses tested; Section 4 shows the results of the data analysis. Section 5 concludes with implications and possible extensions of our findings.

This paper has presented the results from an exploratory survey study which has collected information on risk aversion, employment status, and demographics for 258 Italian respondents. The aim of the research was twofold: first to investigate whether employees in fixed income jobs exhibit higher risk aversion than employees with variable income jobs. Second, to study whether holding a temporary job, which may affect perceived job insecurity, is related to risk aversion. We find strong support for the first hypothesis, that complements the existing literature on the relation between risk aversion and self-employment. In particular, the higher risk aversion of fixed-wage earners as opposed to variable income employees confirms the findings of Brown et al. (2006) who had used a far larger data set than ours but only indirect measures of risk attitudes, such as insurance purchase and gambling. The relation between having a permanent job and risk aversion is gender-dependent: it is negative for women and positive for men. The estimated coefficients are not statistically significant, and this may be attributed to the fact that the condition of being in permanent vs. temporary jobs correlates not only with gender but also with other respondents’ characteristics, such as income. The fact that women in permanent jobs are less risk averse than women with temporary jobs conflicts with the idea that more risk-averse individuals prefer sure income streams through time, and calls into question the standard direction of causality from risk-aversion to occupational choice. Though our analysis cannot prove the direction of causality, it is at least suggestive of the fact that risk-aversion levels in women may be affected by the difficulty of obtaining permanent jobs. Sociological studies have underlined that in countries such as Italy where the “male bread-winner model is predominant, it will be more important for males to establish themselves in a secure job as opposed to females” (Blossfeld et al., 2005). Job instability may be accompanied by a feeling of insecurity. This conjecture is strengthened by the observation that pessimism about the future own economic situation is positively related to risk aversion. Larger scale and longitudinal studies are needed to confirm the robustness of these findings, which could bear relevance for evaluating the effects of labour market policies. For instance, stronger results could be obtained from following the employment history of respondents and thus from measuring risk aversion changes within subject, as done in the studies of Harrison and collaborators. This and other improvements of the research project are in our agenda.