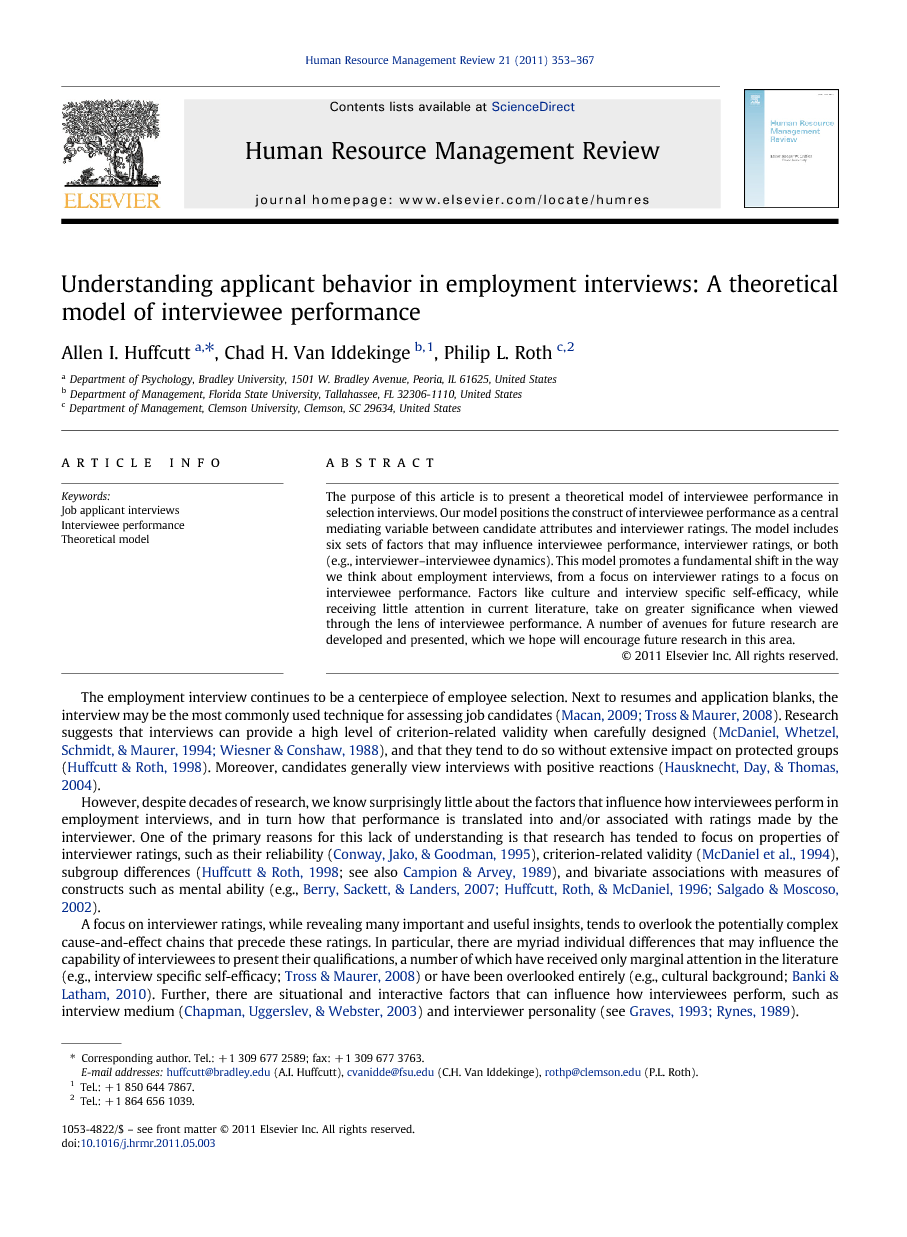 The employment interview continues to be a centerpiece of employee selection. Next to resumes and application blanks, the interview may be the most commonly used technique for assessing job candidates (Macan, 2009 and Tross and Maurer, 2008). Research suggests that interviews can provide a high level of criterion-related validity when carefully designed (McDaniel et al., 1994 and Wiesner and Conshaw, 1988), and that they tend to do so without extensive impact on protected groups (Huffcutt & Roth, 1998). Moreover, candidates generally view interviews with positive reactions (Hausknecht, Day, & Thomas, 2004). However, despite decades of research, we know surprisingly little about the factors that influence how interviewees perform in employment interviews, and in turn how that performance is translated into and/or associated with ratings made by the interviewer. One of the primary reasons for this lack of understanding is that research has tended to focus on properties of interviewer ratings, such as their reliability (Conway, Jako, & Goodman, 1995), criterion-related validity (McDaniel et al., 1994), subgroup differences (Huffcutt & Roth, 1998; see also Campion & Arvey, 1989), and bivariate associations with measures of constructs such as mental ability (e.g., Berry et al., 2007, Huffcutt et al., 1996 and Salgado and Moscoso, 2002). A focus on interviewer ratings, while revealing many important and useful insights, tends to overlook the potentially complex cause-and-effect chains that precede these ratings. In particular, there are myriad individual differences that may influence the capability of interviewees to present their qualifications, a number of which have received only marginal attention in the literature (e.g., interview specific self-efficacy; Tross & Maurer, 2008) or have been overlooked entirely (e.g., cultural background; Banki & Latham, 2010). Further, there are situational and interactive factors that can influence how interviewees perform, such as interview medium (Chapman, Uggerslev, & Webster, 2003) and interviewer personality (see Graves, 1993 and Rynes, 1989). We believe that continued advancement in interview research will require a stronger and more direct focus on interviewee performance. Unfortunately, although there is some primary research pertaining to attributes that influence interviewee performance (e.g., impression management tactics: Ellis et al., 2002 and Levashina and Campion, 2007) and a handful of interview process models (e.g., Arvey and Campion, 1982, Dipboye, 2005, Macan, 2009, Raza and Carpenter, 1987 and Schmitt, 1976), there has not been a comprehensive effort to identify and integrate the wide array of personal and situational factors that may influence how interviewees perform, and the subsequent relationship between that performance and interviewer ratings. Our goal is to address this deficit by developing a theoretical model of performance in selection interviews, one that positions the construct of interviewee performance as a central mediating variable between interviewee attributes and interviewer ratings. The model includes several groupings of factors that could influence interviewee performance, interviewer ratings, or both. A number of these factors, while receiving relatively little research attention, take on greater theoretical importance when viewed through the lens of interviewee performance. We hope that this model will challenge researchers and practitioners to think about the interview in new ways, as well as provide a basis for future research. We begin with a discussion of our focal construct, after which we present our model.

This paper calls for a fundamental shift in the way we think about employment interviews. While a focus on interviewer ratings is natural given that they are the outcome of the interview process, there are limits as to how much we can learn from that focus. We suggest that continued progression will require a new focus on Interviewee performance, a central mediating variable between candidate attributes and interviewer ratings. Similar to the construct of job performance (Campbell et al., 1993), interviewee performance reflects what candidates actually say and do. Interviewee performance spans multiple domains, including verbal content, verbal delivery, and nonverbal actions. A key proposition of our model is that some factors may serve to strengthen interviewee performance, whereas other factors may serve to inhibit it. A positive interviewer style, for instance, can provide positive reinforcement and help candidates more effectively present their job qualifications. Conversely, negative pre-interview impressions can cause interviewers to treat candidates less favorably (e.g., spend less time with them, ask them more difficult questions), which would make it more challenging for them to present their qualifications. When strengthening and inhibiting effects are viewed collectively, a somewhat unique perspective emerges. Specifically, the factors in the model intertwine in a complex “give and take” pattern, and interviewee performance can be thought of as the cumulative result or sum (using a mathematical analogy) of these influences. Further, the same cumulative result can be arrived at through a very different combination of factors. By identifying and measuring these influencing factors, it may be possible to assess interviewee performance more directly. For instance, these factors could be entered into a regression equation to help explain the difference between independent ratings of candidate qualifications and ratings by the interviewer. From a scientific perspective, the array of variables involved in the complex give and take pattern is conceptually rich and generates a significant number of avenues for future research. We are excited by these avenues, particularly in overlooked areas such as candidate culture and interviewee state. Variables such as these hold considerable promise to take our understanding of this unique selection approach to new levels. To aid future research, we summarize the research avenues generated in this paper in Table 1.Finally, viewing interviewee performance as a collective sum of influencing factors offers considerable potential for advancing the practice of employment interviews. From the candidates' perspective, it might be possible to modify the interview process to facilitate presentation of their qualifications. For instance, factors that strengthen interviewee performance could be emphasized, such as positive reinforcement by the interviewer. Conversely, procedures could be instituted to address factors that may inhibit the performance of some candidates, such as giving anxious candidates more time in the organizational environment before the actual interview. In short, such a viewpoint promotes consideration of the interview as a holistic process rather than just the asking of questions and the rating of responses. From an organizational perspective, there is much that could be gained from a stronger emphasis on interviewee performance. The goal of selection is to assess the knowledge, skills, and abilities of candidates in relation to a given position. A number of the factors in our model may interfere with this assessment, whether it is through inhibiting the ability of some interviewees to perform or through influencing interviewers in ways that drive their ratings further away from actual interviewee performance. Regardless, there is the potential for a greater understanding of these factors to promote a more thorough and accurate assessment of candidates. In turn, better assessments could result in increased criterion-related validity of interviews, improved levels of job performance for those hired from them, and a better bottom line for the company. In closing, interview research appears to be at somewhat of a “cross-roads” point. A dominant focus on interviewer ratings has brought us a considerable distance and clearly has been meaningful. Yet, to continue progressing, a significant change in the way we view interviews may be needed. We believe that interviewee performance, positioned as a central mediating variable between interviewee attributes and interviewer ratings, may very well be the focus that leads to a greater understanding of interview dynamics and potentially positive benefits for both candidates and organizations.