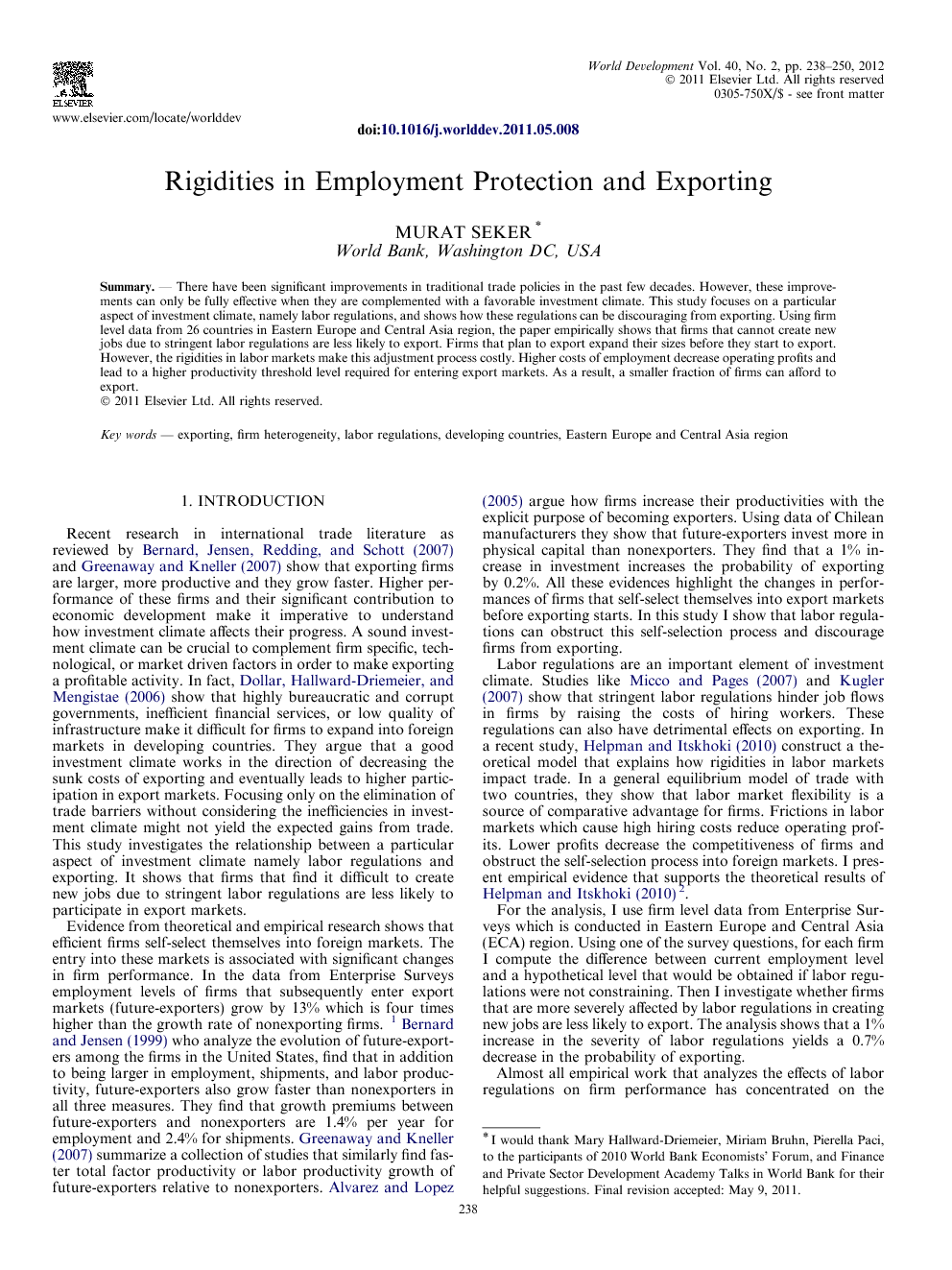 There have been significant improvements in traditional trade policies in the past few decades. However, these improvements can only be fully effective when they are complemented with a favorable investment climate. This study focuses on a particular aspect of investment climate, namely labor regulations, and shows how these regulations can be discouraging from exporting. Using firm level data from 26 countries in Eastern Europe and Central Asia region, the paper empirically shows that firms that cannot create new jobs due to stringent labor regulations are less likely to export. Firms that plan to export expand their sizes before they start to export. However, the rigidities in labor markets make this adjustment process costly. Higher costs of employment decrease operating profits and lead to a higher productivity threshold level required for entering export markets. As a result, a smaller fraction of firms can afford to export.

A large number of studies have shown that firms that export are better performers than nonexporting firms. These firms employ more workers, grow faster, and they are more productive. They make a significant contribution to aggregate growth and economic development. Dollar et al. (2006) highlight the importance of the investment climate in determining the entry of firms into foreign markets. They show that in addition to technological or market driven factors, factors like finance, infrastructure, and customs services affect a firm’s decision to expand into foreign markets. In this study I focus on another aspect of the investment climate. I analyze how rigid labor regulations can distort the exporting decision. Evidence shows that future exporters start to increase their size before they start to export and they have to be competitive in order to survive in foreign markets. However, stringent labor regulations increase the opportunity cost of hiring workers and lead to lower competitiveness of firms. Although these regulations are established to protect workers and increase aggregate welfare, they can have distortive effects on labor demand of firms. This discouragement in creating jobs can make firms reluctant to enter foreign markets. Most studies that analyze the effects of labor regulations resort to cross country data in institutions and regulations using different data sources which might create problems due to differences in measurement across countries. These problems are ruled out here because the data used are homogeneous in unit of observations, the measures of firm performance, and labor regulations. In my analysis, I use firm level data from ECA region. I look at the variation in the stringency of labor regulations across sectors and show how much of that variation explains the variation in the decision to export. The results show that sectors in which firms want to create more new jobs have lower shares of exporters. The same conclusion is drawn when the analysis is restricted to industries in the manufacturing sector. Next, I show that these findings are not sensitive to inclusion of additional firm level control variables like access to finance, past innovative performance, and the skill level. The results are also not sensitive to the use of alternative measures for labor market rigidities obtained from other questions from the surveys and from Doing Business database. Evidence from the panel data provides further support to the robustness of the findings. There are few studies that analyze the detrimental effects of labor regulations on firm and industry performance. In a recent study, Helpman and Itskhoki (2010) construct a structural model where they show that stringent hiring laws distort exporting decision of firms. They also show that lower the frictions in labor markets the more a country starts to gain from lower trade barriers. Although the link between labor regulations and exporting may not be too obvious, stringent regulations can carry a high cost in the form of negative consequences for job growth which effect entry into export markets.