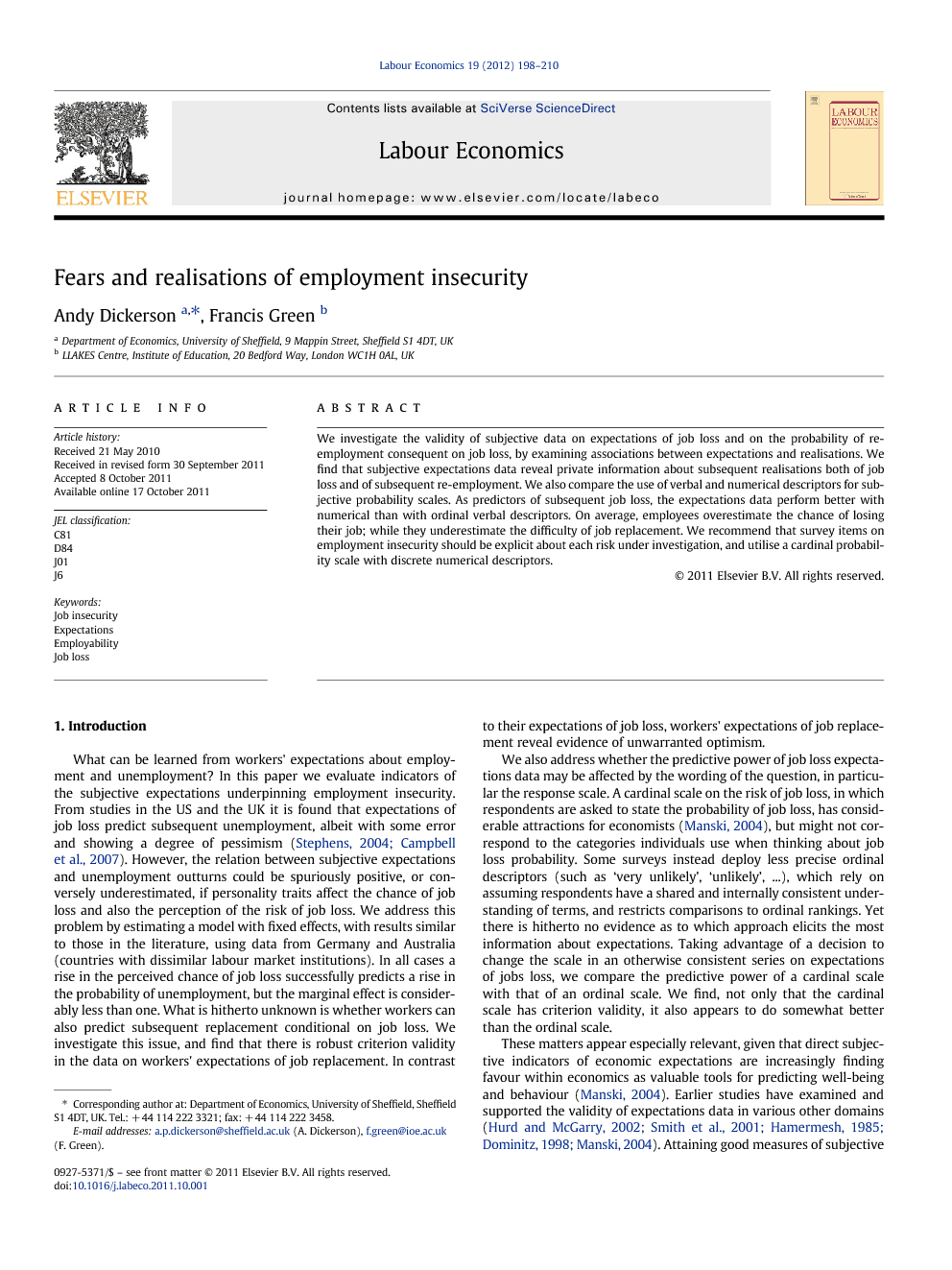 We investigate the validity of subjective data on expectations of job loss and on the probability of re-employment consequent on job loss, by examining associations between expectations and realisations. We find that subjective expectations data reveal private information about subsequent realisations both of job loss and of subsequent re-employment. We also compare the use of verbal and numerical descriptors for subjective probability scales. As predictors of subsequent job loss, the expectations data perform better with numerical than with ordinal verbal descriptors. On average, employees overestimate the chance of losing their job; while they underestimate the difficulty of job replacement. We recommend that survey items on employment insecurity should be explicit about each risk under investigation, and utilise a cardinal probability scale with discrete numerical descriptors.

What can be learned from workers' expectations about employment and unemployment? In this paper we evaluate indicators of the subjective expectations underpinning employment insecurity. From studies in the US and the UK it is found that expectations of job loss predict subsequent unemployment, albeit with some error and showing a degree of pessimism (Stephens, 2004 and Campbell et al., 2007). However, the relation between subjective expectations and unemployment outturns could be spuriously positive, or conversely underestimated, if personality traits affect the chance of job loss and also the perception of the risk of job loss. We address this problem by estimating a model with fixed effects, with results similar to those in the literature, using data from Germany and Australia (countries with dissimilar labour market institutions). In all cases a rise in the perceived chance of job loss successfully predicts a rise in the probability of unemployment, but the marginal effect is considerably less than one. What is hitherto unknown is whether workers can also predict subsequent replacement conditional on job loss. We investigate this issue, and find that there is robust criterion validity in the data on workers' expectations of job replacement. In contrast to their expectations of job loss, workers' expectations of job replacement reveal evidence of unwarranted optimism. We also address whether the predictive power of job loss expectations data may be affected by the wording of the question, in particular the response scale. A cardinal scale on the risk of job loss, in which respondents are asked to state the probability of job loss, has considerable attractions for economists (Manski, 2004), but might not correspond to the categories individuals use when thinking about job loss probability. Some surveys instead deploy less precise ordinal descriptors (such as ‘very unlikely’, ‘unlikely’, ...), which rely on assuming respondents have a shared and internally consistent understanding of terms, and restricts comparisons to ordinal rankings. Yet there is hitherto no evidence as to which approach elicits the most information about expectations. Taking advantage of a decision to change the scale in an otherwise consistent series on expectations of jobs loss, we compare the predictive power of a cardinal scale with that of an ordinal scale. We find, not only that the cardinal scale has criterion validity, it also appears to do somewhat better than the ordinal scale. These matters appear especially relevant, given that direct subjective indicators of economic expectations are increasingly finding favour within economics as valuable tools for predicting well-being and behaviour (Manski, 2004). Earlier studies have examined and supported the validity of expectations data in various other domains (Hurd and McGarry, 2002, Smith et al., 2001, Hamermesh, 1985, Dominitz, 1998 and Manski, 2004). Attaining good measures of subjective employment insecurity would seem to be pressing, and not just for their predictions of subsequent labour market status. Perceived job insecurity and a lack of employability have been found to generate anxiety and substantially lower the well-being of workers and their dependents, to inhibit consumer spending, and to reduce wage growth (Wichert, 2002, Benito, 2004, Lusardi, 1998, Carroll et al., 2003, Campbell et al., 2007, Di Tella et al., 2003 and Green, 2011). The impact of insecurity accounts in part for the highly detrimental effects of aggregate unemployment on the average well-being of populations. Nevertheless, the effects of employment insecurity vary across socio-economic categories, and between countries with different employment protection institutions; and this variation highlights the need for the different expectations behind feelings of employment insecurity to be more precisely specified in survey questions (Clarke and Postel-Vinay, 2004, Green, 2006 and Green, 2009). Employment insecurity comprises multiple parts, involving the risk of job loss, the chances of not finding another job, loss of income while unemployed, and uncertainty over job content. Unambiguously phrased survey instruments to capture each of these elements of uncertainty are needed, together with tested protocols to allow respondents to represent their expectations as reliably as possible. Our focus in this paper is on the first two categories. The world-wide economic downturn in 2008 serves to add some urgency to this task. The paper proceeds as follows. The next section reviews measures of employment insecurity in some prominent national and international surveys, considers arguments and evidence about the use of probabilistic or ordinal scales when measuring expectations, and connects our study to investigations within psychology of pessimism and optimism. Section 3 describes the data, the main findings are presented in 4 and 5 concludes with a discussion of the implications for survey question design and for employment insurance.