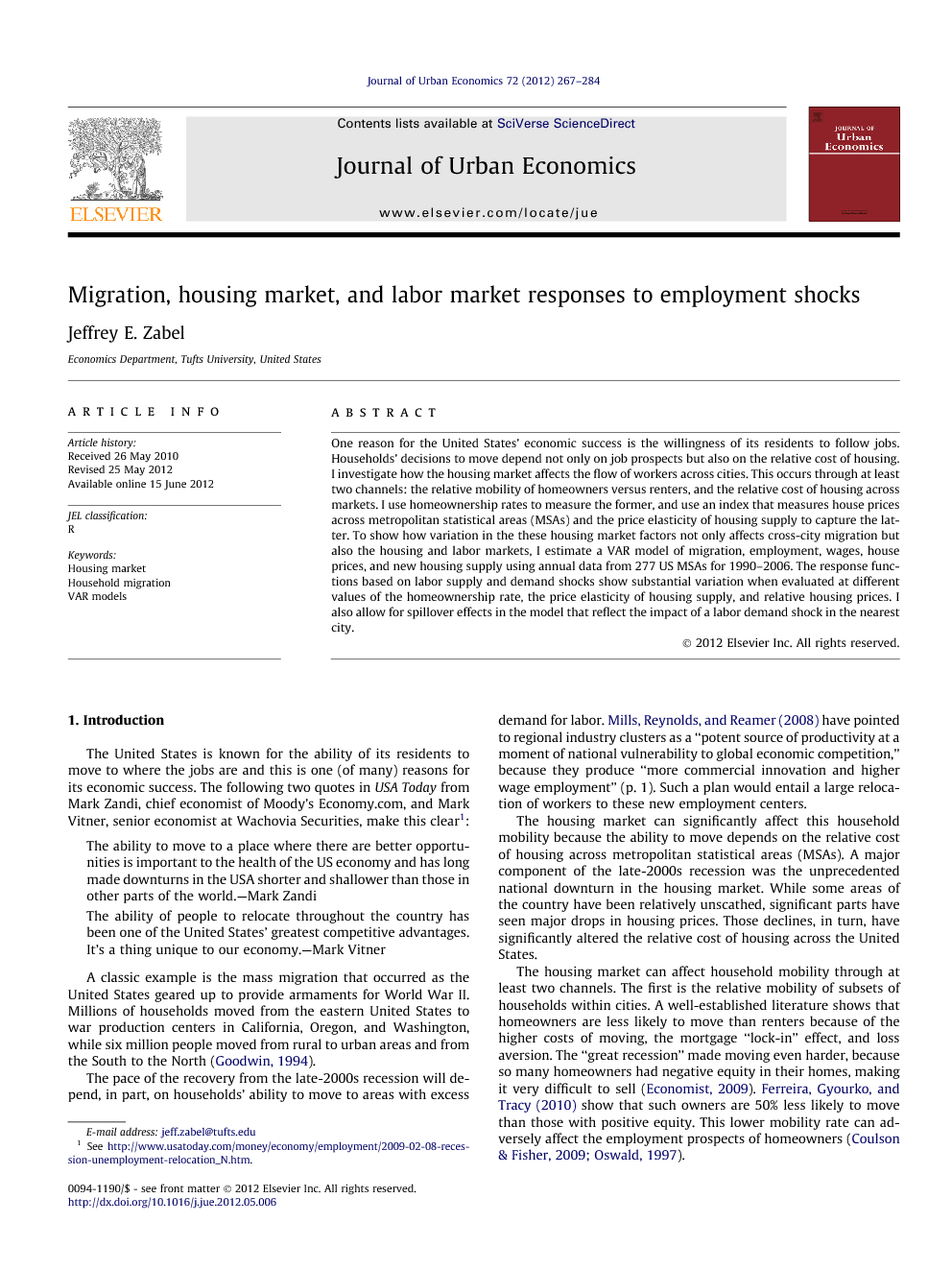 One reason for the United States’ economic success is the willingness of its residents to follow jobs. Households’ decisions to move depend not only on job prospects but also on the relative cost of housing. I investigate how the housing market affects the flow of workers across cities. This occurs through at least two channels: the relative mobility of homeowners versus renters, and the relative cost of housing across markets. I use homeownership rates to measure the former, and use an index that measures house prices across metropolitan statistical areas (MSAs) and the price elasticity of housing supply to capture the latter. To show how variation in the these housing market factors not only affects cross-city migration but also the housing and labor markets, I estimate a VAR model of migration, employment, wages, house prices, and new housing supply using annual data from 277 US MSAs for 1990–2006. The response functions based on labor supply and demand shocks show substantial variation when evaluated at different values of the homeownership rate, the price elasticity of housing supply, and relative housing prices. I also allow for spillover effects in the model that reflect the impact of a labor demand shock in the nearest city.

The United States is known for the ability of its residents to move to where the jobs are and this is one (of many) reasons for its economic success. The following two quotes in USA Today from Mark Zandi, chief economist of Moody’s Economy.com, and Mark Vitner, senior economist at Wachovia Securities, make this clear1: The ability to move to a place where there are better opportunities is important to the health of the US economy and has long made downturns in the USA shorter and shallower than those in other parts of the world.—Mark Zandi The ability of people to relocate throughout the country has been one of the United States’ greatest competitive advantages. It’s a thing unique to our economy.—Mark Vitner A classic example is the mass migration that occurred as the United States geared up to provide armaments for World War II. Millions of households moved from the eastern United States to war production centers in California, Oregon, and Washington, while six million people moved from rural to urban areas and from the South to the North (Goodwin, 1994). The pace of the recovery from the late-2000s recession will depend, in part, on households’ ability to move to areas with excess demand for labor. Mills, Reynolds, and Reamer (2008) have pointed to regional industry clusters as a “potent source of productivity at a moment of national vulnerability to global economic competition,” because they produce “more commercial innovation and higher wage employment” (p. 1). Such a plan would entail a large relocation of workers to these new employment centers. The housing market can significantly affect this household mobility because the ability to move depends on the relative cost of housing across metropolitan statistical areas (MSAs). A major component of the late-2000s recession was the unprecedented national downturn in the housing market. While some areas of the country have been relatively unscathed, significant parts have seen major drops in housing prices. Those declines, in turn, have significantly altered the relative cost of housing across the United States. The housing market can affect household mobility through at least two channels. The first is the relative mobility of subsets of households within cities. A well-established literature shows that homeowners are less likely to move than renters because of the higher costs of moving, the mortgage “lock-in” effect, and loss aversion. The “great recession” made moving even harder, because so many homeowners had negative equity in their homes, making it very difficult to sell (Economist, 2009). Ferreira, Gyourko, and Tracy (2010) show that such owners are 50% less likely to move than those with positive equity. This lower mobility rate can adversely affect the employment prospects of homeowners (Coulson and Fisher, 2009 and Oswald, 1997). A second channel is the relative cost of housing across markets: the likelihood that a household will move from one MSA to another depends on the relative cost of residing in each city.2 A direct means for capturing the relative cost of housing is an index that measures relative house prices across MSAs. An indirect means for doing so is the price elasticity of housing supply in each MSA. This measure reflects the new emphasis on the supply side of the housing market in explaining the large variation in the price of housing across the United States. In this paper, I analyze the role that the housing market plays in people’s migration responses to employment shocks across MSAs in the United States. I pay particular attention to how homeownership rates, the price elasticity of housing supply, and relative house prices affect migration rates. The longer-term migration response is tied to the housing and labor markets. Thus to show how variation in the above housing market factors not only affects cross-city migration but also the housing and labor markets, I estimate a VAR model of migration, employment, wages, house prices, and new housing supply using annual data from 277 US MSAs for 1990–2006. I then plot out response functions based on labor demand and supply shocks. These functions show substantial variation when evaluated at different values of the homeownership rate, the price elasticity of housing supply, and relative housing prices. I also allow for spillover effects in the model that reflect the impact of a labor demand shock in the nearest city. The results of this analysis will be of considerable interest to policymakers. As the United States recovers from the recession that began in the late-2000s, job openings will be generated across the nation. How these opportunities translate into actual employment will depend on the ability of workers to move to the new jobs. As I show, these employment demand shocks can generate substantial migration responses that depend on the housing market conditions. Another policy issue concerns the “brain drain” that often occurs in cities in the Mid-West or in cities with high costs of living. The results in this analysis suggest that general policies at increasing local labor supply may not result in increased employment. The next section reviews the literature that is relevant to an analysis of migration and the housing market. In the following section, I develop a model of migration and the housing and labor markets. I then discuss the data I use to estimate this model. My data set consists of information on 277 MSAs across the United States for 1990–2006, including annual data on house prices, wages, employment, in-migration, out-migration, and housing permits. My data also include estimates of the price elasticity of housing supply from Saiz (2010) and a cross-city house price index and homeownership rates from the 1990 US Decennial Census. In the last two sections, I present my results and offer concluding remarks.

In this paper I have investigated the role of the housing market in the cross-MSA migration response to labor demand and supply shocks. The migration response is affected by the housing market through at least two channels that are characterized by within- and across-MSA differences in the relative cost of housing. The former is measured by homeownership rates while the latter is captured through the price elasticity of housing supply and a cross-MSA house price index. I looked at how the model responded to an exogenous demand and supply shock when the housing market variables were set at the 10th and 90th percentiles of their respective distributions. One can think of the 90th percentiles of the homeownership rate and the house price index and the 10th percentile of the supply elasticity as the high-cost scenarios. That is, the cost of moving, the cost of housing and the cost of housing supply is higher in these cases. The 10th percentiles of the homeownership rate and the house price index and the 90th percentile of the supply elasticity are the low-cost scenarios. In the case of across-MSA differences in the housing markets, there is more in- and out-migration in the high-cost scenario in response to a labor demand shock. Thus there appears to be more churning in the high cost MSAs though net-migration is similar in both cases. Further, the house price responses are higher in the high-cost scenario in the presence of a labor demand shock. While employment and wages increase, there is little difference in these responses in the high-cost and low-cost scenarios. In the case of within-MSA differences in the housing markets, there is more out-migration in response to a negative labor demand shock in the low homeownership (low-cost) scenario. Differential responses to both the negative demand shock and the positive supply shock also come in the labor market, where the employment response is relatively lower and the wage response is higher in the high homeownership case. All of these results are indicative of the higher costs and hence greater difficulty that homeowners have in moving in response to changes in the labor market. The recession that began in the second half of the 2000s has resulted in persistently high rates of unemployment. This might well result in government policies to stimulate more employment. These results indicate that efforts to increase employment through increases in labor demand will have similar responses regardless of whether this occurs in MSAs with a high- or low-cost of housing. Though there does appear to be a greater upward pressure on house prices in the high-cost MSAs. The jobs that are generated from the efforts to stimulate employment will attract highly educated young professionals (Chen & Rosenthal, 2008). The suppliers of these young professionals are concerned about “brain drain.” These are often cities in the Mid-West that are distressed that young professionals graduating from their universities will move to the more vibrant locations such as Silicon Valley in California (see Gottleib and Joseph 2006 and Bound, Groen, Kézdic, & Turner, 2004). Other places such as Boston are worried that they are losing young professionals due to the high cost of living (Brome, 2007). One response is to increase internship opportunities for local college students (Sasser, 2008). The results in this analysis suggest that general policies at increasing labor supply may not result in increased employment but it might be the case that efforts targeted at highly educated workers will have more success at adding jobs.