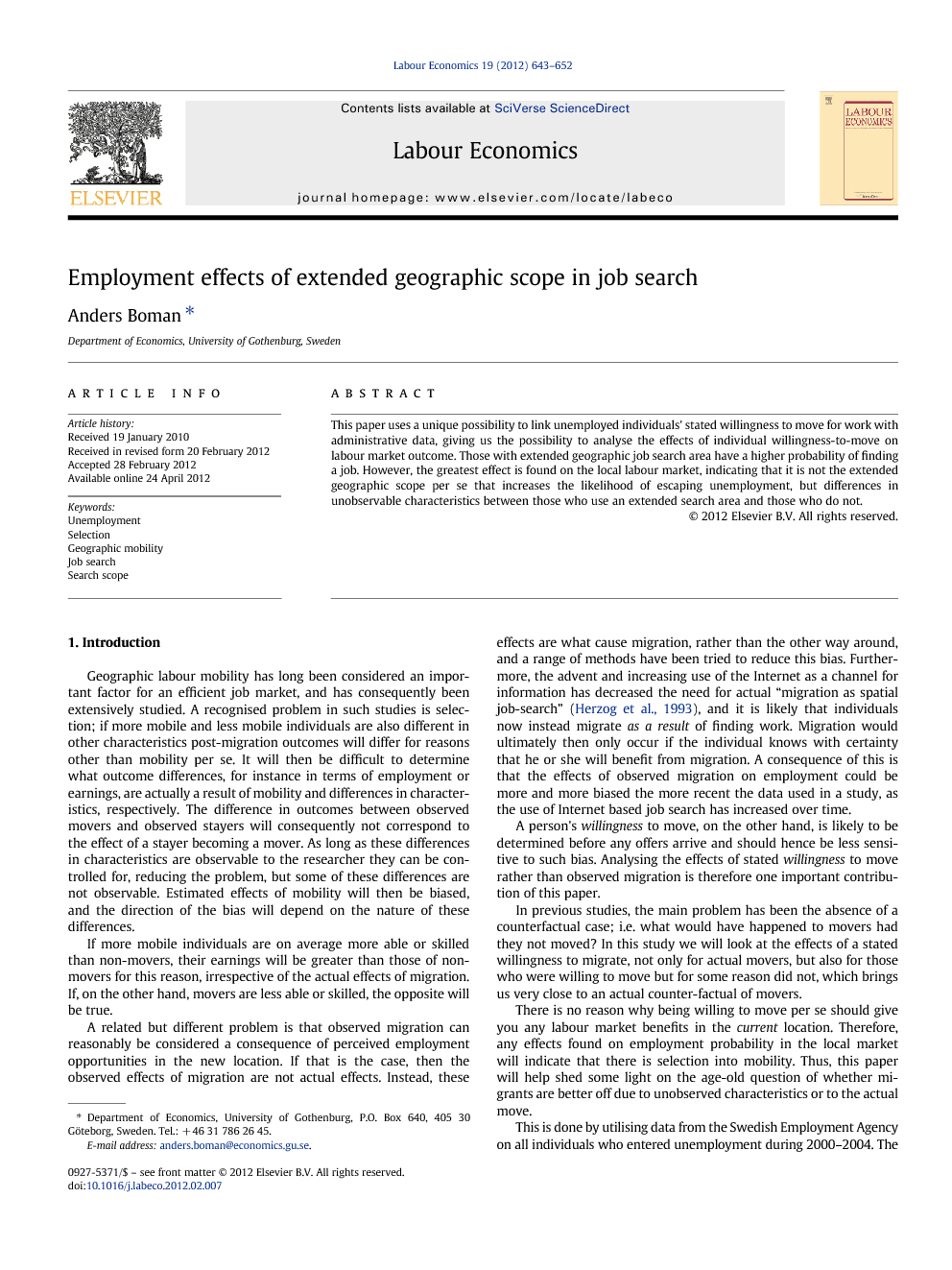 This paper uses a unique possibility to link unemployed individuals' stated willingness to move for work with administrative data, giving us the possibility to analyse the effects of individual willingness-to-move on labour market outcome. Those with extended geographic job search area have a higher probability of finding a job. However, the greatest effect is found on the local labour market, indicating that it is not the extended geographic scope per se that increases the likelihood of escaping unemployment, but differences in unobservable characteristics between those who use an extended search area and those who do not.

Geographic labour mobility has long been considered an important factor for an efficient job market, and has consequently been extensively studied. A recognised problem in such studies is selection; if more mobile and less mobile individuals are also different in other characteristics post-migration outcomes will differ for reasons other than mobility per se. It will then be difficult to determine what outcome differences, for instance in terms of employment or earnings, are actually a result of mobility and differences in characteristics, respectively. The difference in outcomes between observed movers and observed stayers will consequently not correspond to the effect of a stayer becoming a mover. As long as these differences in characteristics are observable to the researcher they can be controlled for, reducing the problem, but some of these differences are not observable. Estimated effects of mobility will then be biased, and the direction of the bias will depend on the nature of these differences. If more mobile individuals are on average more able or skilled than non-movers, their earnings will be greater than those of non-movers for this reason, irrespective of the actual effects of migration. If, on the other hand, movers are less able or skilled, the opposite will be true. A related but different problem is that observed migration can reasonably be considered a consequence of perceived employment opportunities in the new location. If that is the case, then the observed effects of migration are not actual effects. Instead, these effects are what cause migration, rather than the other way around, and a range of methods have been tried to reduce this bias. Furthermore, the advent and increasing use of the Internet as a channel for information has decreased the need for actual “migration as spatial job-search” (Herzog et al., 1993), and it is likely that individuals now instead migrate as a result of finding work. Migration would ultimately then only occur if the individual knows with certainty that he or she will benefit from migration. A consequence of this is that the effects of observed migration on employment could be more and more biased the more recent the data used in a study, as the use of Internet based job search has increased over time. A person's willingness to move, on the other hand, is likely to be determined before any offers arrive and should hence be less sensitive to such bias. Analysing the effects of stated willingness to move rather than observed migration is therefore one important contribution of this paper. In previous studies, the main problem has been the absence of a counterfactual case; i.e. what would have happened to movers had they not moved? In this study we will look at the effects of a stated willingness to migrate, not only for actual movers, but also for those who were willing to move but for some reason did not, which brings us very close to an actual counter-factual of movers. There is no reason why being willing to move per se should give you any labour market benefits in the current location. Therefore, any effects found on employment probability in the local market will indicate that there is selection into mobility. Thus, this paper will help shed some light on the age-old question of whether migrants are better off due to unobserved characteristics or to the actual move. This is done by utilising data from the Swedish Employment Agency on all individuals who entered unemployment during 2000–2004. The information of particular interest is whether an individual is willing to move, which is identified by the answer to a question asked to all unemployed when registering for unemployment benefits; i.e. whether they are willing to look for jobs outside their local labour market. Such jobs are defined as being so distant that they would require moving or weekend commuting. A ‘yes’ classifies them as being willing to move and this information is merged with a richer dataset containing detailed information on individual, family and regional characteristics. This paper studies whether this willingness to move has any effect on the probability of finding work and finds that individuals stating that they are willing to move do have better chances. However, the effect is not only present in the distant labour markets, as should be the case if there were no selection into mobility. Rather, the effect is also present, and is greater, in the local labour market. This could have two different explanations: there may be differences in characteristics, i.e. that individuals who are more willing to move also tend to be more able or dedicated to finding a job and therefore, or for other reasons, are more willing to make sacrifices to find work.1 A second reason could be that the willingness to move is a signal to the employment agency that the individual is more dedicated to finding work and is willing to make sacrifices (i.e. moving costs, both monetary and social/emotional). However, potential employers do not observe this exact variable, but will of course be aware of the origins of their job applicants and if they currently live far from the workplace they are applying to. Consequently, local employers will not observe the stated willingness to move, whilst distant employers will. Our results consequently lend firm support to previous indications of positive selection into mobility. The paper is structured in the following way: Section 2 briefly summarises the previous literature. Section 3 describes the data sources, variable definitions and descriptive statistics. In Section 4 the models to be estimated are presented, whereas Section 5 presents the results and Section 6 concludes.

I find that most expectations are fulfilled regarding the characteristics that influence willingness to move and the probability of escaping unemployment. It appears that there is positive selection into geographically extended job search. I find evidence for selection on both observables and unobservables, as indicated by the estimations of the probability of extending search and the fact that I find positive effects of extended search on the probability of finding employment locally. There is no reason why the probability of finding work in the local labour market should be affected by an individual's geographic search scope. One possible argument would be that individuals using extended search as an option of last resort may be less restrictive in what job offers they would be willing to accept in the local market, thereby increasing the probability of finding local work. However, robustness checks show that this is not the reason. Thus, I believe that the positive effect of extended search on the probability of finding work locally is primarily due to positive selection. Higher skill or ability, unobservable in the data, also makes individuals more mobile and willing to extend their search area. However, their better qualifications are observable to the potential employer, and therefore also make them more likely to find work locally. A further explanation could be that extending your search is a sign of greater dedication to finding work. Thus, we could expect these individuals to be more motivated in other aspects as well, increasing their chances of finding work in the local market as well as in distant ones. The policy implication of these results is that we cannot be certain of any positive effect on employment probabilities outside the local labour market from stricter rules for unemployment benefit eligibility, forcing unemployed individuals to search in an extended area. Since the effects of extended search are very small even in our sample where such a search is essentially voluntary, we cannot expect any major positive effects of forced extended search. In fact, it is more probable that, due to reduced motivation and effort amongst those forced into extended search, the effects would even be smaller than the already small effect found here. The effects would probably be greater in the local labour market. The implementation of such stricter rules might lead to the unemployed accepting worse jobs than they would otherwise have done, rather than risking losing their unemployment benefits. Unemployment rates could thereby be reduced. Tighter rules have already been imposed in Sweden, in the summer of 2007, stipulating a requirement to search in the whole country from the first day of unemployment, although some exceptions are made from this general rule. Data from this post-reform period will be very interesting and could add more information on these issues.