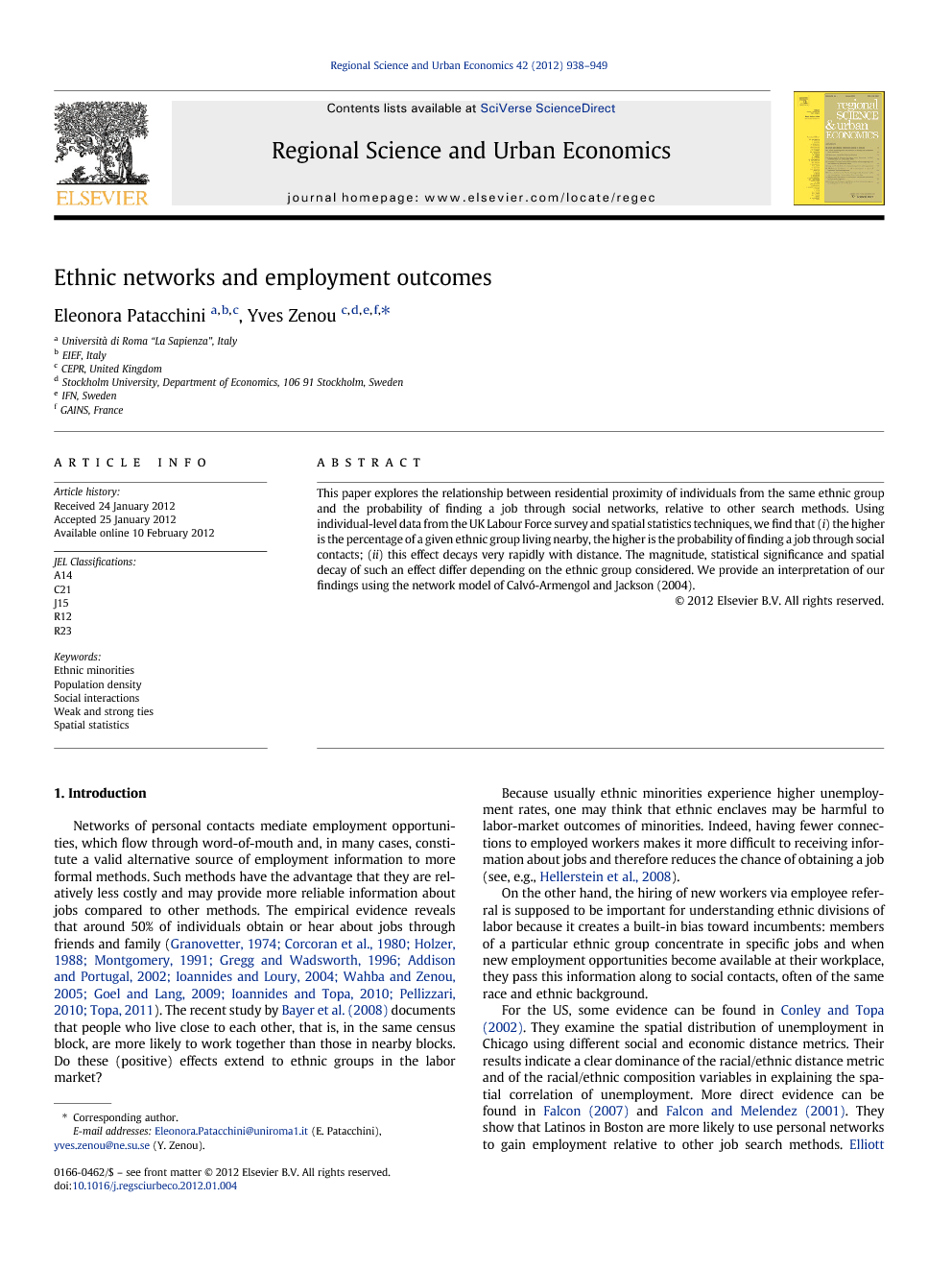 This paper explores the relationship between residential proximity of individuals from the same ethnic group and the probability of finding a job through social networks, relative to other search methods. Using individual-level data from the UK Labour Force survey and spatial statistics techniques, we find that (i) the higher is the percentage of a given ethnic group living nearby, the higher is the probability of finding a job through social contacts; (ii) this effect decays very rapidly with distance. The magnitude, statistical significance and spatial decay of such an effect differ depending on the ethnic group considered. We provide an interpretation of our findings using the network model of Calvó-Armengol and Jackson (2004).

Using individual-level data from the UK Labour Force Survey, we look at the employment prospects of ethnic minorities by adding to the traditional determinants of employment rates (sex, age, education, years since arrival in UK, percentage of high-skilled leaving nearby, etc…) local ethnic employment density bands based on travel-time between areas. Such a specification allow us to define the relevant local community in a flexible way. Using sub-regional area-fixed effects and an IV approach, we find that the higher is the percentage of employed workers from a given ethnic group living nearby, the higher is the probability of finding a job through social networks. This effect decays, however, very rapidly with distance, losing significance beyond approximately an hour travel time. We argue that local social interactions between people of the same ethnicity can explain this positive relationship and its spatial trend. Conjecturing that the social space is highly correlated to the physical space for ethnic minorities in relatively small areas, we present a theoretical framework based on Calvó-Armengol and Jackson (2004), which shows that the individual probability of finding a job increases with the number of strong ties and weak ties, and the longer the length of weak ties, the lower is this probability. Our data are, however, limited for delivering conclusive results about the mechanisms at the basis of the complex relationship between employment and ethnicity. Our purpose here is to highlight that peer effects might be an important part of the story. If ethnic employment density is interpreted as a proxy for the strength of social contacts in delivering information about jobs, then our analysis suggests that they are quite localized and are relevant in explaining the spatial distribution of ethnic employment. Our results are consistent with the view that ethnic minorities' success or failure in the labor market is influenced by the characteristics of the social networks in their local neighborhoods. Ethnic minorities living with large numbers of employed neighbors of the same ethnicity are more likely to have jobs than ethnic minorities residing in areas with fewer employed neighbors. This latter finding is consistent with earlier findings on Swedish (Edin et al., 2003), Danish (Damm, 2009) and U.S. immigration (Andersson et al., 2009) and draws at least partially on the notion that enclaves enable immigrants to form social networks that effectively make them act as intermediaries in getting jobs.