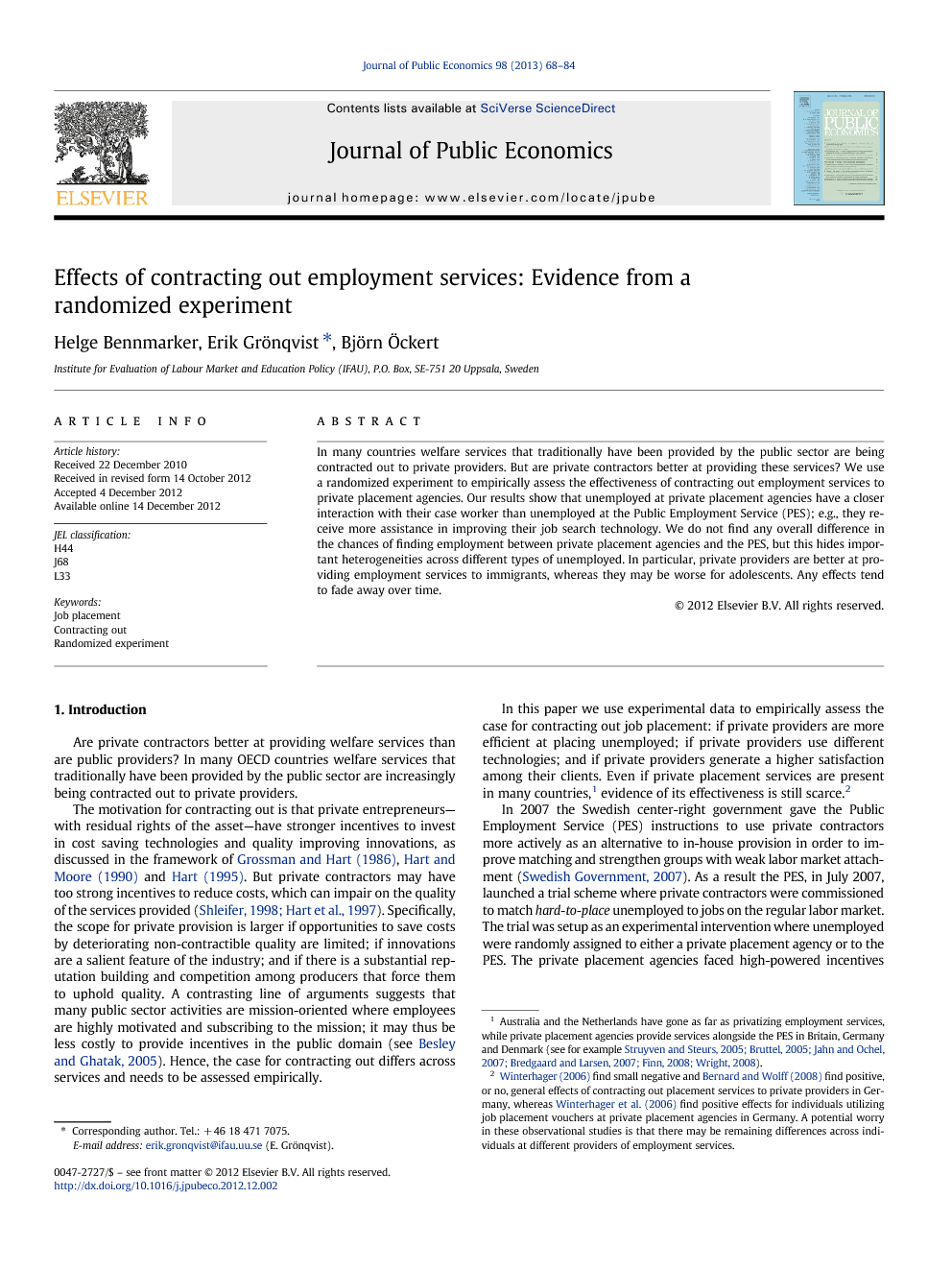 In many countries welfare services that traditionally have been provided by the public sector are being contracted out to private providers. But are private contractors better at providing these services? We use a randomized experiment to empirically assess the effectiveness of contracting out employment services to private placement agencies. Our results show that unemployed at private placement agencies have a closer interaction with their case worker than unemployed at the Public Employment Service (PES); e.g., they receive more assistance in improving their job search technology. We do not find any overall difference in the chances of finding employment between private placement agencies and the PES, but this hides important heterogeneities across different types of unemployed. In particular, private providers are better at providing employment services to immigrants, whereas they may be worse for adolescents. Any effects tend to fade away over time.

Are private contractors better at providing welfare services than are public providers? In many OECD countries welfare services that traditionally have been provided by the public sector are increasingly being contracted out to private providers. The motivation for contracting out is that private entrepreneurs—with residual rights of the asset—have stronger incentives to invest in cost saving technologies and quality improving innovations, as discussed in the framework of Grossman and Hart (1986), Hart and Moore (1990) and Hart (1995). But private contractors may have too strong incentives to reduce costs, which can impair on the quality of the services provided (Shleifer, 1998 and Hart et al., 1997). Specifically, the scope for private provision is larger if opportunities to save costs by deteriorating non-contractible quality are limited; if innovations are a salient feature of the industry; and if there is a substantial reputation building and competition among producers that force them to uphold quality. A contrasting line of arguments suggests that many public sector activities are mission-oriented where employees are highly motivated and subscribing to the mission; it may thus be less costly to provide incentives in the public domain (see Besley and Ghatak, 2005). Hence, the case for contracting out differs across services and needs to be assessed empirically. In this paper we use experimental data to empirically assess the case for contracting out job placement: if private providers are more efficient at placing unemployed; if private providers use different technologies; and if private providers generate a higher satisfaction among their clients. Even if private placement services are present in many countries,1 evidence of its effectiveness is still scarce.2 In 2007 the Swedish center-right government gave the Public Employment Service (PES) instructions to use private contractors more actively as an alternative to in-house provision in order to improve matching and strengthen groups with weak labor market attachment (Swedish Government, 2007). As a result the PES, in July 2007, launched a trial scheme where private contractors were commissioned to match hard-to-place unemployed to jobs on the regular labor market. The trial was setup as an experimental intervention where unemployed were randomly assigned to either a private placement agency or to the PES. The private placement agencies faced high-powered incentives (60% of the full payment based on successful placements), as compared with no similar financial motivation for the PES. Our results indicate that unemployed at private placement agencies receive more assistance in improving their job search technology and are more content with their placement worker than are the unemployed at the PES. While we do not find any overall difference in the probability of employment, our results show that immigrants at private providers get significantly higher employment probabilities and wage earnings up to 12 months after randomization. Private contractors also appear to be worse at providing such services to adolescents. An important additional finding is that absent the experimental variation we would have reached different conclusions about the effectiveness of private placement services, even though we have a rich set of covariates. The procurement process in our setting is representative for public tendering of welfare services. Contracts are awarded based on a two-stage sealed bid tendering process where both price and quality are considered in the second stage; which is in line with EU directive (2004/18/EC) on public contracts. In general, the higher the complexity of the service supplied the more important are non-price attributes in contract awarding criteria (Carpineti et al., 2006). The incentives induced by the contracts are strong—as contractors are remunerated on the final outcome, i.e. successful placement—compared to contracting of welfare services in other settings which are often paid on some intermediate outcome (e.g. fee-for-service) or the demand attracted (e.g. voucher per client attracted). Moreover, our contracted outcome captures many aspects of quality and is observable and verifiable, thus further aligning incentives towards efficient production of the desired outcome. Hence, by providing empirical evidence in a setting with strongly incentivized contracts and a well defined service, where the extent of non-contractible quality is limited; where there is a substantial competition for contracts; and where performance may have consequences for future procurement, we also contribute to the more general discussion on when a government should provide a service in-house and when it should contract out provision (see for example Hart et al., 1997, Dewenter and Malatesta, 2001, Duggan, 2004, Aizer et al., 2007, Lindqvist, 2008 and Bloom et al., 2006 for work on private versus public in other settings).

Whether a government should provide services in-house or whether it should contract out provision is a central policy question. In this paper we have assessed the case for contracting out employment services to private job placement agencies in Sweden. The setting exhibits many of the ex-ante arguments for when the scope for private provision is likely to be large, as suggested by Grossman and Hart (1986), Hart and Moore (1990) and Hart (1995). In this setting, the service is well defined and contracts are highly incentivized; the extent of non-contractible quality is limited; there is a substantial competition for contracts; current performance may have consequences for future procurement; and there is a substantial capacity for innovation. While our paper captures the effect of private placement services relative to the PES, we would ideally like to contrast these to the value-added of the PES. With a highly efficient PES, positive effects of private placement would be more indicative of technology innovation, than if the PES was operating very inefficiently. Regrettably, it is not possible to evaluate the value-added of the PES in the Swedish setting, since essentially all unemployed are treated by the PES (Forslund and Vikström, 2011). Still, our relative results give guidance to policy makers on where to spend marginal resources on placement services. Our results indicate that private job placement agencies innovate the business in the sense that they use a more labor intense technology when providing employment services; unemployed at private providers meet their case worker 2.4 times as often. The job-seekers also felt that they received more help in improving their job search strategies and more help in finding vacancies, than those at the PES. In general, unemployed at private placement agencies were more satisfied with their case worker. This more frequent interaction with the case worker resulted in a higher job search intensity for adolescents at a private provider; they initiated more contacts with prospective employers, applied for more jobs, and were called to more interviews than had they been at the PES. Adolescents at the PES, on the other hand, spent more time in job training at employers and internships. Thus, the difference in job search intensity for adolescents may in part be driven by lower job search effort among program participants at PES (locking-in effects). This increased interaction with case workers did not significantly improve the overall chances of finding a job for unemployed at private placement agencies; still the point estimates are consistent with substantial effects. There are however important heterogeneities; private providers improved the chances of finding employment and increased earnings for immigrants. We also find some support for private providers having a negative effect on earnings and hours worked for adolescents; particularly after the end of the intervention period. Apart from differences in the type of job search assistance received, the divergent results for immigrants and youths may also be driven by differences in economic incentives and regulations between public and private providers. The positive effects of private placement services for immigrants are particularly large at the end of the intervention period (six first months after randomization) when contractors had strong incentives to find employment for the job seeker in order to obtain full payments. This may indicate that the marginal product of effort, from the placement agencies perspective, was highest for this group. Immigrants are at disadvantage, partly because they may have fewer contacts on the Swedish labor market. In particular, such contacts may be exhausted when being unemployed. Since private providers work actively with helping job seekers to initiate contacts with employers, they may be particularly productive for immigrants. The potentially negative effects on employment and wage earnings for adolescents at private placement agencies come despite the fact that they applied for more jobs and attended more job interviews. The way we can reconcile this apparent paradox, is that adolescents at the PES received more job training and had more internships, and that these may have generated the necessary interaction with employers to secure employment. It is interesting to note that the OLS-estimates are much more negative (less positive) than the IV-estimates, given that we cannot characterize the compliers as weaker on the labor market based on the observable characteristics. Hence, the difference between the OLS- and IV-estimates suggests that compliers are negatively selected on unobservable characteristics; that is, that individuals who chose to switch to the private placement agencies are those with bad unobservable re-employment prospects. Since these individuals would fare worse than average if remaining at the PES, they may be more likely to benefit from placement services provided by private agencies; that is, the selection to private placement agencies would be based on rational expectations on high returns. If this indeed was the case, the overall effects would be smaller if private placement services were made universal. However, we do not know the effect for non-compliers in our setting. The general conclusion from our study is that one size does not fit all. Even if the ex-ante case for contracting out employment services in the present setting is strong we do not find any definite support for an overall effect. There is a substantial heterogeneity, however, which suggests that one has to be careful when deciding on which services to produce in-house and which to contract out.