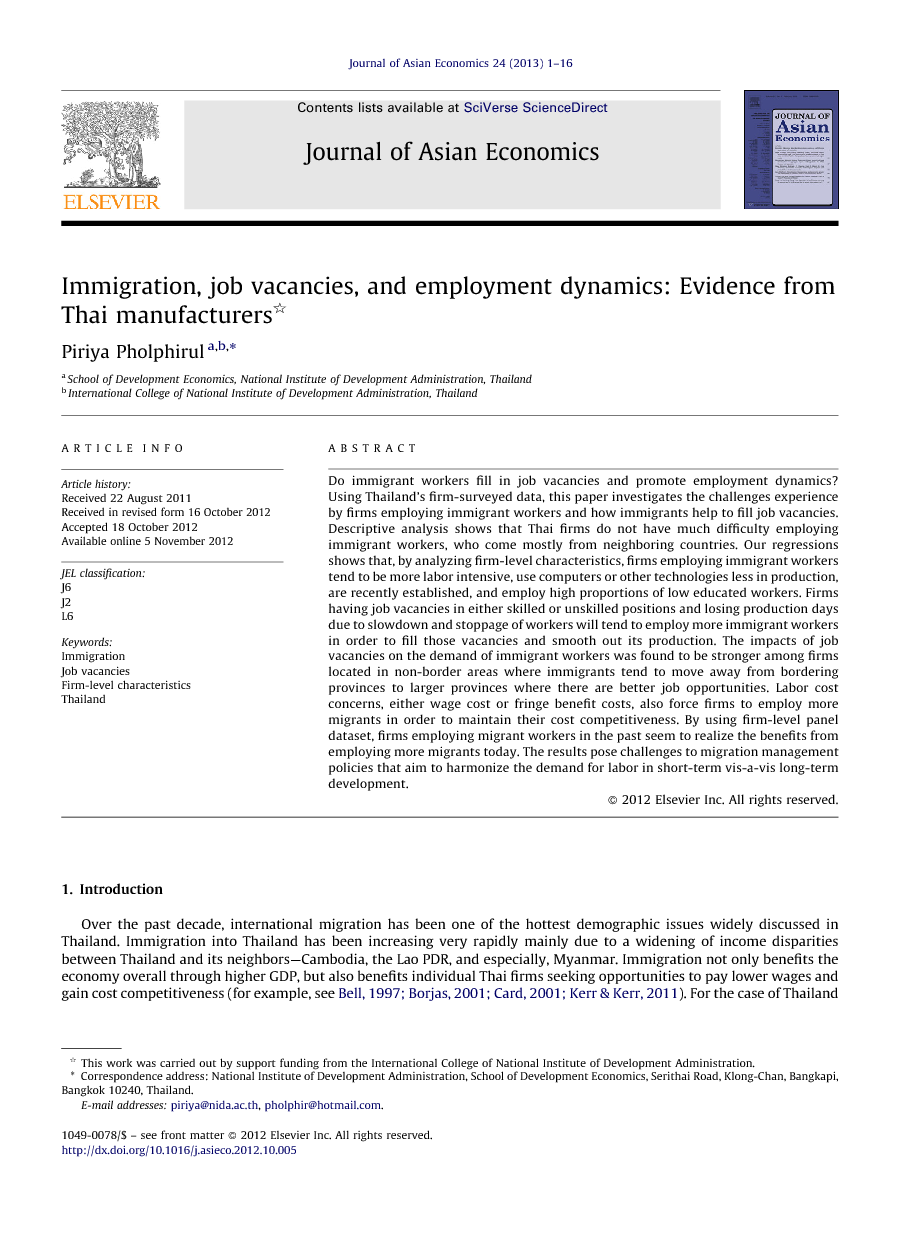 Do immigrant workers fill in job vacancies and promote employment dynamics? Using Thailand's firm-surveyed data, this paper investigates the challenges experience by firms employing immigrant workers and how immigrants help to fill job vacancies. Descriptive analysis shows that Thai firms do not have much difficulty employing immigrant workers, who come mostly from neighboring countries. Our regressions shows that, by analyzing firm-level characteristics, firms employing immigrant workers tend to be more labor intensive, use computers or other technologies less in production, are recently established, and employ high proportions of low educated workers. Firms having job vacancies in either skilled or unskilled positions and losing production days due to slowdown and stoppage of workers will tend to employ more immigrant workers in order to fill those vacancies and smooth out its production. The impacts of job vacancies on the demand of immigrant workers was found to be stronger among firms located in non-border areas where immigrants tend to move away from bordering provinces to larger provinces where there are better job opportunities. Labor cost concerns, either wage cost or fringe benefit costs, also force firms to employ more migrants in order to maintain their cost competitiveness. By using firm-level panel dataset, firms employing migrant workers in the past seem to realize the benefits from employing more migrants today. The results pose challenges to migration management policies that aim to harmonize the demand for labor in short-term vis-a-vis long-term development.

Over the past decade, international migration has been one of the hottest demographic issues widely discussed in Thailand. Immigration into Thailand has been increasing very rapidly mainly due to a widening of income disparities between Thailand and its neighbors—Cambodia, the Lao PDR, and especially, Myanmar. Immigration not only benefits the economy overall through higher GDP, but also benefits individual Thai firms seeking opportunities to pay lower wages and gain cost competitiveness (for example, see Bell, 1997, Borjas, 2001, Card, 2001 and Kerr and Kerr, 2011). For the case of Thailand as a regional migrant-receiving country, different economic tools have been used, but all have provided similar results, such as the analyses done by Sussangkarn (1996), Martin (2007), and Pholphirul and Rukumnuaykit (2010).1 Even though employing immigrants can boost GDP growth and investment, these benefits are unevenly distributed and mainly go to the owners of capital (i.e., firm owners and employers) and the immigrants themselves, while native workers are considerably jeopardized (Pholphirul & Rukumnuaykit, 2010). A number of empirical studies suggest that immigration does indeed reduce native wages and harms the employment prospects of Thai workers.2 Even though these effects tend to be rather small, they could be significant for those unskilled or low-educated Thais who can be easily replaced by immigrant workers. If classification by skills and education is considered, the adverse impacts on Thai workers from immigration are much larger for young and low-skilled workers (see Lathapipat, 2010, Ottaviano and Peri, 2006 and Ottaviano and Peri, 2008 for the case of Thailand). There has been some cost–benefit analysis of employing migrant workers in a migrant-receiving county such as Thailand. However none have none of them have empirically tested the roles of immigration from the perspective of labor demand, and none by analyzing firm-level data. Since Thailand is now facing a more competitive world market, the nation must change its development strategy from labor-intensive industries to more value-added types of production. The demand for unskilled labor remains high due to the need to maintain cost competitiveness, especially in global markets. A significant demand for both highly skilled and semi- to low-skilled workers creates supply-demand gaps in the Thai labor market. Job vacancies play an important role in any analyses of labor markets and employment. How well the labor market adjusts to this demand pattern is crucial to economic development as well as to the welfare of Thai laborers. It also challenges Thai employers to overcome these gaps.3 Even though it is already commonly believed among employers that immigration should helps firms fill such vacancies quickly, this argument has never been empirically and statistically tested. Therefore, it is worthwhile to examine how immigration helps to reduce vacancies and to promote employment dynamics. Even though the demand for immigrant workers in manufacturing may not be as obvious as it is in agriculture and the service industry, smoothing production to maintain workflows and avoid labor shortages is always a major concern.4 To be more specific, this paper will first analyze the challenges facing Thai manufacturing firms in seeking to hire immigrant workers. Second, given such constraints, the magnitude of migrant share can be determined by firm-level characteristics, labor shortages, job vacancies, and cost concerns.5 The findings of this empirical examination should help policymakers understand how the labor market will react given the substantive increase in the labor supply due to immigration. The findings can also inform labor-market policies as to how migration can best be managed. In the next section, the broader context of labor migration in Thailand will be examined. Section 2 discusses the perception of Thai firms regarding the challenges of employing foreign immigrant workers. Then, in Section 3, the role of immigration in filling job vacancies and promoting employment dynamics is explained. Section 4 discusses the findings and presents the conclusions.

This paper describes the importance of employing migrant workers to help smooth work flows. This is particularly true in sectors and industries with labor-intensive production, where job vacancies in the labor market can cause uncertainty about output production. From the firm's perspective, employing migrants helps to stabilize the labor supply in these sectors, to fill vacancies, and to prevent uncertainties about production. Do immigrant workers fill job vacancies and promote employment dynamics? Using Thailand's firm-survey data, this paper investigates the challenges of immigrant worker employment across various types of firms and how such employment can help to fill job vacancies. Descriptive analysis shows that Thai firms do not have much difficulty in employing immigrant workers, who mostly come from neighboring countries. Our regressions show, by analyzing firm-level characteristics, that the firms employing immigrant workers tend to be more labor intensive, use less computer or technology in production, are newly established, and employ a high proportion of low-educated workers. Firms facing job vacancies in either skilled or unskilled positions and losing production days due to slowdowns and stoppages of workers tend to employ more immigrant workers in order to fill those vacancies and smooth production. Impacts of job vacancies on the demand for immigrant workers are found to be stronger among firms located in non-border areas, where immigrants tend to move because of better job opportunities. Labor cost concerns, either wage costs or fringe benefit costs, also force firms to employ more migrants in order to maintain the cost competitiveness of their products. Such benefits seem also to encourage the employment of more migrants in the future. This paper, by using panel a firm-level dataset, also investigates the positive relationship of firms employing migrants in the past and the likelihood that they will employ migrant workers in the present, especially unskilled ones. However, there are not any significant effects from skilled/unskilled vacancies, worker slowdowns and stoppages, and concerns over workers’ wages and benefits on the employment of skilled/unskilled migrant workers from estimating fixed-effect panel firms. Since job vacancies need to be filled urgently, a policy promoting temporary immigration recruitment could help. Many argue that temporary recruitment provides more flexibility in the labor market and is not a serious threat to social cohesion. Temporary migration allows Thailand to meet labor needs more flexibly across business cycles. For migrants themselves, a temporary program would provide low-income migrants better access to the external labor market and maximize the return to their countries of origin. Temporary migrants usually remit more, retain closer links to their homes, and transfer freshly acquired skills from Thailand. At the bilateral level, Thailand and the three migrant-sending countries should better coordinate and align migration polices with their national development objectives. Bilateral agreements provide a number of benefits, including flexibility to address policy objectives and issues as prioritized by the respective two countries that align with national development plans. This collaboration should aim to increase public awareness of migration benefits, foster regularization of immigration processes, and promote formal transfer mechanisms for remittances. Offering more flexible entry regimes and more promising long-term opportunities in attracting skilled immigrants should also be taken into consideration. Both tax and non-tax incentives, including the launching of a temporary program to employ foreign workers, can be attractive measures. Under this strategy, the government could project both labor demand and supply for both the short and long terms by skill categories and geographical areas, and prepare a list of skill shortages. Even so, achieving short-term goals on employing migrants does not guarantee that longer-term objectives will be secured. A middle-income country like Thailand has a somewhat larger inflow of unskilled workers that can be used effectively, but fewer foreign skilled workers. The results pose challenges to migration management policy, which aims to harmonize labor demand vis-a-vis long-term development toward better living standards. While moving toward an innovation-driven economy is among the top priorities of long-term development goals announced by the Thai authorities, implementing cost-saving strategies by employing cheap migrants tends to divert the country from productivity-enhanced activities. Promoting R&D investment within Thai firms, securing intellectual property rights, and increasing the value added to goods and services could be an immediate response. This can be achieved by promoting capital and innovative-intensive production technologies, adopting technology into labor-intensive production, such as agriculture, agro-business and farming products, and textiles and garments. Without question, value-added goods and services will confer more competitive advantage and sustained global competitiveness than relying on cheap labor costs from immigrant workers.