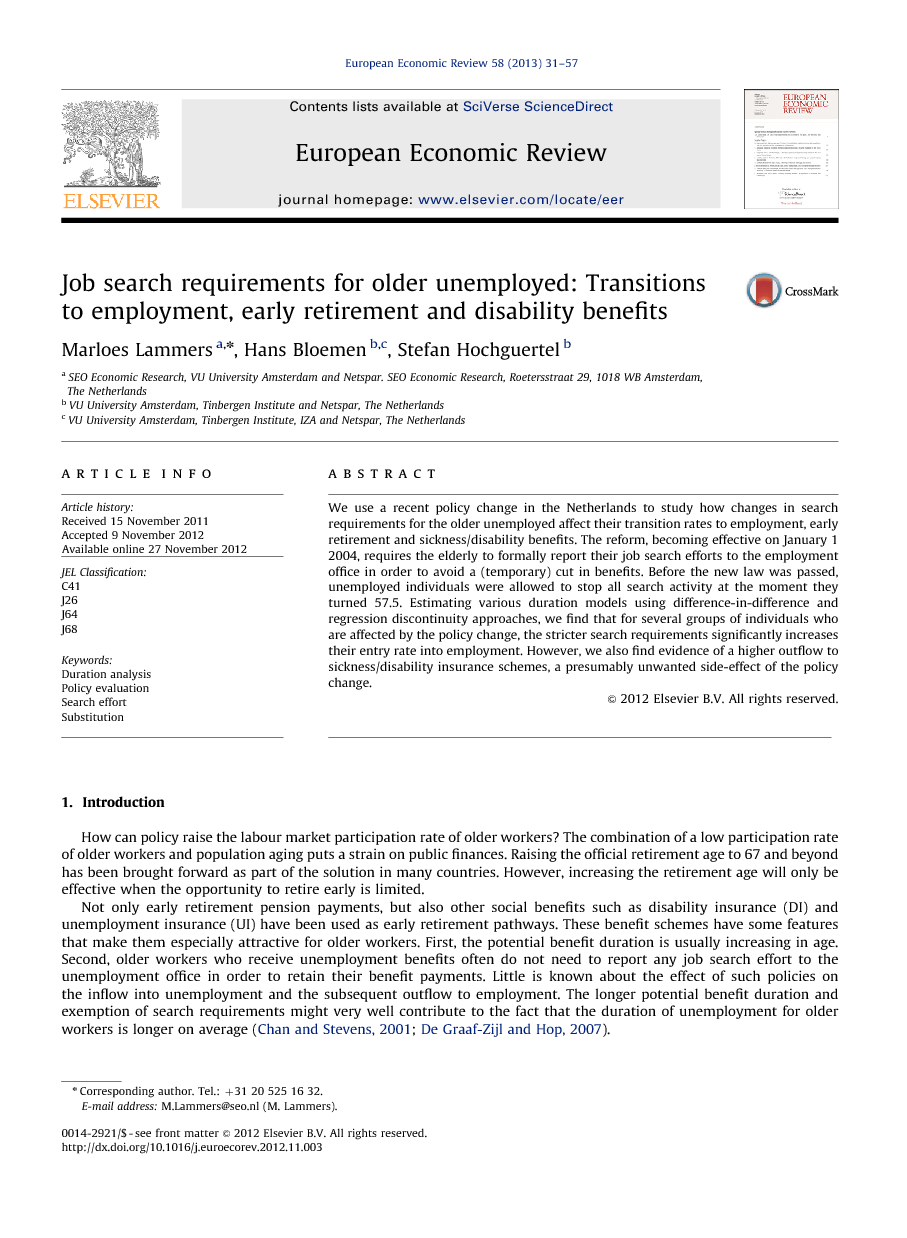 We use a recent policy change in the Netherlands to study how changes in search requirements for the older unemployed affect their transition rates to employment, early retirement and sickness/disability benefits. The reform, becoming effective on January 1 2004, requires the elderly to formally report their job search efforts to the employment office in order to avoid a (temporary) cut in benefits. Before the new law was passed, unemployed individuals were allowed to stop all search activity at the moment they turned 57.5. Estimating various duration models using difference-in-difference and regression discontinuity approaches, we find that for several groups of individuals who are affected by the policy change, the stricter search requirements significantly increases their entry rate into employment. However, we also find evidence of a higher outflow to sickness/disability insurance schemes, a presumably unwanted side-effect of the policy change.

As the challenges associated with an ageing population become more prominent and many countries increase statutory retirement age, it becomes all the more important to document the effects of labour market policies on behaviour of older workers. This paper deals with one such policy change which has recently been implemented in various countries, namely the imposition of job search requirements for older unemployed. Using a large administrative database covering all wage and benefit payments to Dutch individuals in the years 1999–2005, we show the effects of a tightening of search requirements which is specifically aimed at older workers. A policy reform, coming into effect on the 1st of January 2004, makes an end to the special treatment of older unemployed individuals. Before the law was initiated, an unemployed individual aged 57.5 did not need to report his/her job search effort to the unemployment office. The new policy required older unemployed to continue actively searching for a job even after turning 57.5. Using difference-in-difference and regression discontinuity techniques within a flexibly specified duration framework, we estimate the effect of this reform on outflow to jobs, early retirement and disability benefits for the various affected groups of individuals aged 55.5 to 59.5. The main finding is that within 24 months after the start of an unemployment spell, there is a 6 (11) percentage points increase in the number of male (female) individuals that find a job. However, this strong effect on labour market participation is accompanied by a 4 (9) percentage point increase in the number of male (female) individuals who use DI benefits as an alternative exit route. In light of the evidence that UI benefits and DI benefits are alternative pathways to early retirement, one would expect outflow to retirement to increase as well. However, changes in the UI and in the early retirement system cannot be completely separated, and therefore we cannot provide evidence for an increased outflow to early retirement. These conclusions are remarkably robust: using various sources of variation generated by the policy change we show strong effects of search requirements for the older unemployed on their chances to find jobs, and their probability to receive DI payments. Moreover, the same results are found in many types of alternative regression specifications. The finding that unemployed individuals substitute between receipt of UI benefits and DI benefits can be expected to hold in many countries. The exact magnitude of both the job finding effect and the substitution effect likely differs according to institutional settings such as the way in which stricter rules are enforced, the height of penalties, and the attractiveness of other social schemes. An interesting venue for further research is to estimate the contribution of these parameters to the gross effect presented in this paper. Another suggestion for further research is to estimate the impact of search conditions on after-unemployment job characteristics. Theory predicts that an increase in search costs will decrease reservation wages and might therefore lock the older workers into low-skilled and low-paid jobs, another unwanted side-effect of a policy that is meant to induce older workers to become more active and productive labour market participants.