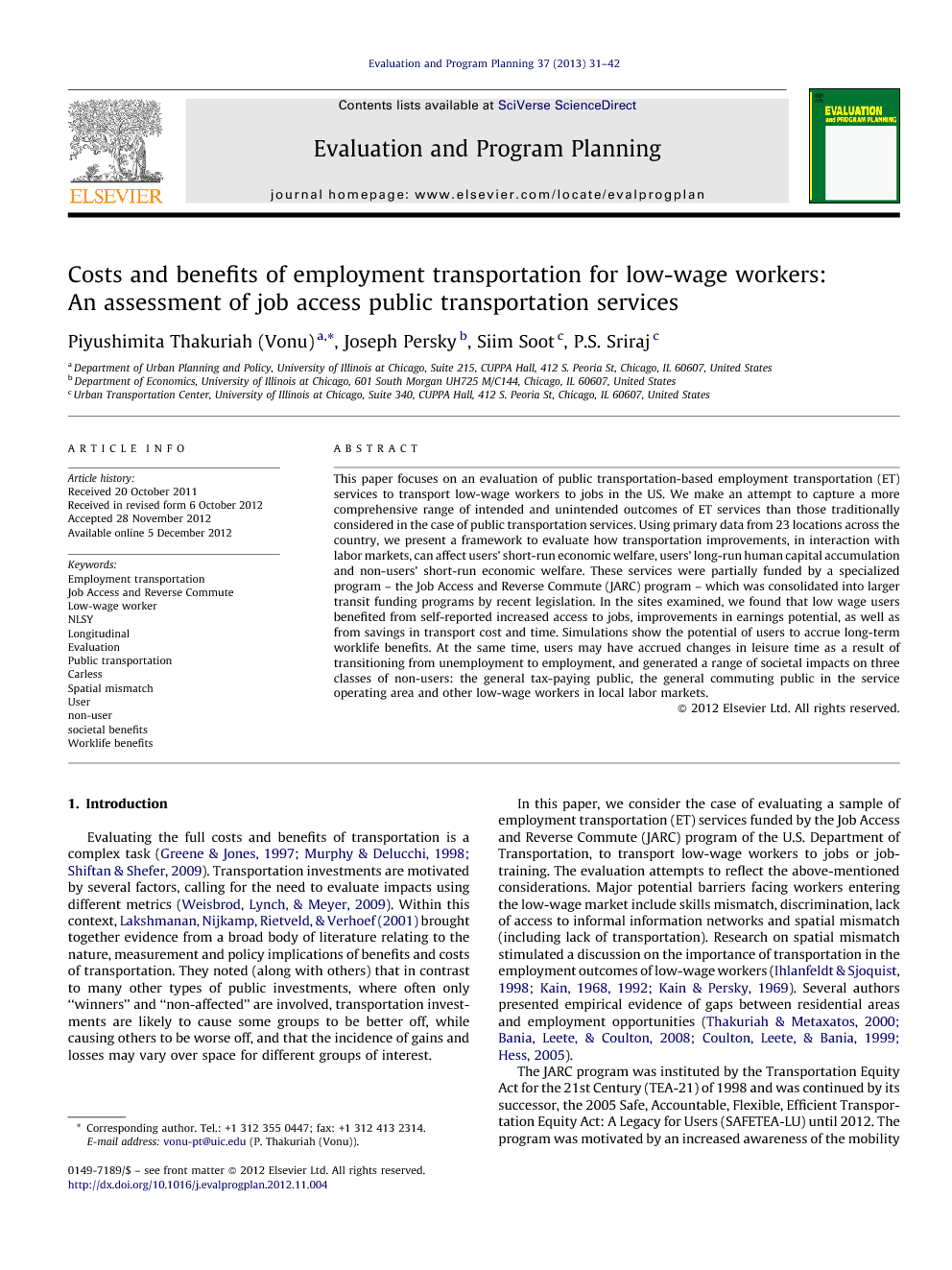 This paper focuses on an evaluation of public transportation-based employment transportation (ET) services to transport low-wage workers to jobs in the US. We make an attempt to capture a more comprehensive range of intended and unintended outcomes of ET services than those traditionally considered in the case of public transportation services. Using primary data from 23 locations across the country, we present a framework to evaluate how transportation improvements, in interaction with labor markets, can affect users’ short-run economic welfare, users’ long-run human capital accumulation and non-users’ short-run economic welfare. These services were partially funded by a specialized program – the Job Access and Reverse Commute (JARC) program – which was consolidated into larger transit funding programs by recent legislation. In the sites examined, we found that low wage users benefited from self-reported increased access to jobs, improvements in earnings potential, as well as from savings in transport cost and time. Simulations show the potential of users to accrue long-term worklife benefits. At the same time, users may have accrued changes in leisure time as a result of transitioning from unemployment to employment, and generated a range of societal impacts on three classes of non-users: the general tax-paying public, the general commuting public in the service operating area and other low-wage workers in local labor markets.

Evaluating the full costs and benefits of transportation is a complex task (Greene and Jones, 1997, Murphy and Delucchi, 1998 and Shiftan and Shefer, 2009). Transportation investments are motivated by several factors, calling for the need to evaluate impacts using different metrics (Weisbrod, Lynch, & Meyer, 2009). Within this context, Lakshmanan, Nijkamp, Rietveld, & Verhoef (2001) brought together evidence from a broad body of literature relating to the nature, measurement and policy implications of benefits and costs of transportation. They noted (along with others) that in contrast to many other types of public investments, where often only “winners” and “non-affected” are involved, transportation investments are likely to cause some groups to be better off, while causing others to be worse off, and that the incidence of gains and losses may vary over space for different groups of interest. In this paper, we consider the case of evaluating a sample of employment transportation (ET) services funded by the Job Access and Reverse Commute (JARC) program of the U.S. Department of Transportation, to transport low-wage workers to jobs or job-training. The evaluation attempts to reflect the above-mentioned considerations. Major potential barriers facing workers entering the low-wage market include skills mismatch, discrimination, lack of access to informal information networks and spatial mismatch (including lack of transportation). Research on spatial mismatch stimulated a discussion on the importance of transportation in the employment outcomes of low-wage workers (Ihlanfeldt and Sjoquist, 1998, Kain, 1968, Kain, 1992 and Kain and Persky, 1969). Several authors presented empirical evidence of gaps between residential areas and employment opportunities (Thakuriah and Metaxatos, 2000, Bania et al., 2008, Coulton et al., 1999 and Hess, 2005). The JARC program was instituted by the Transportation Equity Act for the 21st Century (TEA-21) of 1998 and was continued by its successor, the 2005 Safe, Accountable, Flexible, Efficient Transportation Equity Act: A Legacy for Users (SAFETEA-LU) until 2012. The program was motivated by an increased awareness of the mobility barriers experienced by low-wage, carless workers and by programmatic considerations following the passage of the Personal Responsibility and Work Opportunity Reconciliation Act of 1996 or the welfare reform act. At that time, a renewed emphasis was placed on the need for special transportation programs to assist in job accessibility and to improve the employment outcomes of low-wage workers. Recently, as a part of overall transportation program consolidation by the 2012 surface transportation legislation, Moving Ahead for Progress in the 21st Century (MAP-21), JARC was repealed as a stand-alone program and JARC-eligible activities are incorporated into federal urbanized and rural area transit formula programs. The services considered in this paper were partially funded by the JARC program under TEA-21 and financially matched by other sources (including state and local human services and workforce development agencies, and private and non-profit organizations). ET systems are special public transportation services that connect low-income areas to job-rich areas, auto-loan programs, travel training programs, mobility information services, and other services that address the transportation barriers faced by low-wage workers. The paper specifically evaluates ET public transportation services based on bus (Fixed-Route, FR) and van (Demand-Response, DR) services, using empirical data from 23 services located in different parts of the country in 2002. Between 1999 and 2002, the Federal Transit Administration (FTA) of the US DOT, spent approximately $27 million on the program, and during 2002, close to 94% of all program funds were spent on such services. The program gave local organizations considerable flexibility in designing, targeting and administering programs that suit the local context. Distinguishing characteristics of the program as a whole were that the services are intended to fill gaps in existing transportation services and that services were to be designed by transportation agencies in partnership with workforce development boards, labor organizations, human services agencies and other public, private and non-profit organizations involved in planning, financing and operating such services, as part of a Coordinated Human Services Transportation Plan (FTA, 2007). As noted by Thomopoulos, Grant-Muller, & Tight (2009) and Weisbrod, Lynch & Meyer (2009), incorporating equity considerations in the evaluation of transportation infrastructure has regained interest in recent years. Public transportation in general plays a social service role for individuals with no cars or with limited means to operate cars, including low-income individuals, persons with disabilities, young people and others (Lewis & Williams, 2000). However, ET services are required where traditional public transportation systems do not operate or are not cost-effective to operate. The motivation for these programs stem from the fact that without such investments, low-wage workers may face significant barriers to being employed, resulting in continued dependence on public assistance, unemployment benefits or other types of aid, lack of upward mobility, and potentially chronic or episodic poverty over a longer time frame, requiring other types of social services. A review of 140 studies of welfare reform by the author's research team revealed that transportation was consistently cited as being a barrier to employment, a reason for staying on public assistance, or a reason for quitting the latest job. The paper is organized as follows: in Section 2 we present background information on the factors motivating the CBA framework. In Section 3, details on the methodology are presented, including data sources and the benefit and cost metrics considered. Results are given in Section 4. Conclusions are given in Section 5 and the major limitations of the approach are summarized in Section 6.

This paper presents an integrated CBA framework for public transportation services that captures a more comprehensive range of intended and unintended outcomes, allowing us to evaluate how transportation improvements, in interaction with labor markets, may affect non-users’ short-run economic welfare, users’ short run economic welfare, and users’ long-run human capital accumulation. We found that although ET services provide valuable service to users, both in terms of self-reported user access to jobs as well in estimated changes in net user incomes. Not including a broad range of factors such as changes in leisure time or labor market impacts may lead to an overestimation of user and societal benefits while not including potential long-term effects may underestimate user benefits. Although program costs are high, benefits to the users are high as well. For every dollar of program cost, the net user benefits are $1.9. The B/C ratio varies considerably by type of user, type of location where the service is operating and type of service. It also varies by the manner in which the analysis treats the opportunity costs of time – when we factor in the value of leisure time foregone by transitioning from a state of joblessness to work, the B/C ratio is estimated to drop from $1.9 to $1.6. As in any Cost–Benefit Analysis (CBA), the magnitude of the benefits to users or non-users depend on the assumptions regarding who is affected and who is not. When only the benefits to the tax-paying public and commuters in the region alone are considered, for every dollar of ET investment, there is a return of about $1.5 to non-users, due to changes in income taxes generated by the users, alternative use of taxpayer funds on welfare and other public assistance payments, as well as the external costs of non-transit modes of transportation that might have been previously used. Societal benefits are close to $3.5 when users’ value of leisure time foregone are not taken into account; societal benefits drop to $3.1 when estimates of such user impacts are taken into account. Non-users and society in general benefit due to potential alternative uses of tax dollars and avoidance of societal costs of private automobiles, which users might otherwise have taken. The negative impacts on local labor markets are likely to cancel out some of these non-user and societal benefits. However, since these negative impacts are dependent on local unemployment rates, the non-user benefits from these services are ultimately likely to depend on economic cycles. The benefits have a likelihood of persisting over time, should the services continue to offer reliable transportation and the other assumptions of the study hold true, jump-starting a wage growth trajectory that may persist over the individual's worklife. The major assumption here is that the sampled ET service users will follow the same economic trajectory (employment and unemployment spells, wages and earnings, education and job training) as a large sample of low-wage respondents with reliable transportation in the NLSY79, over the economically formative years of their lives. We have projected that average worklife benefit to base year program cost is $15.87, i.e., every dollar spent in these employment transportation services in the base year is expected to catalyze a return of about $15 in the future, over the remainder of the users’ worklife. The implication is that future societal costs would be avoided as a result of the boost to worklife outcomes afforded by these services. Our empirical analysis has shown that it is not likely that many users will stay in the transit system over the long haul but that the transient boost that these services provide to worker mobility may make a significant difference in their lives and their work.