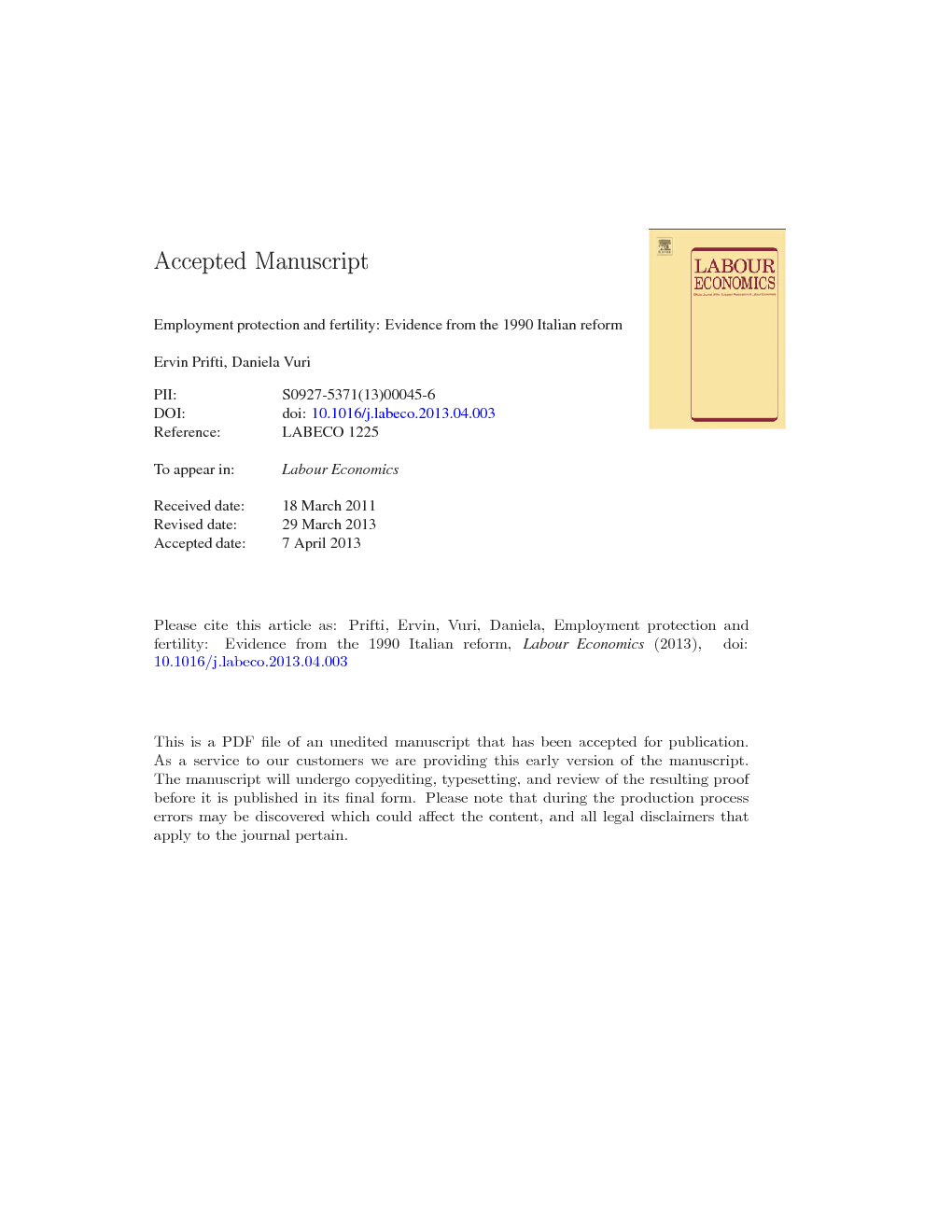 The aim of this paper is to investigate the effect of Employment Protection Legislation (EPL) on fertility decisions of Italian working women using administrative data. We exploit a reform that introduced in 1990 costs for dismissals unmotivated by a ’fair cause’ or ’justified motive’ in firms below 15 employees and left firing costs unchanged for bigger firms. We use this quasi-experimental setup to study the hypothesis that increased EPL reduces future job insecurity and positively affects a female worker’s proneness to take childbearing decisions. We use a difference in difference (OLS-DID) model to control for possible period-invariant sorting bias and an instrumental variable (IV-DID) model to account for time-varying endogeneity of the treatment status. We find that reduced economic insecurity following a strengthening of the EPL regime has a positive and sizable effect on fertility decisions of Italian working women. This result is robust to a number of checks regarding possible interactions with other policy reforms occurring around 1990, changes in the sample of workers and firms, and use of an alternative set of exclusion restrictions. We would like to thank John Ermisch, Andrea Ichino, Marco Leonardi, Andrea Salvatori, Mark Taylor, Vincenzo Scoppa and seminar participants at the Brucchi Luchino Workshop 2010 (Padua), the Joint Empirical Social Science (JESS) Seminars 2010 (ISER), the Labour Lunch at the University of Tor Vergata, the Labor Economics Seminar 2012 (Austria), the CESifo Area Conference on Employment and Social Protection 2011 (Munich), the Co-Editor Bas van der Klaauw and two anonymous referees for useful comments and suggestions. We acknowledge Laboratorio Revelli (Turin) for providing the WHIP dataset. Any error is the authors’ sole responsibility.

Low fertility has plagued developed South European nations since the early eighties with significant economic and fiscal implications. Economic insecurity stemming from unstable job prospects is considered one of the causes pushing women to defer childbearing until full integration in the labor market (OECD Employment outlook, 2000). The existing research on the consequences of economic insecurity on childbearing decisions has focused on the effects of an exiguous set of labor market variables such as past unemployment spells, fixed-term contracts and earnings levels. There may be other unexplored channels through which economic uncertainty may influence fertility decisions. In this paper we shed some light on the effects of Employment Protection Legislation (EPL, henceforth), considered as a major booster of economic security, on the fertility decision of Italian working women. To this purpose, we exploit a quasi-experimental setup created by a law passed in 1990 that for the first time introduced EPL in small firms (less than 15 employees) but left the protection regime for larger firms unchanged. The differential application of the law according to firm size creates variation of EPL through time and across firms and provides a credible basis for inference. Italy is an interesting case because during the ten years surrounding the time of the EPL reform it experienced the lowest fertility rate in the EU area with 1.25 children on average per women lagging well behind the replacement level of 2.1 (Eurostat, various years). During the same period Italy had in place the fourth strictest EPL regime in the EU but its application was restricted to firms with more than 15 employees (OECD Employment outlook, 2004). This created a sharp contrast with small firm workers who were totally exempted from any kind of protection and could be easily fired with no advance notice or severance payment. Given that almost 95% of the productive system in Italy is made up of small firms which employ nearly 60% of the total number of workers, a large share of the working force falls short of any job protection (Italian National Institute of Statistics, various years). The lack of job protection exposes women to a higher risk of losing their jobs and may have several consequences like for example severely restricting access to house mortgages. Given that the reproductive decision is the last of a series of steps aimed at the gradual construction of stability, like completing education, getting a stable job and buying a house, having an insecure job pushes women to avoid childbearing while still facing high economic uncertainty about their future. In relation to this, Kugler and Pica (2008) show that the 1990 EPL reform reduced the risk of losing the job. In particular, separations fall by a significant 15% because jobs became harder to destroy. We build on this result and look at how reduced economic uncertainty induced by the strengthening of employment protection affected fertility behavior after the 1990 reform. Our study contributes to the existing literature on the economic insecurity and fertility decisions in two ways. First, to the best of our knowledge, no study has looked at the effects of EPL on fertility. Second, we study the relationship between this indicator of economic insecurity, as measured by EPL, and fertility decisions in a causal setup with individual data. We are able to identify the effects of EPL comparing fertility choices of small versus large firms' workers before and after the law change, thus using a Difference-in-Difference (DID) approach. One natural concern, in our case, is the endogeneity of the treatment status, stemming from deliberate self-selection of workers into one of the EPL regimes created by the reform. In this paper we explicitly address this concern and isolate a causal pathway from employment protection to childbearing decisions. Initially we use a linear specification of the DID estimator which can account for the endogeneity of the treatment status under the assumption of period-invariant sorting bias. Then we use an IV approach to purge the estimated effects from the selection bias arising from the possible correlation of the treatment status with time varying unobserved heterogeneity. We extensively discuss the identifying assumptions of the two estimators and provide suggestive evidence as well as perform formal tests of their validity. Our main conclusion is that strengthening the EPL increased significantly the probability of having a baby and this result is robust across model specifications and estimation procedures. The rest of the paper is organized as follows. Section 2 presents a summary of previous research on this topic. Section 3 gives a picture of the institutional aspects of the Italian labor market that brought to the 1990 reform. In Section 4 the econometric methods are discussed in depth while in Section 5 we describe the data used in this study. Section 6 presents the results and Section 7 concludes.

This paper exploits a quasi-natural experiment to estimate the impact of an increase in employment protection on Italian working women's fertility decisions. Despite intense public debate on both employment protection provisions and worryingly low fertility levels in Italy and other South European countries, to date we know little about how the propensity to childbearing of working women is affected by the level of protection of their job positions. To the best of our knowledge this paper is the first to bridge the gap between these two phenomena and to isolate a distinct causal pathway from EPL to fertility decisions. We hypothesize two possible ways an EPL increase is channeled through to fertility decisions of working women: access to credit and economic insecurity. By improving access to house mortgages and reducing future economic insecurity feelings, job protection acted as a baby booster for Italian working women. The evidence presented suggests that there is a positive and sizable effect of increased EPL on fertility. Results indicate that the reform increased the propensity to have a baby by a significant 0.9–2.5 percentage points. We present a wide body of informal evidence and a series of formal tests meant to reassure us that the identifying assumptions of the DID are met and that bias is not driving the results. However, some variability in the estimated affects across methods of estimation and specifications suggests caution on drawing sharp conclusions on the magnitude of the effects. A second caveat concerns the interpretation of the results and relates to the fact that only private sector workers are sampled. This implies that we cannot investigate the effect of EPL on the fertility behavior of the entire population but only on women working in the private sector, thus limiting the external validity of our analysis.