عنوان انگلیسی
Foreign-owned firms around the world: A comparative analysis of wages and employment at the micro-level
دانلود فوری مقاله + سفارش ترجمه 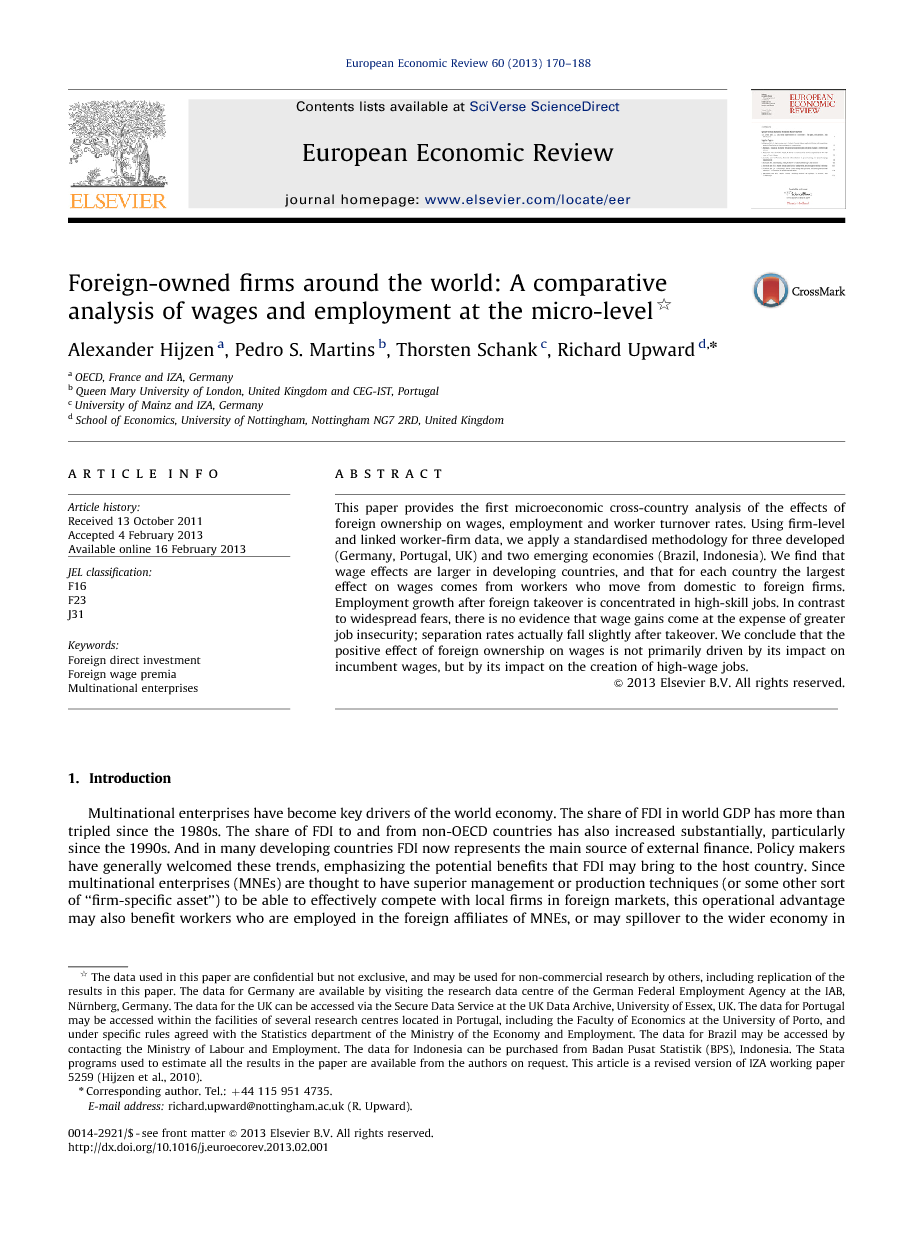 This paper provides the first microeconomic cross-country analysis of the effects of foreign ownership on wages, employment and worker turnover rates. Using firm-level and linked worker-firm data, we apply a standardised methodology for three developed (Germany, Portugal, UK) and two emerging economies (Brazil, Indonesia). We find that wage effects are larger in developing countries, and that for each country the largest effect on wages comes from workers who move from domestic to foreign firms. Employment growth after foreign takeover is concentrated in high-skill jobs. In contrast to widespread fears, there is no evidence that wage gains come at the expense of greater job insecurity; separation rates actually fall slightly after takeover. We conclude that the positive effect of foreign ownership on wages is not primarily driven by its impact on incumbent wages, but by its impact on the creation of high-wage jobs.

Until recently, the empirical literature on the role of foreign ownership on wages was characterised by a consensus that foreign-owned firms pay higher wages than domestic firms and that foreign-wage premia are particularly important in emerging economies. This consensus was, to a large extent, based on evidence that identifies the role of foreign ownership on average wages by focusing on cross-border takeovers using longitudinal firm-level data. This paper provides consistent and systematic cross-country evidence which helps to sharpen and qualify the consensus in the literature. First, this paper applies a standardised methodology to firm-level data for three developed countries and two large emerging economies. The results confirm that foreign-owned firms offer higher average wages than their domestic counterparts in all five countries. Moreover, consistent with the conventional wisdom, foreign-wage premia appear to be particularly important in emerging economies. Foreign-wage premia in the three developed countries are consistently below 10% (between 2% and 8%) and foreign-wage premia in the two emerging economies in the range of 15% to 20%. While there are enormous differences in scale between foreign and domestic firms, particularly in the two developing countries, there is a less systematic relationship between employment growth and the foreign takeover of domestic firms. In some countries takeovers are associated with quite large increases in employment (Portugal, Indonesia) while in others (Germany, the UK and Brazil) there are no such scale effects. We find that employment effects of foreign takeovers are always positive for high-skill employment and usually negative for low-skill employment. Second, this paper shows that the conventional wisdom overstates the true wage premium, but also that it remains qualitatively valid after controlling for composition bias. Using linked worker-firm data suggests that foreign wage premia are much smaller than previously believed: foreign-wage premia range from 1% to 6% in all the four countries analysed and, in some cases, the effect becomes insignificantly different from zero. Foreign-wage premia are still more important in emerging economies, although one should be careful in drawing strong conclusions as the worker-level analysis only involves one emerging economy (Brazil). The difference between the firm and worker level estimates of foreign wage premia indicates important changes in the composition of the workforce, which is largely consistent with the employment effects by skill-group. Thus, by focusing on incumbent workers, the worker-level analysis excludes a key channel, perhaps even the main one, through which foreign takeovers may affect workers. Third, this paper shows that foreign-wage premia associated with worker movements from domestic to foreign firms may be economically important and that such movements may be more beneficial for workers in less developed countries (in the order of 6% to 10% for the three developed countries and over 16% in Brazil). The results on worker mobility suggest that the difference between the firm and worker-level estimates of foreign wage premia may not just be due to compositional changes in the workforce, but also capture the greater importance of foreign ownership for the wages of new hires as opposed to incumbent workers. Moreover, to the extent that substantial wage differences between similar workers within firms may be hard to sustain one would expect the positive effects of foreign ownership to new hires to trickle down to the rest of the workforce with time. The positive wage and employment effects of foreign takeovers do not appear to be compensated by a reduction of job security. Although some authors have argued that multinationals are inherently “footloose”, or that jobs in multinationals may be less secure, our results indicate consistently small but negative effects on separation rates, consistent with theories which stress the role of higher wages in preventing worker movement and associated spillover effects.