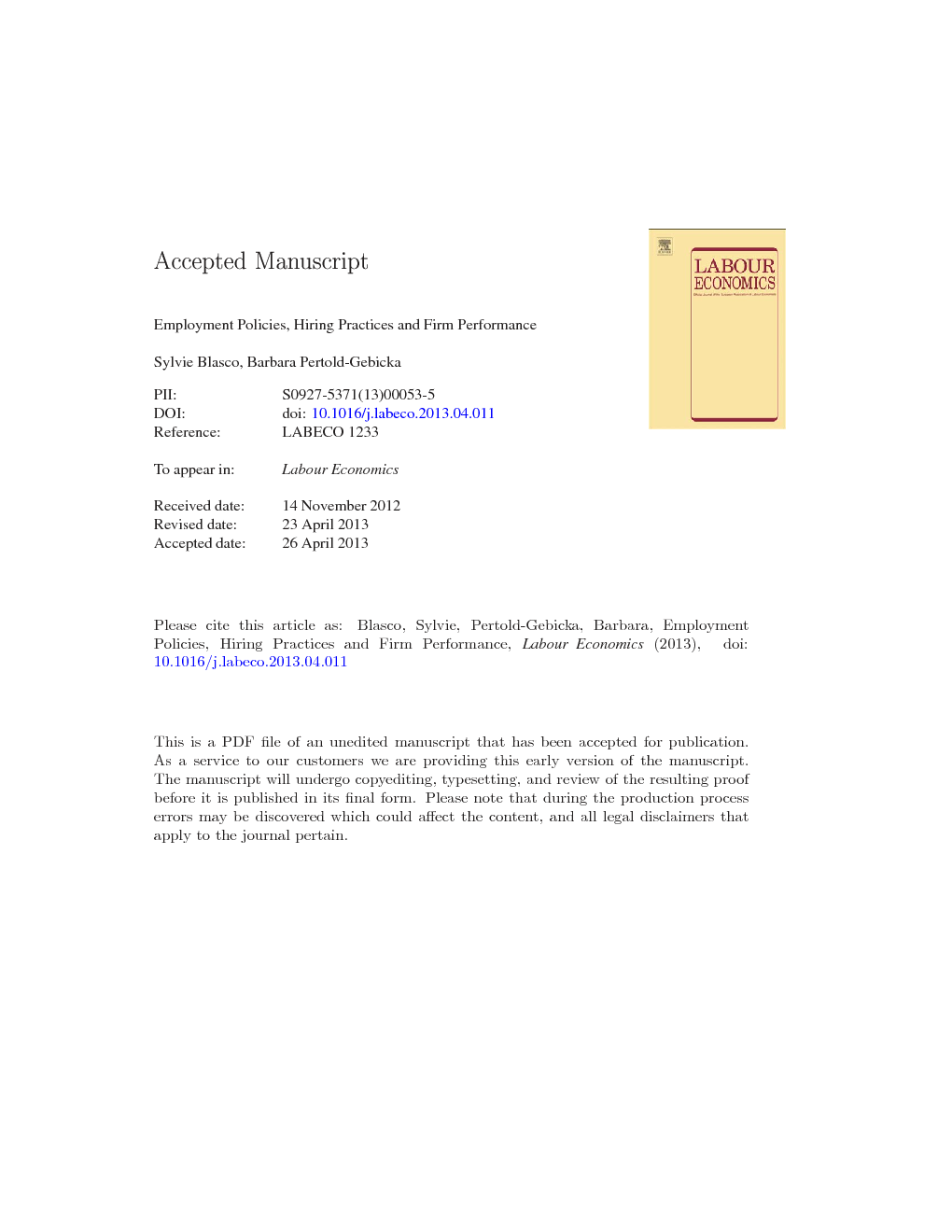 In this paper we investigate how active labour market policy programmes affect firms’ hiring strategies and, eventually, firms’ performance. We focus on counseling and monitoring which may reduce search costs for employers, but which may also have ambiguous effect on the employer-employee matching quality and thus on firms’ performance. Using a large scale experiment which was conducted in Denmark in 2005-2006 and induced a greater provision of activation, we find that small firms hiring in the districts where the social experiment was conducted changed their hiring practices in favor of unemployed workers and experienced greater turnover than other firms. Treated firms also experienced no change or a marginal reduction in value added and total factor productivity during the first years after the experiment. These results are consistent with the idea that monitoring creates compulsion effects which counteract the possible improvement in the matching process expected from job search assistance.

In most European countries active labor market policy programs (ALMPs) were largely developed over the past decade. The rich literature evaluating these programs almost exclusively focuses on outcomes related to individuals participating in the interventions (see the meta-analysis by Kluve, 2010 or Card et al., 2010). Recently, also general equilibrium effects of ALMPs have been evaluated (Crépon et al., 2012, Ferracci et al., 2010 and Gautier et al., 2012) with a focus on nonparticipants indirectly affected by these programs. Although equally important, the evidence on how ALMPs may affect firms is very limited (Gautier et al., 2012 and Lechner et al., 2012). While there is a growing empirical literature showing that diversity in the workforce demographic composition has an effect on firms' outcomes,1 there is a lack of empirical evidence on the effect of workforce diversity in terms of ALMP participation history on firms' performance, except for Lechner et al. (2012). In this paper we offer to fill the gap in the literature by providing an empirical analysis of how two important components of ALMPs, namely job search assistance dedicated to the unemployed workers and their monitoring, affect firms' hiring decisions and performance. By investigating firm-level outcomes, we provide the missing input for complete evaluation of costs and benefits of ALMPs. Labor market institutions have strong potential to affect firms' economic performance by influencing their hiring and firing strategies. For example, employment protection legislation has been both theoretically and empirically documented to increase frictions in the labor market and thus impede hiring (see for instance Autor et al., 2007 and Pries and Rogerson, 2005 or Kugler and Saint-Paul, 2004). On the other hand, the effect of active labor market policies, such as counseling and monitoring, is not clear. Acting as an intermediary on the labor market, the public employment service has the potential to affect the employer–employee matching process through several channels. First, if effective, job search assistance helps the unemployed at finding job offers, and monitoring helps at maintaining certain level of search activity. As a result, unemployed workers send more applications. Labor market tightness is reduced, so firms open more vacancies (Pissarides, 2000) and are more likely to meet and hire unemployed workers. Second, job search assistance may help the beneficiaries at directing their applications to offers which suit their qualifications best. If so, ALMPs generate better employer–employee matches and have a positive effect on firms' performance. On the other hand, compulsory participation in activation programs creates a leisure tax on the participants (Rosholm and Svarer, 2008) so that monitoring and potential sanctions generate a threat effect. This compulsion effect lowers the value of unemployment (Van Ours, 2007) and pushes people back to work without concerns about the match quality. This may counteract the positive effects of counseling on the employer–employee match quality and damage firms' productivity. Thus, the effect of ALMPs on firms' performance becomes an empirical question. We offer to empirically evaluate the effect of ALMPs on firms' performance in the context of Denmark. Denmark is known for its flexicurity system introduced in 1994, which combines flexible hiring and firing regulations, generous unemployment insurance and social security net, and extensive active labor market policies (Andersen and Svarer, 2007). In this setup, intensification of activation policies has been consistently shown to have a strong positive effect on exit rates from unemployment for participants (see for example Rosholm, 2008). But the existing empirical evidence of both the compulsion effect on participants (Graversen and van Ours, 2008) and the displacement effect on nonparticipants (Gautier et al., 2012), suggests that counseling helps the beneficiaries at the expense of other participants of the labor market, be it the employing firms or the nonparticipating unemployed. This sheds doubt on the hypotheses that firms hire more unemployed workers and have better market performance when the provision of ALMPs increases. We use a Danish linked employer–employee dataset, which provides a unique panel of firms and workers, combined with accounting data to test the above hypotheses. Because we expect firms' workforce composition to be endogenous to their performance, we use a large-scale social experiment conducted in Denmark in Winter 2005/2006 that provided exogenous increase in the provision of ALMPs for firms hiring in the treated regions. We implement a panel Difference-in-Difference strategy to evaluate whether this increased provision of ALMPs changes hiring strategies of firms in favor of the unemployed, which, in turn, would lead to changes in firms' workforce compositions and affect various measures of firms' performance. We run the analysis separately for small, medium-size and large firms, as they may be affected differently by the experiment. We find that within a year following the experiment small firms which labor markets were significantly affected by the experiment hire slightly more workers from the pool of unemployed and experience greater workforce turnover. Regarding firms' performance, we find that the experiment had no or only marginal detrimental effects on firms' productivity in the short run. We find no effect for larger firms, which hiring strategies seem not to be affected by the increased provision of ALMPs. These results run along with those found by Lechner et al. (2012) for the German case, and are consistent with the hypothesis that the compulsion effect acts against the counseling effect, so that intensive counseling and monitoring improve the matching process, but not firms' performance. The rest of the paper is organized as follows. Section 2 reviews the literature and proposes a stylized matching model to underline the theoretical mechanisms. Section 3 presents the empirical question and strategy and Section 4 discusses the results. Lastly, Section 5 concludes.