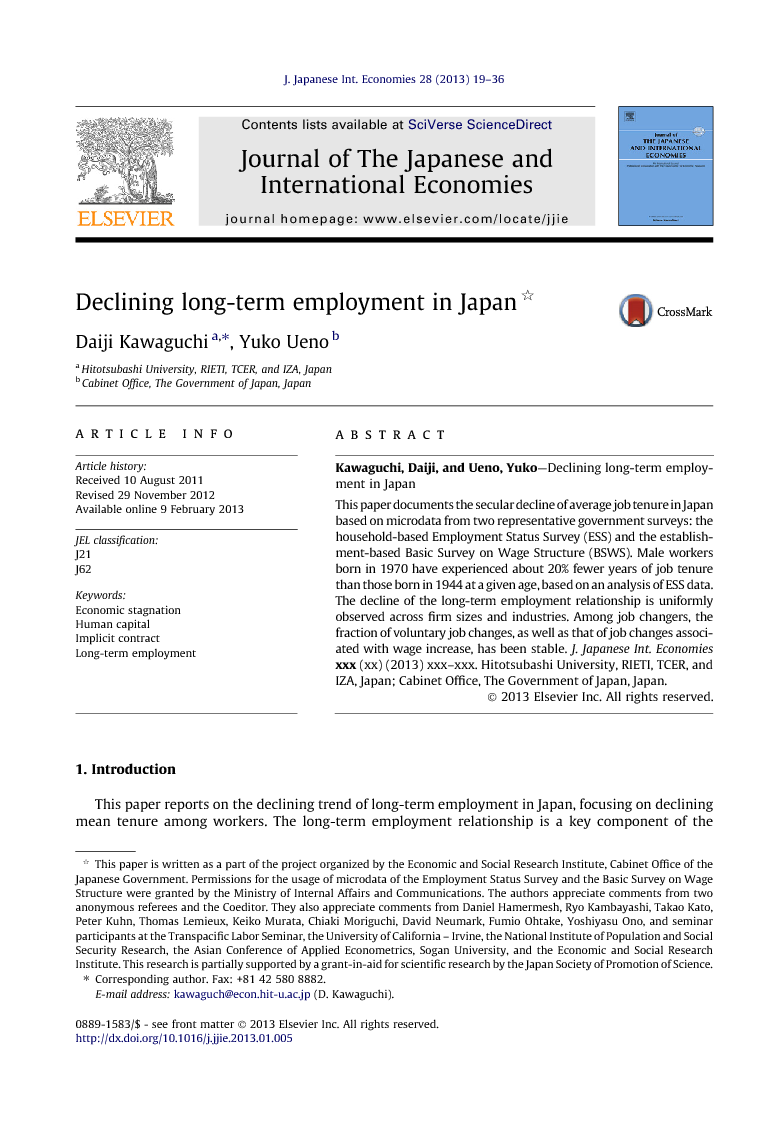 This paper documents the secular decline of average job tenure in Japan based on microdata from two representative government surveys: the household-based Employment Status Survey (ESS) and the establishment-based Basic Survey on Wage Structure (BSWS). Male workers born in 1970 have experienced about 20% fewer years of job tenure than those born in 1944 at a given age, based on an analysis of ESS data. The decline of the long-term employment relationship is uniformly observed across firm sizes and industries. Among job changers, the fraction of voluntary job changes, as well as that of job changes associated with wage increase, has been stable.

This paper reports on the declining trend of long-term employment in Japan, focusing on declining mean tenure among workers. The long-term employment relationship is a key component of the so-called Japanese employment system, along with seniority wage determination and enterprise labor unions. We argue that the declining trend of long-term employment found in this paper is a natural consequence of the low growth rate after the high-growth period ended by the early 1970s, because the Japanese employment system is considered to foster firm-specific human capital and the lower growth rate decreases the rate of return to all types of assets, including firm-specific human capital. Hashimoto and Raisian (1985) and Mincer and Higuchi (1988) document that Japanese workers are more attached to their employers and their earnings-tenure profiles are more steeply sloped than US workers, based on observations around 1980. These features are interpreted as being part of the Japanese employment system, which aims to foster firm-specific human capital.1 Since these classics were written, the Japanese economy experienced a two-decades-long stagnation after 1991; academics have debated whether long-term employment practices have survived through the long-term stagnation. Contrary to popular belief, a number of studies report that long-term employment practices are resilient among core workers, regardless of the long-term stagnation of the Japanese economy (Chuma, 1998, Kato, 2001 and Farber, 2007, and Shimizutani and Yokoyama, 2009 and Kambayashi and Kato, 2011). Hamaaki et al. (2011) is an exceptional study that emphasizes the erosion of the Japanese employment system, pointing to a flattening age-wage profile and a declining share of lifetime employees among youth. Ono (2010) reconciles two seemingly conflicting views by pointing out two facts: (1) the share of workers who are in the system has declined, and (2) the probability of job separation has remained stable for those who are already in the system. If we focus on the first aspect, the Japanese employment system seems to be eroding, whereas if we focus on the second aspect, the Japanese employment system seems resilient. Kambayashi and Kato (2012) also report a declining share of core workers among youth and the resilience of long-term employment practices among core workers. This paper contributes to the literature by examining the change of age-specific mean tenure by birth cohort based on a method proposed by Farber (2007). Age-specific mean tenure among all workers has merit to capture the decreasing share of regular workers (Seishain), who are assumed to hold long-term relationships with firms to jointly invest in firm-specific human capital. This makes a stark contrast to the influential studies, such as Hashimoto and Raisian (1985) and Kambayashi and Kato (2011), that rely on the retention rate, defined as the probability of remaining in the same company for y years conditional on a worker working for the same company for x years, which does not capture the decrease in the share of workers who start their career as regular workers. In addition, the cohort-based analysis captures the change of employment practices among new entrants into labor market, which is important because far-sighted firms do not have incentives to renege on implicit long-term contracts with existing regular workers, for fear of losing their reputation (Kanemoto and MacLeod (1992)). The analysis finds the secular decline of long-term employment based on microdata of a household survey, the Employment Status Survey (ESS), and an establishment survey, the Basic Survey on Wage Structure (BSWS). The analysis based on the ESS implies a secular decline of the average years of job tenure among workers born after 1944. Male workers who were born in 1970 have about 20% fewer years of job tenure than workers who were born in 1944, and this decline is quantitatively similar to the corresponding US figures reported by Farber (2007) based on the Current Population Survey.2 An analysis of females based on the ESS indicates the average years of job tenure compared with the 1944-born cohort had decreased after the birth cohort of the 1970s. Overall, the analysis based on the ESS indicates a secular decline of the long-term employment relationship among male workers born after 1944 and female workers born after 1970. In contrast, the analysis based on the BSWS implies a slower decline among male workers and an increase followed by a decrease of such constancy among female workers. We find that the discrepancy of the results based on the ESS and the BSWS is attributable to the different sampling schemes of the two surveys. The ESS is a household survey that is comparable to the Current Population Survey in the US, whereas the BSWS is an establishment survey that records individual workers’ years of job tenure based on establishments’ payroll records. The BSWS’s sampling procedure tends to include establishments with longer business histories, and the establishments’ payroll records are more likely to include workers with traditional employment contracts. In sum, Japanese workers enjoy longer-term employment than their US counterparts, but both groups of workers have experienced a quantitatively similar decline of mean tenure, as long as the analyses are based on comparable household surveys and a consistent method. We further find that male workers in all industries and firm sizes almost uniformly have experienced declining long-term employment. This finding casts doubt on claims that declining long-term employment is caused by industries’ compositional change, or that larger firms stick to their long-term employment practices. We do not find any evidence that recent job changers are voluntary job hoppers. The fraction of voluntary job changers, as well as that of job changers experiencing a wage increase, has been almost stable for the last 40 years. After all, a falling tide sinks all boats. We argue that the end of the high-growth period in the early 1970s decreased the rate of return to firm-specific human capital, and it also diminished the benefits of the Japanese employment system.